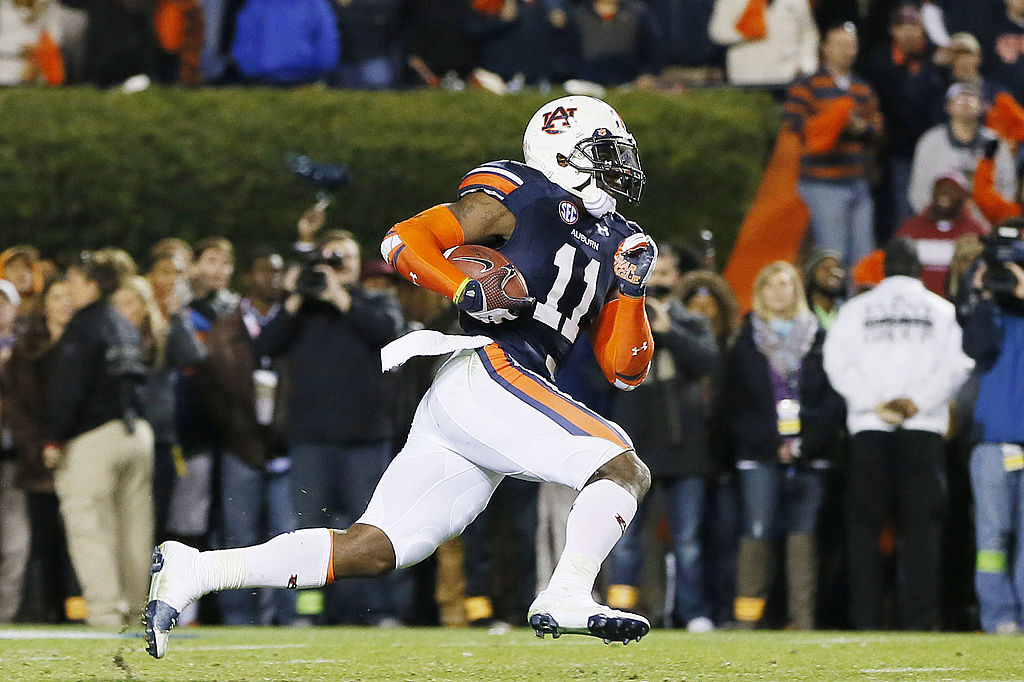 Since they first played each other in the winter of 1893, and annually since 1948, the fierce Alabama-Auburn rivalry has become known as the biggest and most passionate in all of college football.

Of the 80 Iron Bowl meetings between these two storied programs, their matchup on Nov. 30, 2013 has gone down as one of the greatest games in the history of the sport, pro or college. Chris Davis’ 109-yard return of a missed field goal with no time remaining on the clock at Auburn’s Jordan-Hare Stadium gave the 4th-ranked Tigers an improbable 34-28 win over the top-ranked Crimson Tide, providing a finish to a contest that may never be topped. The game did an 8.2 Nielsen rating on CBS, one of the highest rated regular season college football matchups ever.

In honor of the anniversary of the Kick Six— as the play and the game became known— and the final year of Verne Lundquist calling the Iron Bowl, Awful Announcing has put together an oral history of the matchup through the eyes of the CBS announcers, directors, and producers that helped broadcast this truly historic event.

PART ONE: The Leadup
PART TWO: The Decision
PART THREE: The Kick
PART FOUR: The Aftermath
PART FIVE: The Legacy

PART ONE: THE LEADUP

Verne Lundquist, SEC On CBS Play By Play Announcer— I think there’s no more intense rivalry in all of college football, and I’ve seen a lot of them. I don’t know how many Texas-Oklahoma games I’ve done, maybe eight or nine. I’ve been to USC-UCLA. I was a sideline guy, believe it or not, on Michigan-Ohio State back when I was still at ABC.

So I’ve seen rivalries. Auburn-Georgia is a rivalry. But there’s nothing that equals the passion for Auburn and Alabama. It truly is 365 days a year.

Auburn was 9-1 going to the game, and Alabama was an unbeaten 10-0. But to get to this point with only one loss, the Tigers had to pull off a miracle win two weeks earlier at home against Georgia.

With 36 seconds left in the game, Auburn trailed 38-37. This game, coincidentally, was also being televised by CBS. Tigers quarterback Nick Marshall went back to throw, and made a very poor decision that worked out unimaginably well. Georgia safety Josh Harvey-Clemons tipped the ball right into the hands of wide receiver Ricardo Louis, who raced 73 yards for the game winning score known as The Prayer At Jordan Hare.

Gary Danielson, SEC On CBS analyst— That was a play where everyone did everything wrong. Everybody. Even the guy who threw it. He had a guy wide open for a first down. Everyone on the bench was pointing to the guy he should’ve thrown it to. He throws it to the wrong guy. Auburn was completely out of sync. They couldn’t even, basically, call a play at the end and they end up winning the game.

Lundquist— Gary, as we were going off the air, said “that’s the greatest finish I’ve ever seen to a college football game. We’ll never, ever see anything again like that.” Well, it took us two weeks [laughs].

Steve Milton, SEC On CBS Producer— There was a lot at stake. Alabama essentially clinched an SEC championship berth [with a win] and could go on and with a national championship. They’re playing their archrival, in Auburn.

Craig Silver, SEC On CBS Director— It was a highly anticipated game. It was a rivalry game. It was one versus four. Auburn had come on at about mid-season and won a bunch of close games and sort of found themselves.

The conventional wisdom was that even though it was two highly ranked teams and it was the Iron Bowl and it was at Auburn, that Alabama was the defending national champs. They were a powerhouse team and they were untouchable. But it was a competitive game, back and forth. Clearly Auburn could go toe to toe with them. The running game was working great for Auburn.

Danielson—  It was thought that Alabama had the superior team and that getting it to overtime was to their advantage. It was the unique somewhat triple-option type offense that Nick Marshall hit one big run. I thought they had control of the game, but the uniqueness of the Auburn offense had kept them in it, almost like the triple-option, a Navy-type offense, that kept them on their heels.

Tracy Wolfson, SEC On CBS Sideline Reporter—  I remember [Auburn head coach] Gus Malzahn saying to me at halftime, “if it’s close in the fourth quarter, I like our chances!” 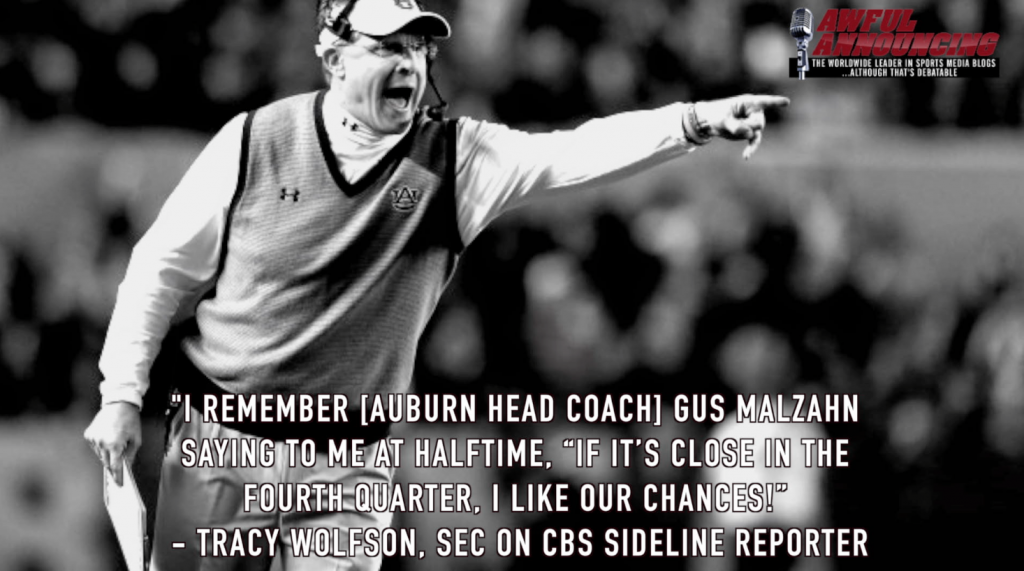 Lundquist— I don’t know from start to finish if it was the greatest college football game ever, but I do know that the fourth quarter lived up to that billing.

We began the fourth quarter with a tied game, 21 all, and A.J. McCarron, from his own one yard line, went down the right sideline and hit Amari Cooper with what turned out to be a 99 yard touchdown pass. And it’s almost an afterthought.

Silver— That was the play of the game, and that was his Heisman moment.

Lundquist— Here we are, now it’s 28-21 for almost the remainder of the fourth quarter, until all of a sudden with 32 seconds left in the game and Nick Marshall hits Sammie Coates out on the left side [for a 39-yard TD pass].

Silver— And then we get down to the end of the game.

Auburn kicked off, and Alabama returned it to its own 29 yard line. After an incomplete pass and a seven-yard run by running back T.J. Yeldon, Crimson Tide head coach Nick Saban called timeout with seven seconds left and the ball at its own 36.

Danielson—  They really didn’t want to throw the ball that much in that situation, because they had the ability to go to overtime and they didn’t want to make a mistake. A mistake there could have proven fatal. So they were being very conservative as that last drive broke out.

Lundquist— I think we all remember T.J. Yeldon breaking loose across the 50 and he went towards the far sideline, which was the Alabama bench. And he stepped out of bounds, and the initial ruling was no time left on the clock.

Silver— Yeldon goes out of bounds and Nick Saban is begging to put one second on the clock.

Lundquist— Matt Austin was the referee. And Nick Saban threw the flag and demanded a replay. He challenged the call, and it must have taken five minutes for them to make a determination.

And I showed the initial replay with the clock, but you couldn’t see Yeldon’s foot. And we showed another replay with Yeldon’s foot, but no clock. And I’m on the phone with the replay official and I’m begging him, and saying “you’ve gotta give me some time here.”

Danielson— We were working really hard, the producer and I and the replay truck, to find the perfect angle and to sync up the clock with that replay.

Silver— Everybody wanted to get it right and everybody was willing to wait until we could provide all the information that we had, all the angles. Once I would say to him, as I do every review official— and I’m sure the other TV producers do— I’ve got nothing else to show you, that’s when they make their decision.

Lundquist— We kept showing them everything that we had, Craig Silver did down in the truck. And he said to Gary and me, “keep talking, because they’re asking us to synchronize and end zone replay with the game camera replay.”

Silver— If you give me time, I’ll get you a split screen that’ll be perfectly in sync, and it’ll show the clock and the foot. I don’t know whether it’s zero or one, and I certainly have no vested interest.

Milton—  It was all great time to build up drama. Usually you have rapid-fire plays and you maybe have 10 seconds to set something like this up. We had minutes.

Lundquist— They synched it up, finally. I bet it was five minutes. And Gary and I, we both kept going after the same thing over and over, and it was very definitive.

Silver— And they just hung with me, and everybody wanted to get it right. And we eventually showed that split screen, and the split screen was very definitive that there was one second left as his foot went out of bounds.

Lundquist— Matt Austin quite famously said, please put one second back on the clock. And they did.

Danielson— That’s when they realized that they had a chance to make one more play.

Wolfson— It happened to have been that I brought my husband and my three boys with me on that trip. And I said “no worries, come down at the end of the game.” And they came down a little before, expecting it would be over.

Milton— There was so much going on in the sense that it was a tie score, there was a second left, it was a rivalry game.

Silver— So now the next assumption, at least in the truck, was that they would throw a Hail Mary.

Danielson— So now I’m assuming they’re going to throw a Hail Mary. In my mind, it’s too far to kick a field goal. That’s my initial thought. So who would be on the field, who might be out there for Auburn to knock it down?

PART ONE: The Leadup
PART TWO: The Decision
PART THREE: The Kick
PART FOUR: The Aftermath
PART FIVE: The Legacy