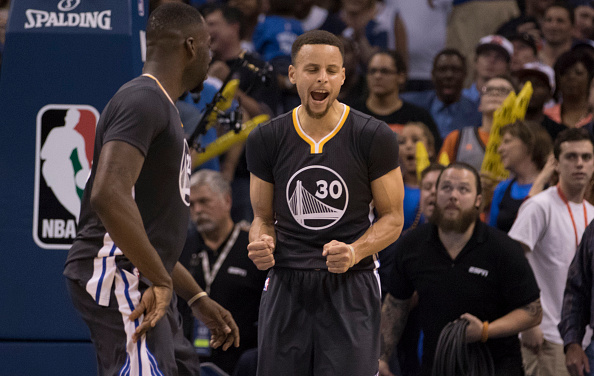 Stephen Curry has been on fire all season long for the Golden State Warriors, but now ESPN has really made it official by putting him in NBA Jam-style commercial.

In a promo for next Wednesday’s NBA on ESPN doubleheader featuring the 61-6 Warriors hosting the rival Los Angeles Clippers, ESPN brought in Tim Kitzrow, the original NBA Jam voice, along with the legendary game’s signature graphics and catch-phrases.

“Yes!”, “razzle dazzle,” “boomshakalaka,” “he’s heating up” and “he’s on fire” return from the original 1993 Midway arcade two-on-two classic to describe Curry’s other-wordly mastery of the league. Curry’s been better than the video game version of himself anyway, so a commercial featuring NBA Jam Steph seems appropriate.

The 30-second spot shows Curry’s name at the top of the screen in that antiquated NBA Jam font, the ball light up when he picked an opponent’s pocket and, of course, the ball being trailed by fire as he launches one of his patented deep threes through the net.

The game became an immediate hit and a pop culture sensation, becoming a ubiquitous and important part of 90’s culture, helping children around the country develop and grow the love for the NBA game.

When NBA Jam came out 23 years ago, the game didn’t include Michael Jordan’s likeness, since he owned his own likeness rather than the NBA. With this commercial, we can now get a glimpse of what NBA Jam would be when it features the league’s best player.

The commercial adds in what we’ve all been thinking: Steph Curry is a cheat code. “This is cheat mode. This is your game,” the commercial reads, before telling us who’s actually playing on Wednesday other than Curry. It’s a clever melding of current and past pop culture, putting Curry into video game mode while he puts up video game numbers.