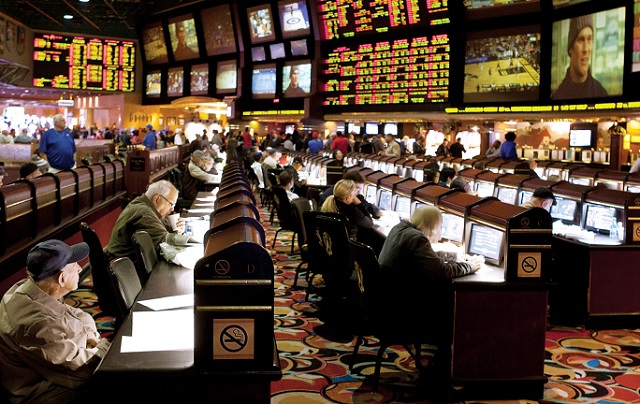 Is it time for TV networks to embrace sports gambling beyond the less-than-veiled references sometimes snuck into play-by-play by broadcasters like Brent Musberger and Al Michaels? According to one study, both the networks and the sports they televise would benefit from sports betting, and should thus join the effort to legalize it in the United States.

Yahoo! Finance’s Daniel Roberts shared the results of the study conducted by Nielsen which suggests that viewers who have some money riding on sporting events are far more likely to watch and talk about them, and will almost certainly be more engaged in the event, whether through TV, sports apps and fantasy sports sites. The study was commissioned by the American Gaming Association, which obviously isn’t an objective body in this debate. But the numbers cited by Nielsen in Roberts’ article are notable.

“For the study, first shared exclusively with Yahoo Finance, Nielsen surveyed 1,500 American adults, 500 of whom were “pre-qualified NFL bettors.” The highlights from the report are: Adults who placed a bet on the NFL watched 19 more games last season than adults who didn’t bet; those who placed a bet more than doubled the TV ratings of average viewers; bettors make up just 25% of the NFL audience, but watch nearly 50% of all NFL regular season game minutes.”

And those bettors would be more engaged. Another example beyond the NFL is NCAA March Madness: those who visited March Madness bracket or fantasy sites or apps during March 2015 watched, on average, 20% more of the games than those who did not.

More people watching more games obviously means better ratings and more eyeballs for advertisers. Furthermore, 65 percent of the people surveyed in the Nielsen study said they were more likely to talk about a game on social media if they placed a bet on it. The same viewers could also very well say something about an ad they saw during the game. (How many times have you tweeted about a commercial while watching a game?)

No wonder executives like NBA commissioner Adam Silver have spoken out in favor of legalizing sports gambling. What if execs from some of the NFL’s television partners like NBC and ESPN join him after looking at these numbers? As the Nielsen study argues, allowing sports betting is in the best interests of TV networks and advertisers. And it’s not something that viewers look upon unfavorably either.

Well, maybe unless gambling sites suddenly flooded commercial breaks during sporting events with ads for their services, like DraftKings and FanDuel did after Labor Day last year. But this isn’t about accepting ads from websites and casinos. It’s about getting more viewers engaged in a product already offered.

Besides, it’s not like this isn’t already happening. Sports gambling is one of many reasons the NFL is already so popular. It’s not just your Uncle Brent and Uncle Al betting on games. This would just bring it out from the shade into the sun. As the saying goes, sunlight can be the best disinfectant. Although TV networks and advertisers would rather have the money instead.