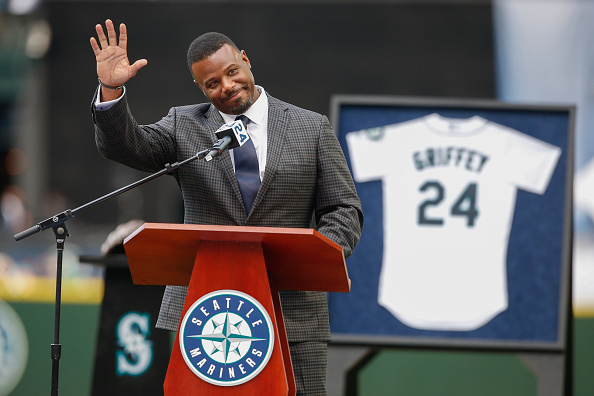 Fresh off his induction into the Baseball Hall of Fame, Ken Griffey Jr. is going to be doing some TV work, and covering the Seattle Mariners to boot. ESPN announced Thursday that Griffey will be a guest analyst in the booth for the entire broadcast of the Mariners-Yankees game this coming Tuesday.

Here are more details from the release:

Hall of Famer and 13-time MLB All-Star Ken Griffey Jr. will be a guest analyst in the booth for ESPN’s entire telecast of the New York Yankees vs. Seattle Mariners game presented by USAA on Tuesday, Aug. 23 (10 p.m. ET, ESPN). Griffey, who played more than a decade for the Mariners, will join play-by-play commentator Jon Sciambi and analysts Rick Sutcliffe and Doug Glanville.

Griffey, who was enshrined in the National Baseball Hall of Fame this year, also played for the Cincinnati Reds and Chicago White Sox during his 22-year MLB career. He retired in 2010 as a Mariner after playing his first 11 MLB seasons in Seattle (1989-99).

Griffey’s return to Seattle coincides with the Mariners’ first home appearance on ESPN since 2011. The telecast will be available nationally.

It may be well worth watching how Griffey does in this role. He hasn’t done a lot of television since retiring in 2010, but he’s certainly offered some interesting thoughts over the years, and he has an extremely high profile. It also will be worth keeping an eye on how he meshes with Sciambi, Sutcliffe and Glanville (that’s an awfully crowded booth, so there won’t be a ton of time for each analyst), and how he talks about the Mariners, a team he not only played for, but worked for as a consultant after his playing career and a team that has inducted him into their Hall of Fame and retired his jersey earlier this month.

Granted, Griffey may be here more for an emotional perspective on the Mariners than for no-holds-barred analysis, but covering a team you played for is always an interesting test for an analyst.

It’s also noteworthy that this is the first ESPN-broadcast first Mariners home game since 2011. Yes, they’re on the West Coast, so their game times aren’t always a good fit for ESPN’s windows, and yes, they’ve had some atrocious seasons over the last few years, but this does also speak to some of the complaints about how certain teams don’t get much national coverage. Picking up Griffey as a guest analyst for this broadcast seems like a good way to boost ESPN’s popularity with Mariners fans, though.