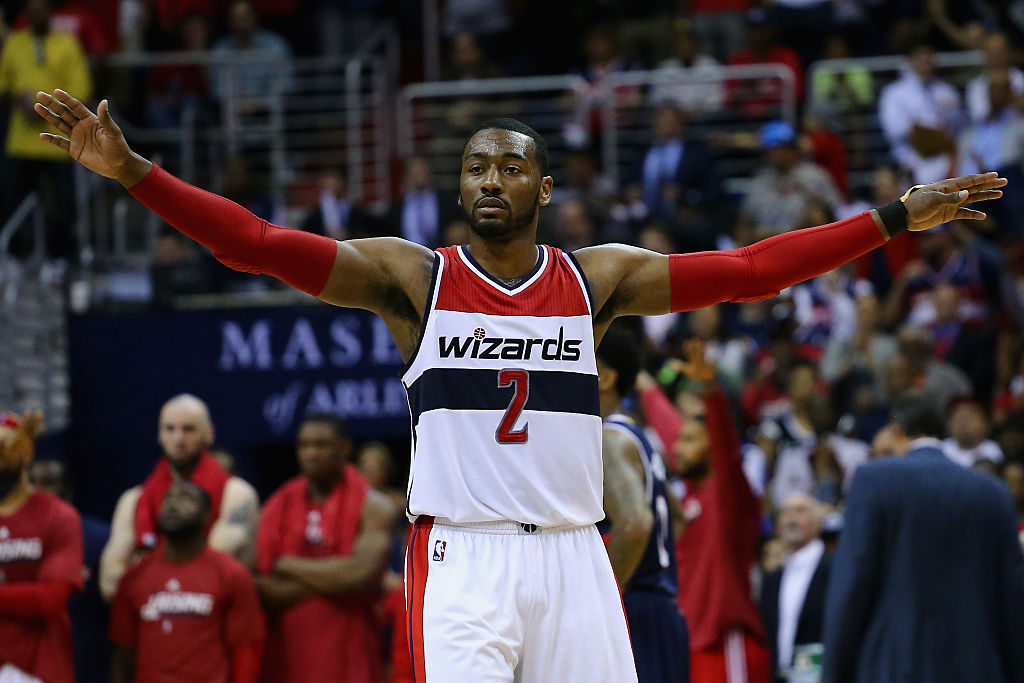 Which games get televised nationally and with what sort of prominence is always an interesting discussion in any sports league, and there are a lot of factors that go into it; what teams draw audiences? What matchups draw audiences? What players draw audiences? How much does a league want to promote all of its teams versus its best-drawing teams? Those on the losing side of these discussions tend to see something sinister that usually isn’t there, though, and the latest to do so is Washington Wizards’ guard John Wall. Wall took to Twitter Wednesday to complain about ESPN dropping a Wizards-Celtics game for a Thunder-Grizzlies one:

LolRT @InsideHoops: ESPN has removed Wizards vs Celtics from their January 11 NBA broadcast schedule and … https://t.co/jAXdiEZhre

@blk_tray it be crazy bra

Candace Buckner of The Washington Post then wrote this up as Wall suggesting it’s a conspiracy:

In pop culture, your stereotypical conspiracy theorist has crazy eyes and an overgrown beard, lives in the backwoods and tries to convince the Internet on the existence of UFOs.

John Wall doesn’t fit that description. And yet, on Wednesday night, Wall sat isolated in his corner spot of the Washington Wizards locker room, his eyes lighting up and rapid-fire voice picking up as he spoke on a favorite topic: how the Wizards get no love. This time, he has proof.

“It’s a prime example to that conversation we had that day,” Wall told The Post. “We don’t get national exposure.”

…“I know you got to be able to win,” Wall said. “We didn’t get off to a great start [like] we wanted to, but we do have an all-star that’s been in the All-Star Game three times: me. And hopefully I can be [an all-star] again, and hopefully we can add Brad [Beal] and somebody else. We had five [national games] at the beginning of the year, and now we have four. And you never know, they might take another one. I feel like it’s back to what I said before: If you don’t have League Pass or NBA TV, you don’t see the Wizards.”

Wall’s previous argument, referenced there, is that he’s not named to all-NBA teams (and thus, not eligible for the new high-paying designated veteran deal) because he doesn’t get enough national television exposure:

“We don’t play on TV a lot so a lot of people don’t get to see us play. If you don’t have NBA League Pass and stuff like that, you don’t see the things that I’m doing in the game or what we’re doing trying to win,” Wall said Thursday. “So if you ain’t checking on Twitter and stuff like that, you don’t know. All these other teams get a lot of TV games, that’s why they get these accolades from the media and fan votes. Until we get an opportunity to be on TV more, it would be tough for people to realize and see what I do.”

The conspiracy here is ESPN doing exactly what they should from a business perspective, though; trying to broadcast games that will appeal to the most viewers nationwide. There’s a strong case that Oklahoma City – Memphis is a more important game to broadcast than Washington – Boston. For one thing, the Thunder (20-12) and Grizzlies (20-14) have better records than the Wizards (15-16) and Celtics (19-13). There’s also Russell Westbrook’s string of triple-doubles, which have sparked a national conversation and added interest in the Thunder. For another, as Buckner’s piece notes, Washington broadcasts have been worse for ESPN than the average; the four Wizards games ESPN televised in 2015 drew an average of 1,397,000 viewers, a decrease of 15 per cent from their NBA on ESPN average of 1,652,000.

Despite their area’s larger population, it seems hard to argue that a below-.500 Washington team will be a better draw than the Thunder or Grizzlies. The more attractive team in this matchup is Boston, but even that wasn’t enough to prevent ESPN from swapping this one out. That’s their right, as specified in their TV contract, and they’re right to make that call from a business perspective. Not showing the Wizards doesn’t have anything to do with any conspiracy against Wall or Washington; it’s about the Wizards not being a good team, and not being a team that draws much national interest.

The counterargument is that showing less-popular franchises nationally is ultimately good for the league and for broadcasters by growing the overall game. There’s maybe a bit of a long-term case there, but recent seasons have suggested that parity isn’t necessarily that desirable for broadcasters, at least in the short term. The success of teams like Golden State and Cleveland and their emerging rivalry has been great for the ratings. Also, it’s more the league’s responsibility than the broadcasters’ to ensure that everyone gets some national TV time; that’s in the league’s interest, not necessarily the broadcasters’ interest, and that’s why those restrictions typically come from the league side in contracts.

If Wall wants to live in a world where national TV broadcasts are parceled out evenly regardless of how much of a draw teams actually are, he should take that up with the league. He might also want to consider that this could lead to him making less money. The NBA’s current salaries are thanks largely to their giant TV deals, and those deals only provide value for broadcasters if they have substantial ability to show the best teams.

Where the discussion of national broadcast scheduling being unfair actually has some merit is if a case can be made there’s a bias against smaller-market teams regardless of their success. It may still be in the broadcasters’ best interests to show poorly-performing large-market teams, but doing so always and forever can cause some long-term damage; they need to find a mix of showing teams with big fanbases and showing teams that do well, and they need to offer some opportunities for teams to become national staples if they do do well. However, the NBA and its broadcasters actually do this well; their biggest and most-scheduled teams come from Golden State and Cleveland, and that’s about success, not market size.

The NBA rewards successful teams with national appearances, and the fans tune in for those. In fact, Wall’s complaint illustrates how well the NBA does this. Other sports might always take a Washington-Boston matchup over a Memphis-Oklahoma City one based on market size regardless of the quality of the teams. The NBA instead generally rewards teams that do well. (One exception, and a team that does have a point when they complain about a lack of national appearances, is the Toronto Raptors; however, that’s mostly about their market not being counted in U.S. TV ratings, and that’s also not the league or the network’s fault.)

If Wall wants to be on national TV more, perhaps he and his teammates should strive for a better than .500 record? There’s every indication that if the Wizards actually were consistently good, ESPN and other national broadcasters would be quite willing to televise them. National broadcasters would probably love to have a well-playing, well-drawing team from the giant D.C. metropolitan area. However, at the moment, the Wizards are not playing well or drawing well. Maybe that’s what they should focus on, not the conspiracies.

Oh, and as for Wall and his complaints about the media not picking him to all-NBA teams? They’re doing their job, and it doesn’t have much to do with how much TV time he gets. Here’s the list of the All-NBA teams for 2015-16; the guards are Steph Curry and Russell Westbrook (first), Chris Paul and Damian Lillard (second), and Klay Thompson and Kyle Lowry (third). All of those players except Thompson posted a much better Player Efficiency Rating than Wall (they were first, third, fifth, fifteenth, and sixteenth respectively), and they were also ahead of him in win shares. James Harden (eighth in PER, sixth in Win Shares) had a better argument for inclusion than Wall.

Wall has his own strengths, of course. He averaged close to 20 points and 10 assists nightly last year, and while efficiency metrics question his volume shooting, he can still be a valuable player. He’s also regularly picked as an all-star. There isn’t much to suggest he’s one of the league’s absolute best, though, or that ESPN’s broadcast schedule and the media who vote for all-NBA are somehow conspiring to keep him down. If he plays better, he’ll get those honors, regardless of the number of national broadcasts he’s on. If his team plays better, they’ll get more national broadcasts. But sure, blame it all on conspiracies and not getting respect.