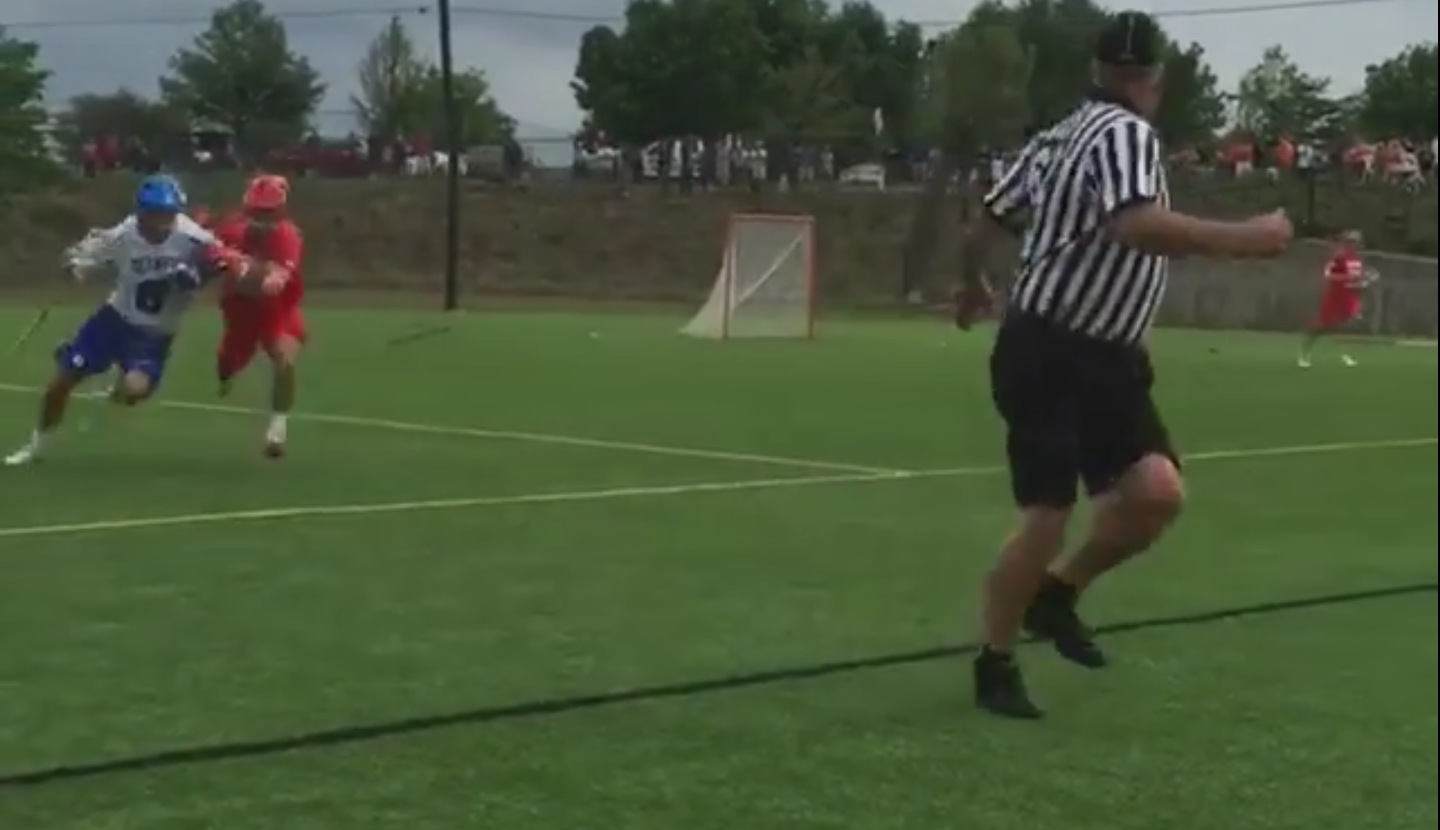 Both teams are contenders for a spot in the NCAA Tournament. Let’s just say, its about to go down.

Thousands of fans are tuned in to ESPNU to root for their alma mater. As intense as the matchup is, out of nowhere both teams meet an opponent they can’t defeat. Rain.

It’s such a torrential downpour that the teams eventually have to move to a new turf field. This is not the outcome that fans or officials with the ACC expected. To make matters worse, ESPN has cameras set up all across the field to telecast the game and it would take hours for ESPN’s staff to tear down their equipment and move to a new location.

How would ACC fans get a chance to watch their beloved teams clash it out for the title? This is where ACC host Jeff Fischel comes in. Quick thinking won Fischel acclaim from his bosses & eager fans. He asked ESPN representatives if he could stream the last 20 minutes left in the game on his phone. Since ESPN was no longer televising the game they approved.

Fans were able access to the game from a personal point of view on the field through Fischel’s iPhone along with a link to the game’s stats. Dedicated supporters also commented in real time as the stream took place on the ACC’s official Facebook page which is no surprise since Facebook users comment 10 times more on live videos than they do on regular video. 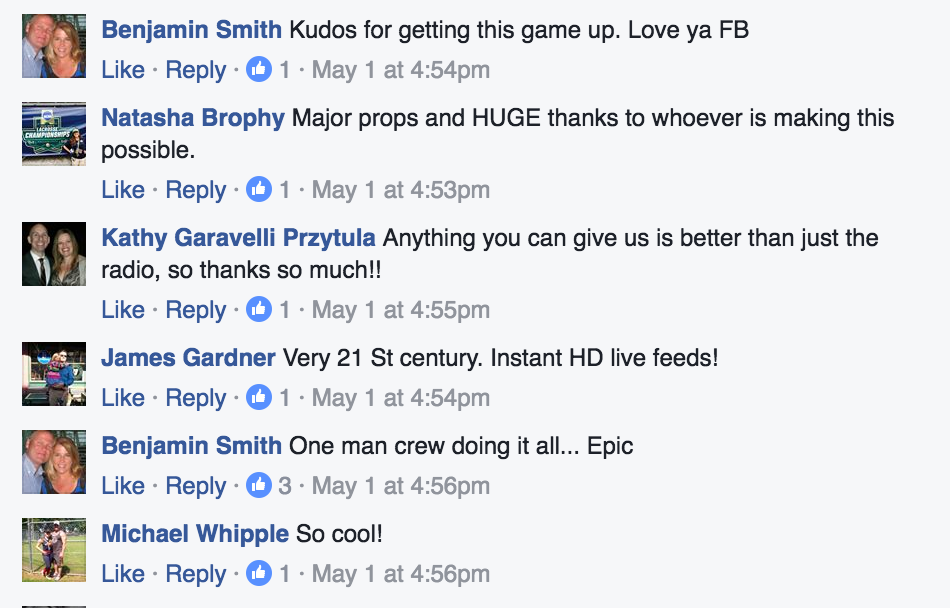 This is just one example of how Facebook Live is transforming the way we watch sports and the types of events sports fans have access to.

In today’s app ecosystem, there are a plethora of live streaming apps available whether its Meerkat, Periscope, Stre.am, MeVee, YouTube, UStream, Livestream etc. Some are distinguished by genre such as Live.ly which is specifically tailored for music fans, or feature major online stars like YouNow, or they’re compatible with other apps such as Periscope which is integrated into Twitter’s platform.

But only one has conquered. Although I have to admit, it’s easy to conquer when you already have over a billion active users.

No other live streaming option provides the depth of ability and flexibility that Facebook Live does. The capability to either stream from your phone, a webcam or an actual camera with built-in software directly to your personal friends has catapulted this experience over other apps & websites that have been available in the past.

Morgan Dewan, Vice President of Social for Turner Sports says Facebook Live has provided them with a major advantage when aiming to reach out to fans before or after NBA games because of the built in audience of millions that the NBA, NBA TV and NBA on TNT Facebook pages already have. Turner has also been able to collaborate with partners who help enhance what users are experiencing by providing a multi-camera feed overlayed with graphics that look similar to television.

“We have learned there is definitely an appetite for live content on Facebook. Facebook Live posts –  no matter if they were produced or organic were our highest performing Facebook content during Playoffs.  We are also seeing a much more highly engaged audience when we go live versus when we provide similar VOD clips,” Dewan says.

After Steph Curry came back from an injury to face the Portland Trailblazers in Game 4 of their second round series, NBA Digital premiered a “Curry Cam” on the NBA’s official Facebook page. There was peak interest in how Curry looked in pregame warmups, so much so that the stream attracted 388,000 views. They’ve also used the platform to showcase the different attributes their on-air talent possesses – most recently, a Connect 4 game between guest analyst Rajon Rondo and Isaiah Thomas. 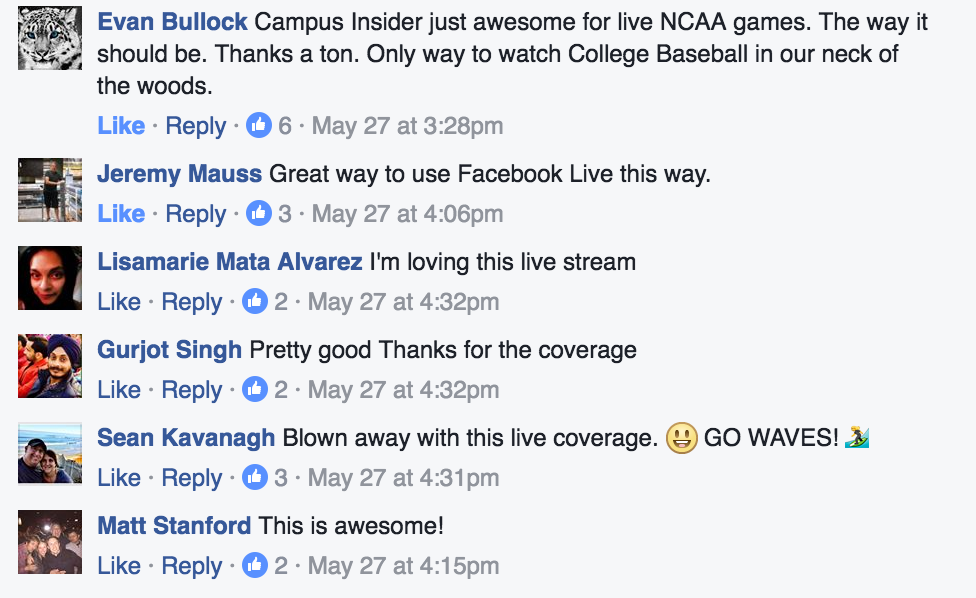 Dewan views Facebook Live as the perfect complement to a telecast saying, “this gives us another platform and distribution point to provide an additional layer of access. So while we may be using the same on-air talent and writers as on air, we’re putting them in a different format that allows for more conversation and real-time reaction.”

Golden agrees with Dewan’s sentiments and has used Facebook Live to broadcast moments you won’t necessarily find on television during a traditional broadcast window such as the Clemson Tigers field celebration at the ACC Baseball Championship or an in-depth post-game interview with an athlete or coach.

“Our core business is delivering a premium sports experience via live or on demand video, so we are constantly experimenting with new platforms that can help us grow our audience,” Golden said.

ESPN used a similar method of providing a second screen experience that doesn’t necessarily compete with television programming. When the Cavaliers won their world championship, drinks and cigars along with celebrities filled their locker room. The Worldwide Leader filmed their celebrations live on Facebook unfiltered as Scott Van Pelt broke down the X’s and O’s of how they won the title on TV. The video now has over 686,000 views.

Facebook hopes to eventually switch places from an appetizer to being the main dish. They’ve shown this desire recently after it was widely reported that the social network was in negotiations with the NFL to acquire live games. Those talks eventually fell through but it hasn’t stopped the social network’s ambition. In April, a National Women’s Soccer League game featuring the Orlando Pride became the first sporting event to air in its entirety on Facebook.

US Women’s soccer star Alex Morgan streamed the game on her page with over 2 million likes and it reached 554,000 unique viewers. Just last Saturday, Bellator MMA was watched by 556,000 people while a Major League Baseball was watched by 539,000 and The British Open received 524,000 viewers. Facebook’s averages are a little bit more inflated than Nielsen ratings but if an obscure sports league can pull off these numbers, then imagine what a major sports league could do.

Other sports leagues and teams such as AS Roma, FIBA, the World Surf League and La Liga have broadcast exhibitions and championship games that don’t get TV coverage on Facebook. FC Barcelona and Real Madrid also get paid roughly 1 million dollars by the company to showcase practices and on the field action that isn’t owned by a TV rightsholder.

It is providing niche sports with a new way to reach fans but it still may not be enough given the current media landscape. With rumors of Snapchat talking to Hollywood about original programming as well as Twitter’s new arsenal of live shows from the NBA and games from the Pac-12 and NFL, it appears Facebook has no choice but to be relentless in their push to become a main attraction for premium content sooner rather than later.

The fact that the Orlando Pride’s stream was able to gain so many viewers because of the reach of Morgan’s page also shows the power individual athletes are gaining over their employers in this technological revolution. Athletes like Russell Wilson and Michael Phelps are being paid $200,000 each to give their fans an all-access pass to their lives. It is giving athletes an unfiltered, uncensored voice to connect with the folks who indirectly pay their salary in a forum which didn’t exist 10 or 15 years ago.

With all of these positive results, it seems like Facebook Live is all rainbows and butterflies. But there is still a general sense of mistrust among content providers. Mark Zuckerberg’s creation has become a major source for referral traffic over the years but as the website changes its algorithms, traffic is at risk of going down which means sites are could begin losing revenue.

Inventions such as Facebook Live and Instant Articles, which lets you read articles directly on the Facebook app without clicking over to another site, are purposefully meant to keep you on Facebook. In public they say that changes are meant to make the consumer happier but The Guardian puts it best when they say:

Facebook wants to satisfy its users – that is, if you define “satisfaction” as pushing out whatever content will keep users glued to Facebook for as much time as possible. It’s something the company does exceptionally well. In its April earnings call, Facebook announced an increase in the amount of time people were spending on its sites: its 1.6 billion monthly users spend an average of 50 minutes daily on the likes of Facebook, Instagram and Messenger, up from 40 minutes in 2014.

Content creators believe that by providing compelling content through Facebook’s tools, they’ll develop an allegiance or trust towards them. But how does that trust and allegiance convert to the dollars that help keep these content creators running? As of now, Facebook Live does not run advertisements concurrent to the videos produced by amateurs, athletes, leagues or networks.

While all those listed parties use their resources, time, and energy to attract your attention on Facebook, the entity gaining the most from this content is Facebook itself. You’re damned if you do participate in experimenting with Facebook’s new tools but also damned if you don’t because you’ll be out of style compared to other competitors. Changes could soon be on the horizon though after Digiday reported in April that Facebook hopes to add in-stream ad options for Live videos soon.

When asked about Facebook’s power over their content on the site, Dewan referred to Facebook as a “strategic partner that helps us deliver more content to our fans.” Golden did not comment on the matter. Each outlet also said that while they have basic data that identifies how many people are watching, they don’t have specific data that breaks down viewer demographics, other content they like and engage with, or where they’re watching the Facebook Live.

Every technological advance has its high points and its low points but users of the FB Live technology definitely recognize and appreciate all of the benefits it has given them.

“If Facebook Live continues to grow at the rate that we’ve experienced so far, I can definitely see us continuing to pursue original show production,” Dewan said. “The question for Live will be identifying what resonate best with fans and how do we make it work for our business.”