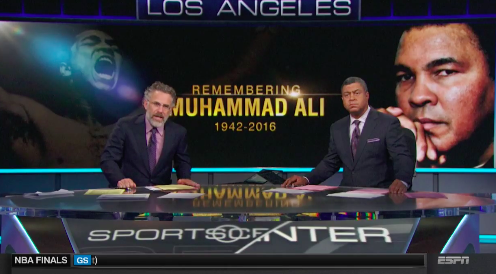 The world’s greatest boxer and one of society’s most transcendental figures passed away early Saturday morning.

Muhammad Ali, 74, died in Phoenix after suffering from respiratory issues. Cable news channels, the big four broadcast networks and sports networks responded to the tragic news swiftly breaking into their regularly scheduled programming in order to pay tribute to a legend.

NBC was the first network to break in at 12:17 a.m., according to TVNewser. NBC Nightly News anchor Lester Holt anchored a brief report from NBC’s bureau in Los Angeles before the network continued airing The Tonight Show with Jimmy Fallon.

Due to the network’s coverage of the French Open Women’s Final, NBC’s Today Show was not on air to continue coverage surrounding Ali’s passing. But before Serena Williams and Garbiñe Muguruza’s match began, NBC Sports’ Ted Robinson read an obituary covering some of Ali’s greatest moments which included exclusive footage from the 1996 Olympics in Atlanta when Ali was the last person to carry the Olympic torch and lit the Opening Cauldron.

NBC News’ Brian Williams picked up coverage on MSNBC and was joined by a cast of characters including the New York Daily News’ Mike Lupica in studio and The Nation’s Dave Zirin in D.C. Today Show’s Matt Lauer, who over the years has repeatedly called Ali his idol, joined MSNBC’s tribute via telephone along with NBC Sports’ Bob Costas, who had just finished calling a baseball game for MLB Network. MSNBC host Al Sharpton also joined the telecast which lasted for almost 3 hours.

CNN was in the middle of re-airing W. Kamau Bell’s new show, United Shades of America, but interrupted to join CNN’s International feed. Famous boxing promoter Don King was among the contributors who weighed in on Saturday morning’s news. Fox News was the last cable news network to break in at 12:33 a.m. with coverage led by Westwood One NFL reporter and Fox News contributor Jim Gray.

ABC’s Elizabeth Vargas was live in studio after anchoring 20/20 earlier that night. A pre-taped obituary from Good Morning America’s Robin Roberts recapped some of the quintessential moments in Ali’s career. Vargas also spoke with an historian who documented Ali’s boxing triumphs. The historian, in studio, was still shocked by the news at the moment but also pointed out that it was news he had been expecting all night.

ABC Sports and Howard Cosell played a major role in showcasing Ali to the world. Cosell’s interviews with Ali displayed his personality and helped create the greatest boxer’s persona. In ABC’s 20-minute special report, the network made sure viewers at home were aware of that symbiotic relationship by airing clips of previous interviews and discussing the bond Ali and Cosell had as well as Ali’s relationship with the media. Viewers watching in the east coast were also treated to more tribute coverage after the special report was over as TVNewser points out:

The ABC special report wrapped around 12:41 a.m. A few minutes later, on the East Coast, a special edition of Nightline began.

CBS aired a short special report during the beginning of The Late Show with James Corden. The report was anchored by KCBS’ Paul Magers. CBS Sports Network also interrupted a poker tournament with a report from Adam Schein. An obituary from CBS News’ Scott Pelley aired before returning to poker.

During Fox Sports 1’s late night talk show recapping Copa America, host Fernando Fiore paid tribute to Ali before going to commercial break after showing highlights of USA-Columbia and breaking down the game with his co-hosts.

Vin remembers The Greatest of All Time.https://t.co/nL3UpCQmka

MLB Network also interrupted the regular flow of MLB Tonight to break the news of Ali’s passing. MLB’s online outlet 120 Sports, co-owned by Sports Illustrated, NHL and PGA, aired a tribute to Ali during their telecast which was on air when the news first hit the wires.

AXS TV’s Inside MMA airs every Friday at 12:30 a.m. and began their show as the news was just breaking. Host Mauro Ranallo is a boxing aficionado who calls matches for Showtime and brought special insight to the story.

Snapchat has even dedicated a live story on its app to The Greatest.

The biggest shock in terms of coverage came from the NFL Network. Former SportsCenter anchor Steve Weissman anchored wall-to-wall coverage from NFL Network’s Los Angeles newsroom and was joined via telephone by Marshall Faulk, who once met Ali, and Mark Kriegel, who covers boxing for Showtime in addition to his work at NFL.com. Clips from the NFL Films vault of Jim Brown, Marcus Allen and Richard Sherman paying tribute to the boxing icon were also aired. The network stayed on air for three hours and replayed their breaking news coverage overnight and into the morning.

The night’s most impressive coverage by far came from the Worldwide Leader. SportsCenter’s LA anchors Neil Everett and Stan Verrett broke the news and aired a pre-taped obituary from ESPN’s Jeremy Schaap. After the obituary aired, SportsCenter proved its clout by setting up various units of coverage. Schaap was joined by Scott Van Pelt to recall funny stories of Ali’s past that Schaap knew from prior research or from his father, John Anderson took over the anchor desk to facilitate updates from reporters stationed at the Phoenix hospital Ali died at and Ali’s hometown of Louisville, Everett and Verrett were joined by Steve Levy in LA and all three introduced taped pieces on Ali along with social media tributes.

Bob Ley, ESPN’s standard bearer of journalism, joined his colleagues at the anchor desk around 1 a.m. and interviewed Stephen A. Smith and Michael Wilbon, both of whom are in California to cover the NBA Finals. Ley also conducted interviews with Teddy Atlas, Larry Merchant and other ESPN contributors who were privy to Ali’s legacy. ESPN was live from the moment news broke until 4 a.m. without any commercial interruption and provided a depth of knowledge and history that only a network of their stature could do. In an era when some question SportsCenter’s worth and value, last night’s breaking news coverage proved the legendary show still has a place in today’s world.

Last night’s tribute to Ali also separated ESPN from the rest of the sports television pack (FS1, NBCSN, CBSSN etc.)  until further notice. The amount of resources and tools ESPN had at their disposal to move their coverage along is something the other networks are nowhere near attaining.

NBC Sports Network was the biggest disappointment of the night. The network failed to utter even a mention of Ali’s tragic passing throughout the night. NBCSN had the option of simulcasting MSNBC or could’ve displayed a text update on its bottom line but chose to do neither. With FS1’s recent cuts in the news department, it is unknown if the network would’ve even discussed Ali’s death on-air if they didn’t just happen to be live with Copa America coverage. Instead of carrying coverage throughout the night as ESPN did live for 4 hours straight, FS1 decided to air TMZ Sports and NHRA Racing. Ali’s death is a cultural moment that you just can’t miss if you’re a fledgling network trying to prove you’re the typical sports fan’s best destination for all things sports. Any ounce of credibility you’re trying to obtain over ESPN is lost when common sense isn’t common among the decision-makers at Fox and NBCSN.

Here is a list of some of the special programming airing in Ali’s honor throughout the weekend: