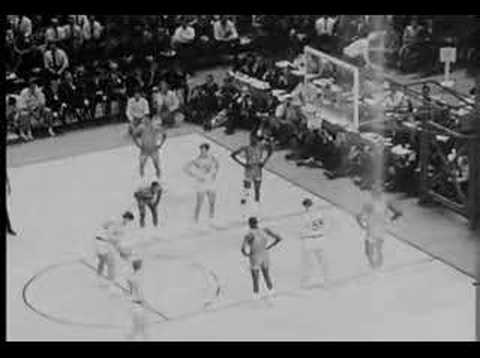 The 1966 NCAA Championship Game is one of the most historic and meaningful single games in the history of sports.  In that game, an all-black starting five from Texas Western defeated an all-white starting five from Kentucky.  It wasn’t until after Texas Western’s victory that the SEC welcomed their first black player onto a basketball court in 1967.  The victory is maybe the most significant in the entire history of college basketball and changed the game forever.

Fifty years later in 2016, sports fans will finally be able to see the game in its entirety.  The New York Times reports that ESPN will re-air the famous championship game this Wednesday at 7:30 PM ET:

That game has rarely if ever been seen on television since its original broadcast on March 19, 1966, and eventually the rights to the tournament were acquired by NBC, CBS and now the partnership of CBS and Turner Sports. Rebroadcasts of classic games are standard procedure these days; ESPN Classic was specifically created (originally as the Classic Sports Network) for that purpose. On the YES Network, classic games are defined as only those the Yankees won, and continue to win, over and over.

But not every classic has a level of historical significance like Texas Western’s. (The college is now known as the University of Texas at El Paso.)

Now, fortunately, it will be seen again on Wednesday at 7:30 p.m. Eastern on ESPN. How it looks will not be a surprise to those who have seen some clips online: The original black-and-white broadcast is a little bleached out. But it is intact.

“This is clearly a seminal event in the history of college basketball, and American sport, in terms of integration,” said John Wildhack, an executive vice president of ESPN, speaking about the original game. “But it was under the radar. I brought it up to everybody and asked if there was a copy of the game anywhere.”

The Times also reports that John Saunders, Jay Bilas, and Michael Wilbon will present the historical re-airing.  However, they will thankfully not be talking over the original game broadcast as NFL Network did for the historic re-airing of Super Bowl I, which was a disaster.

Perhaps some of you might fondly remember ESPN Classic, which used to routinely show important games from yesteryear to a national audience and feature original programming as well.  Several years ago, the channel was replaced by ESPNU on most platforms and eventually shifted to an on-demand service with Dish.

This airing of the Kentucky-Texas Western ’66 title game is a great resurrection of the spirit of ESPN Classic.  And even if the channel never comes back nationally in its entirety, it would be encouraging to see ESPN do special broadcasts like this taking a fresh look at some of the most significant sporting events in history.

This is a game that you may have heard and seen and read so much about, even in cinematic form thanks to Glory Road.  Now ESPN will show the real thing to an audience where many will be able to witness it as it happened fifty years ago for the first time.  Set your DVRs.