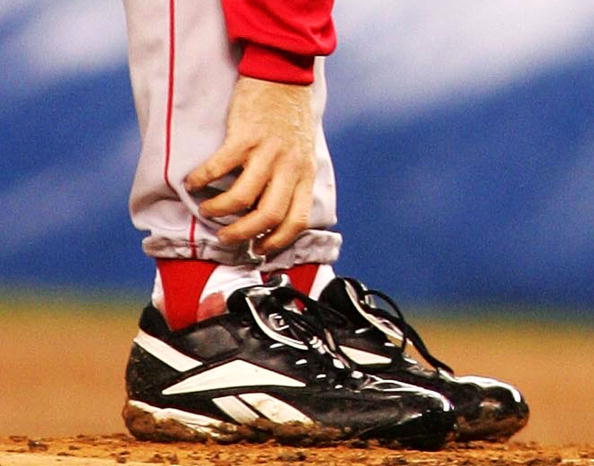 It’s aired on ESPN and ESPN Classic numerous times. Boston Red Sox fans love rewatching the 30 for 30 documentary “Four Days in October” chronicling the historic four game comeback against the New York Yankees after being down 0-3 in the 2004 American League Championship Series. Interesting looking back now, it has two former ESPN employees in the film, Bill Simmons and Curt Schilling.

The 30 for 30 aired Sunday afternoon on ESPN2 in anticipation of the Yankees-Red Sox game on Sunday Night Baseball on ESPN. But a funny thing happened during the re-air. One particular segment was missing and it was Game 6 of the ALCS which was a pivotal game in the Red Sox comeback. That was the game where then-Red Sox hurler Curt Schilling pitched wearing a bloody sock in the wake of having surgery to correct a sprained ankle earlier in the 2004 postseason.

In the wake of his recent firing from ESPN, it certainly looked like more than a coincidence in the eyes of Red Sox and other sharp-eyed fans:

Watched the 30 for 30 on the 2004 sox tonight… Curiously the game 6 schilling game was completely skipped??? Weird move by ESPN

Bad look for @espn cutting out Schilling Gm 6 from 30 for 30 today. Took the high road in aftermath of firing only to take low road today?

This all caught Schilling’s attention and of course, he responded on Twitter:

Wow, full one year complete fabrication to defame greatest QB, now omitting about 4 hours of a game I think I played in. Hmm #integritymuch?

For sale, never used, rarely worn ring from player who didn't actually have anything to do with getting it. pic.twitter.com/6qWxO3uRDN

But ESPN had a simple explanation for it all. It said the Arizona-Oregon softball game which aired before “Four Days in October” ran long so one segment had to be edited out of the documentary in order for ESPN2 to hit its next program on time. An ESPN spokesman issued the following statement:

“When a live event runs long, it’s standard procedure to shorten a taped program that follows. In this case, we needed to edit out one of the film’s four segments to account for the extra length of the softball game.”

And that explanation did not sit well with the fans either:

@fangsbites why do i not buy this. i think i should buy it as legit but i don't

@fangsbites @fangsbites That response is so unbelievable that it is insulting. Talk about misunderstanding & disrespecting their audience!

But Paulsen at Sports Media Watch who does not have a dog in this fight probably had the most level-headed thoughts:

Considering the low stakes (a 6-year old rerun on ESPN2 on a Sunday afternoon) chances ESPN had an agenda when cutting doc are nonexistent.

Fans in New England have a genuine mistrust of ESPN due to its reporting of the Deflategate story on the New England Patriots and Tom Brady so this edit, legitimate or not, certainly doesn’t help its standing in the region.