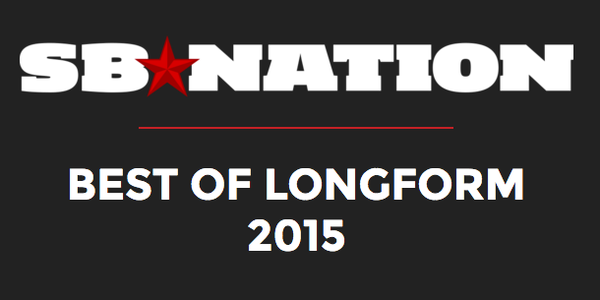 By putting SBNation’s Longform program on hiatus, Vox Media may be falling into the same trap again: letting the scoreboard drive decisions.

Last week, SBNation published a nearly 12,000-word profile of serial rapist Daniel Holtzclaw, as viewed through the lens of his college football career; a tidal wave of criticism prompted SBNation to take it down.

“We’re reviewing all of our processes in light of this failure,” Hall wrote. “I promise to talk in detail about them publicly while we work through all of them.”

Severing ties with Arnold doesn’t mean much; as a freelancer, there aren’t many ties to begin with:

Someone had to accept the pitch, someone had to edit the piece, and someone had to override the “objections by senior editorial staff” Hall mentioned. On Monday morning, Arnold took to Twitter and claimed “at least four editors” signed off on the piece.

What if the problem, as Balk suggested, is longform itself?

Just as we do with athletes, sports media often conflate storytelling effort with artistic achievement. As Burt Helm and Max Chafkin of The Rewrite podcast wrote, no feature under 6,500 words has ever won a coveted National Magazine Award. Why? Because it’s really hard to write a story that long.

Thompson’s “The Losses of Dan Gable” is as good as sportswriting gets. All of those words are there for a reason. It’s as compelling as it is complex, as beautiful as it is honest and satisfying as it is haunting. It’s what happens when gifted writer at the peak of his powers finds a better-than-fiction story and uses the resources of The Worldwide Leader in Sports to tell it.

Publishing a 12,000-word feature is like running a marathon: just finishing is an achievement. But while you probably know someone who’s finished a marathon, and you can probably find someone near you who runs a sub-five-minute mile, only a handful of people on Earth can run a marathon’s worth of sub-five minute miles.

SB Nation’s Longform program has published about 250 pieces since mid-2012, steadily turning out a lot of ambitious work, much of it excellent. But the program doesn’t—can’t—hit Thompsonesque levels of achievement every time.

Several other longform failures have done real harm. Grantland’s “Dr. V’s Magical Putter” is a case study on how get-the-story tunnel vision can blind journalists and editors to grave failures. In that case, the writer’s fact-finding triumph came at the steepest possible cost.

Grantland may be an example of the scoreboard-watching going on right now, as Vox weighs the future of SBNation Longform. All of that reporting and writing and editing and illustrating and publishing isn’t cheap. Given half the stories on the SBN Longform landing page have fewer than 10 comments, it wouldn’t be surprising if these pieces aren’t driving enough engagement to pay for themselves.

These pieces provide value beyond traffic, of course: they’re a halo for the brand. GM took a $10,000 bath on every Pontiac Solstice they built, but the engineering advances used to put the radical roadster in showrooms was invaluable for future products—and all the other Pontiacs looked cooler sitting near it. So it is with longform: As long as the soft benefits of critical praise, social buzz and tech development make up for the lack of traffic, publishers come out ahead.

When a failure like this generates backlash and outrage, though, it tests a company’s commitment to keep reaching for greatness. Vox hasn’t failed that test yet, but they got the first answer wrong.

The problem with “Who is Daniel Holtzclaw?” wasn’t length. It would have been terrible at 1,200 or 120,000 words, because the answer to the question posed by the headline is “A man who used his badge as a license to rape women.”

Blaming this on the format doesn’t make any sense—and in what feels like a response to the longform backlash, writers, editors and readers will all miss out on who-knows-how-many SBNation features that now won’t get written, edited or read.

The job of sports media is to look beyond the box score and bromides to tell the powerful stories unfolding on and off the field of play. Arnold and SBNation spectacularly failed to do this—but rather than take their lumps and go get ’em next time, it seems Vox is taking their ball and going home.

Whenever an outlet does the math and decides creative ambition isn’t worth the risk in money and time, there’s a chilling effect on the entire industry: There are fewer places freelancers can pitch, fewer jobs for editors, fewer stories being told. The longer SBNation’s pipeline of pitching, reporting, writing and editing is closed at the source, the less likely that stream of ambitious work ever flows again.

But just as the death of Grantland resulted in the birth of The Ringer and the rebirth of MTV News, the end of this piece—even a shuttering of SBNation Longform—won’t be the death of feature writing. Even Balk allowed that some stories can only be done justice with the Cadillac treatment, and too many writers and readers are attracted to the power and potential of the medium.

They may just have to go a different URL to get their fix.

Ty Schalter is a part of The Comeback and a member of the Pro Football Writers of America, Ty also works as an NFL columnist for Bleacher Report and VICE Sports, and regular host for Sirius XM’s Bleacher Report Radio. In another life, he was an IT cubicle drone with a pretentious Detroit Lions blog.