While the ratings for the College Football Playoffs were undeniably poor this season, especially considering the momentum the playoffs had going into last year’s event—thankyouverymuch New Year’s Eve games with a 10-day layoff—there is little denying the ESPN Megacast treatment is an amazing use of company resources to cover one game.

For those less interested in the traditional football broadcast with Chris Fowler and Kirk Herbstreit in the booth (full disclosure: the only channel I watched during the game this year), ESPN used every channel in its arsenal to cover the national title game, with ESPN2 employing the “Film Room” with former players and coaches talking about the game as it happens, a critical success for the Worldwide Leader, if not a ratings smash. ESPN also had the “Homer Telecast” on ESPNU, with former players from each teams presumably bickering and trash talking the entire time. (You can read a recap of our Megacast coverage here.)

Paul Finebaum has his own Film Room on the SEC Network this year, while ESPN Classic had the game without any commentators at all. ESPN Goal Line had a camera on everything, using the ESPN Radio broadcast and ESPN Deportes had the game in Spanish, with six additional feeds—from hometown radio to the student sections to the Pylon Cam—on ESPN3 and Watch ESPN. 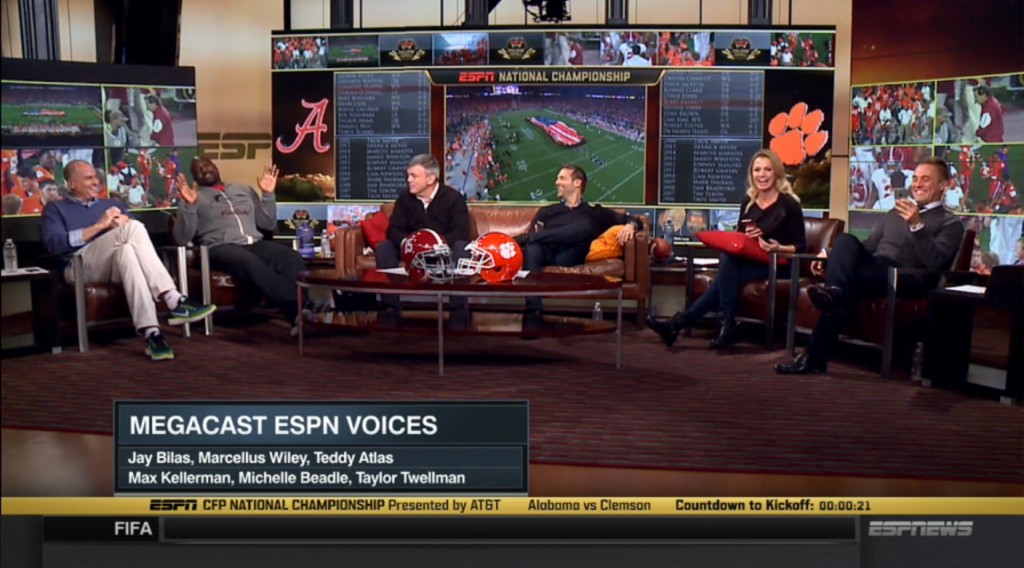 They even had a channel called ESPN Voices, where mostly non-football people sat together on a set and watched the game so you could flip over to watch them watch the game, like talking fish in a tank. As ridiculous as that sounds it’s probably the best use of ESPNEWS in years.

ESPN, in total, employed 15 different feeds for one game. It’s annual overkill to the nth degree, and ESPN does it simply because they can. “We spent seven billion dollars on this, and you are going to watch it everywhere.”

Which begs the question: what else would we watch in a Megacast format? With ESPN properties, it’s less than one might think. 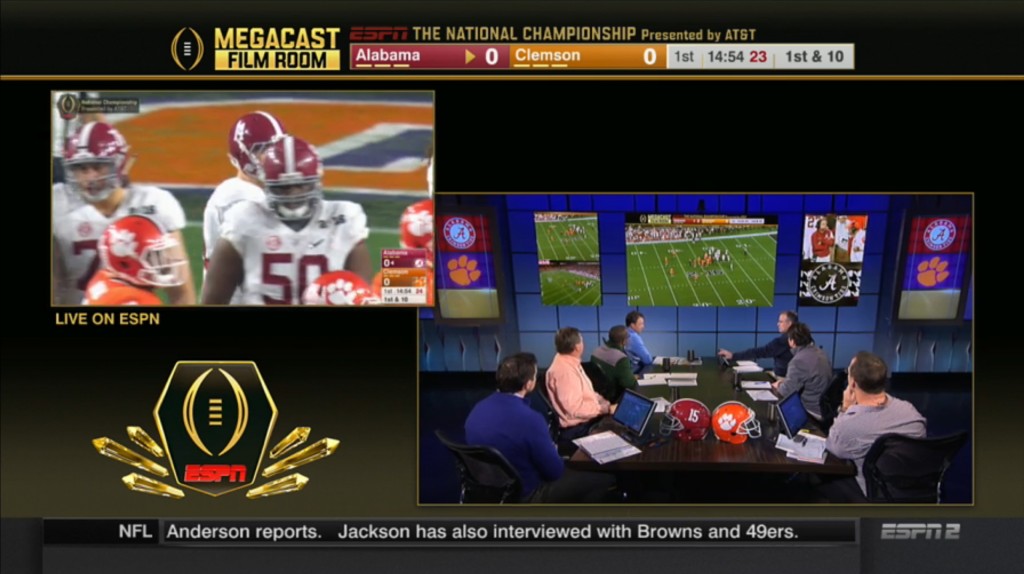 For all the sports rights that ESPN has, they really don’t have too many major events. For all the money they spend on NFL coverage, ESPN gets one playoff game a year, in the first round. The same goes for the MLB playoffs, with the World Series going to Fox and the non-Fox games leading up to the World Series, except the one, on TBS.

For all the college basketball ESPN shows over the season, CBS and Turner have the NCAA Tournament (and, for what it’s worth, do their own “megacast” for the National Championship game.)

After shuttering off most of their major golf coverage, ESPN is mostly left with a ton of regular season games, championship tennis, conference title games in football and basketball and the CFB Playoffs. This was harder than expected, for sure.

And yet, there are still a few events with enough cache and control that ESPN could give the Megacast treatment. Here’s a look at five: 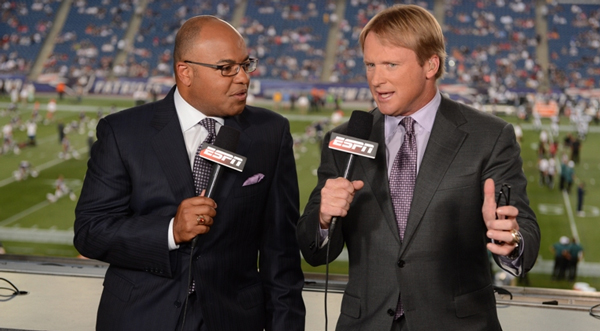 This is the most obvious choice, if the NFL’s broadcast rights would allow it. Similar to the CFP Megacast, ESPN could have Mike Tirico and Jon Gruden in the booth on the mothership, with ESPN2 focusing more on breaking down each play from a coaching perspective. A channel focused on the officiating would probably be the second most-viewed feed, while cameras just on the coaches the entire game would be fascinating as well.

The NFL basically does this already, especially with the Sunday Night feeds online on NBC, but ESPN could do as good a job as anyone, and raise the bar for the other networks as the playoffs advance. 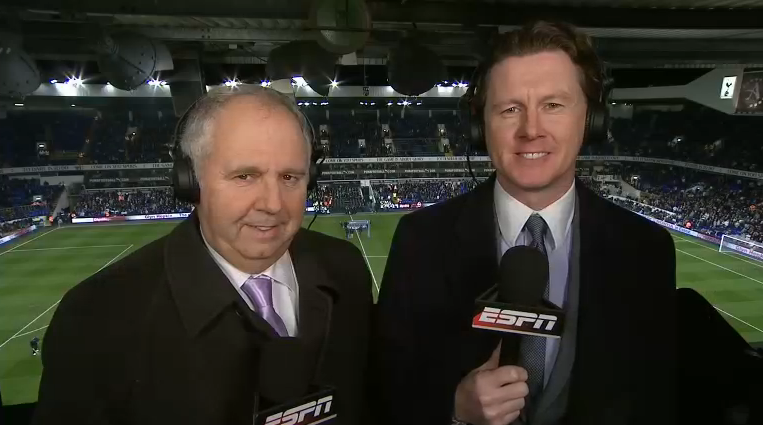 The biggest soccer property ESPN still maintains the rights to has to be the European Championships, which is essentially the World Cup but without all the crappy nations from everywhere in the world outside of South America.

ESPN already thrives with Spanish-language coverage, but what about individual channels just focusing on the star players from each team. If Spain and Germany make the final, let’s say, what about a camera just focused on Thomas Muller or Mesut Ozil or Andres Iniesta, to show how and where they move on the field?

ESPN thought it was a good idea to have a channel dedicated to ESPN personalities watching the national title game and not talking about football? How hilarious would it be to have the NFL and NBA crews team up to watch soccer together?

Actually, how great would it be to have American athletes who are soccer fans in the booth talking about the game, sharing stories of their favorite players, when they grew up playing the game and watching together. You can’t tell me if ESPN got Kobe Bryant or Steve Nash and Andrew Luck, Sammy Watkins or Odell Beckham in a room together to watch the Euros that it wouldn’t be a fun listen.

What about not just a goal line camera, but a goal post camera, showing the game from the vantage point of both keepers? And if you thought the student sections are worthy of a feed in college football, try putting a camera on some of the European fans for 90 minutes. 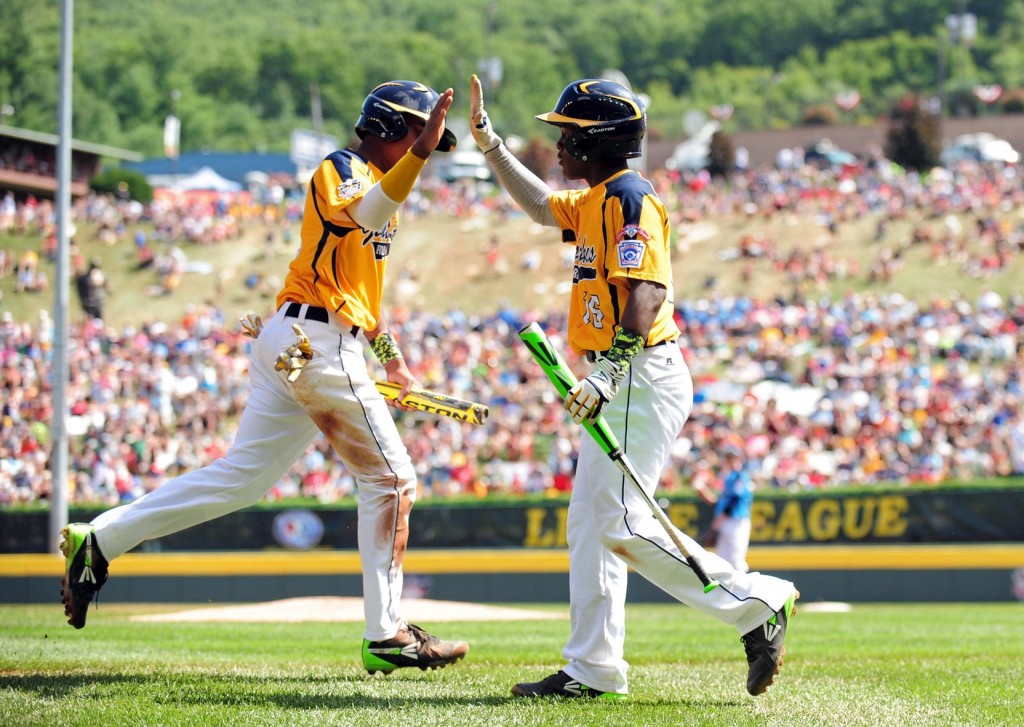 I’m of the camp that there are far too many games on television for ESPN to be considered anything but exploitative with its LLWS coverage, especially given the size of the television contract and how much goes to the actual organizations that make up the event. Having said that, it’s perfect for the Megacast.

One channel with the game, one with the opponent’s native-language audio, one with current MLB players who played in the LLWS talking about the game and sharing stories about their time playing, an “ump cam” where we see the game from the vantage point of the home plate umpire, a “ping-free feed” where we get to watch the game without the hideous ping of the metal bats the entire time and multiple feeds showing the moms and dads of the pitchers and, when at the plate, each batter.

Truly, I would watch a camera just on the parents more than I’d watch a bunch of kids playing baseball. You would too.

The lone major championship left on ESPN’s schedule given the early hand-off of the British Open to NBC this season is the Masters. Sort of.

ESPN only has the first two days of the Masters, and golf has been doing Megacasts online for nearly a decade with the Masters coverage leading the way, so simply taking those feeds and putting them on television would be the easiest thing ESPN could do all year. It’s amazing it hasn’t happened yet, putting two featured groups and the Amen Corner feeds on more than just the online stream.

ESPN could add in their own channels too, with legends of the game sitting in and talking over the traditional coverage and a camera on Tiger Woods or Jordan Spieth from the moment they wake up until their final putt drops. Let’s see a day in the life of a champion. Surely some player would say yes.

Of all sports, basketball lends itself most to the megacast treatment. To some extent the NBA already does a lot of this, again with most of it online, but ESPN could expand the concept to all their TV stations for Game 1 of the NBA Finals.

ESPN gets the main feed. ESPN2 gets legends of the game and current players who didn’t make the Finals talking about those who did. ESPNEWS gets a camera on the home team’s best player the ENTIRE game, even on the bench, while ESPN Classic does the same for the road team.

ESPNU could bring in the top players’ college, high school or AAU coaches for a roundtable discussion about the state of the game and just how damn good those guys were when they were kids. Which, to be fair for some of them, was like two years ago.

And, assuming the Warriors make the Finals, they could have a channel just on Steph Curry’s family. They pretty much do that already anyway.