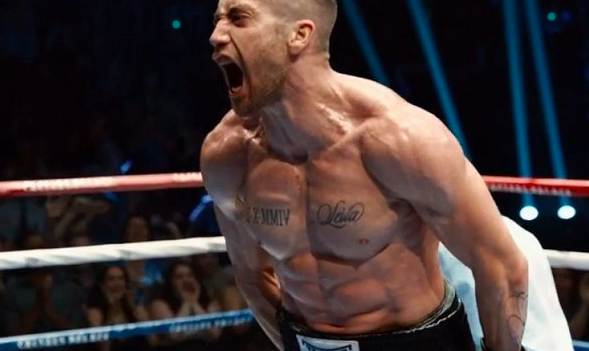 Ed Note: Our Ian Casselberry reviews the latest movies that hit theaters over at The AP Party including ones with sports tie-ins.  Does Southpaw have what it takes to be a classic sports movie or is it a swing and a miss?

Southpaw got a lot of advance buzz due to pictures of Jake Gyllenhaal’s phenomenal condition hitting the Internet. But as impressive as the star’s monster abs are, a whole movie can’t be built around them.

Or maybe it can. At times, it sort of felt like director Antoine Fuqua was indeed emphasizing the spectacular shape Gyllenhaal got in for his role as light heavyweight champion Billy Hope. Not that he should necessarily be faulted for that. If I was a director, and my star chiseled his body like that for my movie, I’d put it on screen as much as possible too. Obviously, that also applies to Gyllenhaal, who will surely show off his physique to his future grandchildren.

Boxing movies have quite an uphill battle, as they’re destined to be compared to the Rocky series or Raging Bull. (And very few are going to look good against the measuring stick of Martin Scorsese and Robert De Niro.) But boxing tends to be the most cinematic of sports, with the one-on-one nature of the contest and the natural narrative it creates. Some directors might try creative angles in an attempt to stand out or show something different. (Michael Mann’s work in Ali is something that comes to mind.)

Ultimately, the characters and the backstory are what will make a movie compelling and draw in wider audiences. Unfortunately, that’s where Southpaw falls short and will prevent it from being remembered for anything more than Gyllenhaal’s abs or Eminem’s soundtrack.

Let’s begin with the main character being a white boxer with the last name “Hope.” That’s just a little too on-the-nose, isn’t it? It’s difficult to prevent your eyes rolling after hearing that and thinking about it for a second. Had there been some explanation that Gyllenhaal’s character had changed his name to suit a ring persona, that could have been interesting. Maybe it would have provided some insight into a boxer who was raised in the foster care system and emerged from that to become a champion who lived an opulent lifestyle. He saw himself as “hope” or needed to believe that, so he took on that name. 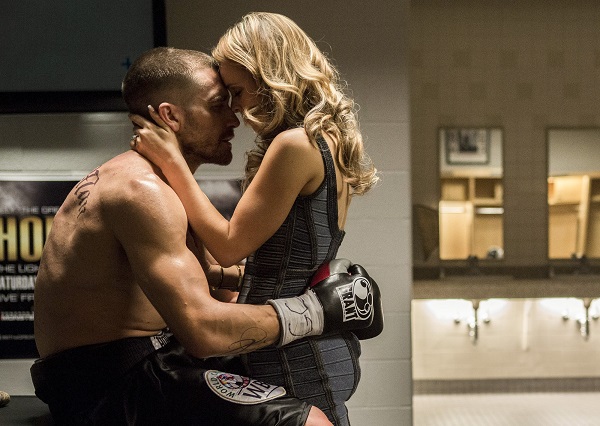 If there was anything like that in Kurt Sutter’s script, however, either he cut it out or Fuqua did during the filmmaking process. I realize it’s probably unfair to write more about what I wish was in a film, rather than what the final product actually presents to the viewer. But while watching Southpaw, I kept thinking about the movie I wish it had been, directions the story could have taken, character notes the script could have explored, instead of the overly melodramatic choices Sutter and Fuqua made.

As just one example, Hope’s manager (played by 50 Cent) and trainer end up going to a younger fighter, Miguel Escobar (Miguel Gomez), with a brighter future, one that Hope eventually fights at the end of the movie. Yet the movie pretty much glosses over what would be a huge deal in boxing circles. And even if you weren’t looking at this in boxing terms, what about the dramatic elements that could be mined from the manager and trainer using what they know as they prepare for the match?

There could have been some intriguing interplay between Hope’s former crew training Escobar and Hope facing what his old mates know about him and can use against him. That could almost be an entire movie, yet it’s barely a line in this film, with Escobar screaming during the match that his trainer should be able to tell him how to beat Hope. What a missed opportunity. If that story’s been told before on screen, I certainly haven’t seen it and would have loved to here.

Another angle Southpaw could have taken was using Hope’s wife, Maureen (Rachel McAdams) as something more than a dramatic plot point. Maureen’s death under tragic circumstances is what puts the story in motion, sending Hope into a downward spiral that causes him to lose his career, his belongings and, most importantly, his daughter. While I get that the idea was to show a man pick himself back up after losing his partner and anchor in life, I kept wondering if it would have been more compelling to see Maureen lead her husband’s career, to be the force that pushes him to the top. We’re told that’s the case throughout the movie, but I would have preferred to see it — even if that would have made for an entirely different story. 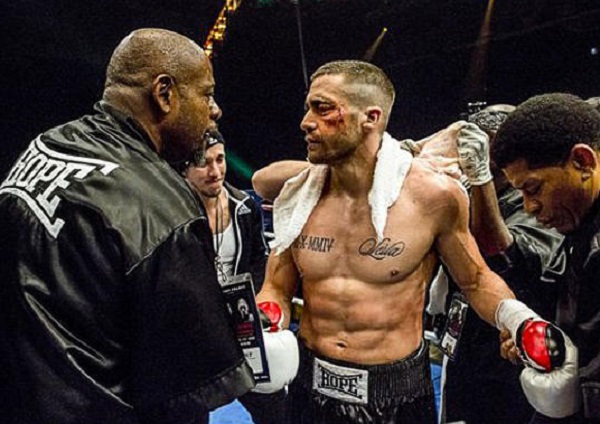 I suppose I just wanted more of a boxing movie. After Hope has lost everything, he tries to pull himself up from rock bottom by going to a rundown gym run by Tick Wills (Forest Whitaker), whom he remembers as training the one fighter that should have beaten him in the ring (but didn’t because of politics or shady dealings). And if you’re not sure Hope has hit rock bottom, Fuqua hits us over the head with that idea by showing Hope at the bottom of a long staircase leading up to Wills’ gym.

As you might expect, Wills initially refuses to train Hope, not wanting to deal with a professional fighter’s ego and perhaps more dedicated to giving young fighters from broken homes and tough backgrounds a way out. Of course, Wills eventually relents once he sees how willing Hope is to work just like any other up-and-coming fighter, to do what’s necessary to show he can hold a steady job and be a suitable parent. Otherwise, we wouldn’t really have a movie, right?

But yet again, it felt like Sutter and Fuqua missed an opportunity by not really exploring the training process between Wills and Hope. The script gives us hints that Hope was largely a brawler who used his anger to give him the extra push he needed in the ring. Wills tries to get him to let go of that, to become more of a defensive fighter than an aggressor. Maybe the movie gives us enough of that idea, showing Hope ducking and weaving underneath ropes, rather than concentrate on punching.

However, I wanted more of Wills breaking Hope down and trying to rebuild him as a different fighter. Go back to his old fights and show examples of where he almost lost, including the bout in which Hope faced one of Wills’ boxers. Maybe have Hope admit that he nearly lost the match we see at the beginning of the story, acknowledge his wife’s fears that he was on his way to becoming punch-drunk, that his way is no longer working. Again, I haven’t seen that movie before.

I understand that I’m probably living in a dream world here. A pure boxing movie likely isn’t going to appeal to the masses. Contrived melodrama, romance and “Don’t take away my daughter!” subplots draw in a wider audience that otherwise might not be interested in a sports film. Yet I’d like to think that depicting someone who succeeded one way — perhaps through emotion and hubris — and has to adopt a new humble, more thoughtful approach to keep what he has, to get back to the top might make for a really good movie — not just a sports movie — that most everyone could relate to.

I would have really enjoyed that movie. Gyllenhaal’s performance deserved a better movie too. Southpaw just isn’t it, and really isn’t even close.