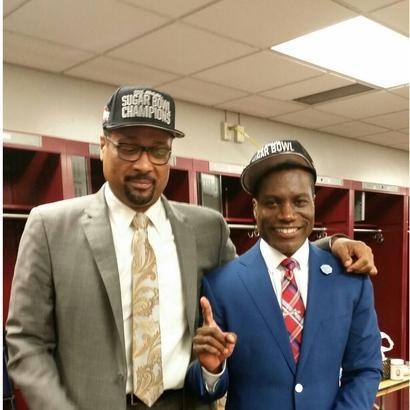 The Big Ten has been a punching bag for the national media for the better part of the last decade, and deservedly so.  The conference barely sniffed the national championship hunt after Ohio State’s failures on the big stage in 2006 and 2007.  The conference suffered loss after loss in important bowl games.  Former national powers like Michigan have been eroding.  And Penn State hit rock bottom after maybe the worst scandal in the history of the sport.

In recent years though, there have been signs that the Big Ten had been turning it around.  Ohio State defeated Oregon and Arkansas in BCS games.  Mark Dantonio turned Michigan State into a Top 10 program.  However, the prevailing narratives were still dominant.  Entering the 2014 season the national media was still down on the Big Ten as a whole and their hopes to contend in the playoff era.  The narratives of changing demographics and the SEC’s dominance and the Big Ten’s fall were too strong to overcome.  And with the conference’s only real contender Ohio State suffering the loss of Braxton Miller before the season, there was seemingly little hope.  That became “no hope” in early September when Ohio State lost at home to Virginia Tech and the conference suffered several bad losses.

Thankfully, that’s why games are decided on the field and not by sportswriters.  Hindsight is always 20/20, but it’s amazing to look at how the Buckeyes and the Big Ten were not just doubted at nearly every step of the way this season, but buried by the national media.  From before the season to before the title game, here are some of the boldest proclamations about the death of the Big Ten and Ohio State that were slightly exaggerated…

“He could coach a lingerie football team to the Big Ten championship game.” – Paul Finebaum on Nick Saban

“Tuesday’s news that Ohio State quarterback Braxton Miller will miss the upcoming season with an injury to his right (throwing) shoulder seriously deflates the Buckeyes’ hopes of making the inaugural four-team College Football Playoff. Their national championship aspirations seem all but over — 11 days before they’ll open the season against Navy in Baltimore on Aug. 30.  Miller’s injury also puts a serious dent in the Big Ten’s chances of having a representative in the playoff. Miller, the two-time reigning Big Ten Player of the Year, was a preseason Heisman Trophy favorite and one of the country’s top returning quarterbacks.” – Mark Schlabach

After the Virginia Tech game

The Big Ten is officially eliminated from placing a team in the playoff. It is September 6th.

“Ohio State’s J.T. Barrett is flat out awful. Did you see his arm punt interceptions on Saturday night? Credit to Virginia Tech for the road win, but Ohio State looked like a team that could go 8-4 or 7-5 this year. Put it this way, what would the Buckeyes finish in the SEC West this year? Who are they beating with Barrett at quarterback? Maybe Arkansas? And I’m not even sure about that win. Especially not if Ohio State had to go on the road.” – Clay Travis

“There is no easy way to put this—even for a Midwesterner who has defended the Big Ten from the tired narratives that have dogged the conference—so let’s just call Saturday exactly it what it was. This was a catastrophic day for Jim Delany’s baby, a 13-hour stretch that could seemingly crush the Big Ten’s College Football Playoff hopes while furthering the national criticism that has grown louder in recent years.” – The Death of the Big Ten, Adam Kramer

After J.T. Barrett’s injury and the Michigan game

“When you’re looking at this team without their star quarterback, their playmaker on offense will be out, you can’t put them in the top four.  They’re not worthy…  They’re not one of the four best teams in the country because they’re missing their best player.” – Mark May

After the Big Ten Championship

Some strong words by Jesse Palmer, who thinks Baylor should've been the No. 4 seed:

“Oklahoma State would have won the Big Ten West."

"The Big Ten is overrated and doesn't deserve to be in the playoff" -Jesse Palmer, ESPN 12/7/2014. #CFBChampionship pic.twitter.com/UsKpwUzabB

* Pat Forde of Yahoo Sports picked the Big Ten to go 0-10 in bowl season.  0-10.  Winless.  At the time the conference was an underdog in every one of their games.  Even then though, by pure statistical probability, you would expect at least one of those teams to win… right?  Maybe even two.  The B1G did better than that, going 6-5 including three huge New Year’s Day victories, and winning the National Championship.

"If I am Alabama, I am very happy about getting the draw of Ohio State." – @davidpollack47

After the Sugar Bowl

“Let’s just see what happens when the talent leaves in two years.  Let’s see if he dominates the Big Ten.  He may.  And let’s see if he dominates college football.  And he may.  And if he does, more power to him…  Granted Top 25 was an exaggeration, he’s obviously a good coach, hey sometimes you put your foot in your mouth.  Top 25 was an exaggeration… In my book, if you’re a top coach, let me see what you can do with a program that’s fallen on hard times.  He’s not had that experience, so when these guys graduate in two years, everyone he inherited, I’ll see how he does.” – Danny Sheridan on Urban Meyer, January 8, 2015

To add some further context to these remarks from USA Today’s Danny Sheridan, he had said in August of 2013 that Meyer was not a Top 25 coach in college football.  That’s right, two-time national champion Urban Meyer behind the likes of Gary Pinkel and Jim Mora Jr. and who knows who else.  Sheridan’s original comments are here, because they’re truly that astounding:

“He left that Florida program in ruins.  You can say he won two national championships, that’s correct.  One with Ron Zook’s guys and the other with Tim Tebow…  He’s very fortunate.  But the best?  He’s not even in the Top 50.  I shouldn’t say 50, Top 25…  Not according to what his peers have told me and not according to what I’ve observed at every stop he’s been including Florida.  That program was left in ruins and I could go on and on… if you’re talking Top 25 coaches, there’s no way in hell he’s in the Top 25.”

Even after defeating Alabama, Sheridan took a “wait and see” approach with Urban Meyer being a top coach in college football.  Remarkable.  But it’s appropriate to end this journey not with more words about the death of the Big Ten and Ohio State having no hope at every step of the way throughout the season.  We end it with a lack of words from Mark May on the eve of the National Championship Game when asked if Ohio State was worthy of taking the same field as Oregon.  One now wonders if the likes of Mark May have been silenced about the death of the Big Ten for a long while..