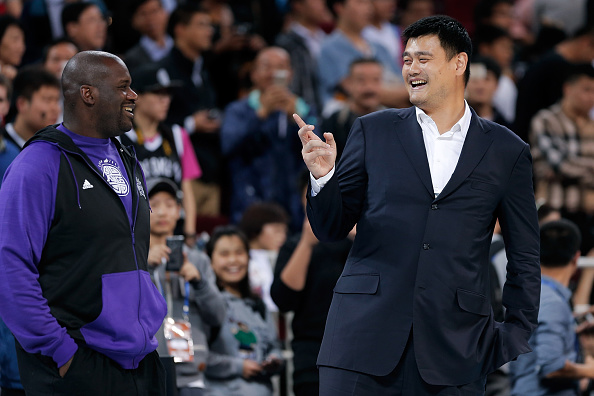 Television rights deals have become one of the main sources of income for professional sports leagues over the years.  It’s a multi-million dollar business, and often times, multi-billion dollar business for the biggest leagues.  But when it comes to revenue from television deals, we usually just focus on what professional sports earn in America.  There’s a bounty of money to be made from overseas rights deals, though, and the NBA just hit the jackpot in the most populous country in the world.

The NBA’s popularity in China is truthfully one of the most under-appreciated success stories in the sports business world.  The league makes over $5 billion in revenue globally and China is the centerpiece.  Now the association is about to expand their business in Asia even further.

The NBA announced a massive rights deal with Chinese online service Tencent.  Although NBA games are televised on state television in China and the league makes some revenue from that deal, Tencent will provide streaming digital rights throughout the season.  The deal includes games from the entire NBA season – from Summer League to The Finals.  In addition, Tencent will make NBA League Pass available for China for the first time:

The National Basketball Association (NBA) and Tencent Holdings Limited (“Tencent”, HKSE: 0700), a leading provider of comprehensive Internet services in China, today announced a five-year expansion of their partnership that will create the league’s largest international digital partnership. The new partnership will be effective on July 1, 2015.

As the Exclusive Official Digital Partner of the NBA in China, Tencent will feature a record number of live NBA games and deliver enhanced original NBA programming and highlights, including NBA preseason and regular-season games, NBA All-Star, the NBA Playoffs, The Finals, NBA Summer League and the NBA Draft through personal computers system and mobile devices. NBA live games and content will be available for fans to access through Tencent’s NBA sections on QQ.com, v.QQ.com, QQ and Mobile QQ, Qzone, Weixin, Tencent Video app, and Tencent News app.

Tencent and the NBA will launch the first-ever NBA LEAGUE PASS offering in China, providing fans with access to a full season of live and on-demand NBA games online and via mobile devices.

“The NBA represents both a widely-followed sport and an active healthy way of life in China,” said Martin Lau, President of Tencent. “This multi-year agreement enables us to bring substantially more NBA games and content to consumers than has ever been available in the past, and we look forward to working with the NBA league, teams and players to further enhance the sport’s profile and popularity.”

“NBA fans in China are among the most passionate and knowledgeable basketball fans in the world, and we are thrilled to expand our partnership with Tencent,” said NBA Commissioner Adam Silver. “Tencent is one of the most innovative, leading brands in China, and their extensive reach will give our fans unparalleled access to the league and its teams.”

This is a massive, ground-breaking deal for the NBA.  And perhaps the most eye-opening part is the pricetag.  The NBA is reportedly set to bring in $700 million over 5 years from the new rights deal.

NBA's brand new deal with TENCENT as digital partner in China is projected to be worth $700 MILLION to the league over 5 years.

These numbers explain why league commissioners like Adam Silver and Roger Goodell are looking overseas to expand and grow their respective games.  The potential for increased revenue is largely untapped and enormous.  We can see the roles reversed with the Premier League’s growth stateside over the last several years and the push to play a 39th league game overseas.  And although fans may not see the need to play games in Beijing and London, or for the Premier League to go abroad, it’s always about expanding the bottom line.  Over the next decades, and especially with the success of this deal, expect global expansion to become even more of a major storyline in all of sports.