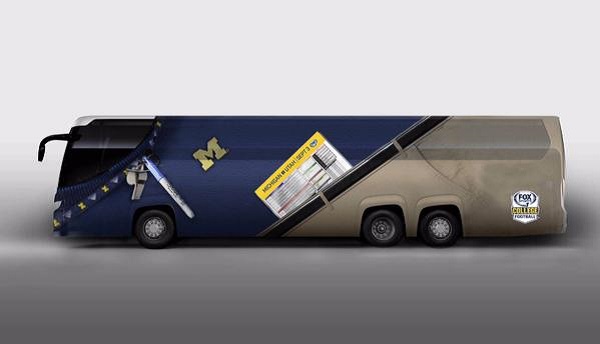 College football returns tonight and with quite a delicious and large portioned appetizer with Utah hosting Michigan.  Neither team is in the top 25, so if you were to go to a standard CFB scoreboard (which usually by default shows games only with top 25 teams), you’d see Alcorn State vs. Georgia Tech listed as well as Arizona hosting Texas San Antonio (both total snoozers) but not Michigan vs. Utah.

But you know Utah is playing Michigan. Or maybe you just know Michigan is playing someone because FOX marketing and promotional have throttled up their efforts solely focused on Michigan to a level that probably make DraftKings and FanDuel executives jealous. Whether you think it’s cheeky, annoying, shrewd, or just overkill, the reality is it that this blitz of promotion has potential to be a monumental turning point in FS1’s quest to at least get ESPN in their sights. It’s no secret that the Big Ten is one of the last big rights deals up for grabs in the near future and FS1 needs more high-profile live rights. Of course it’d make sense that they would go after the Big Ten hard.

Before getting into why FOX is basically offering to give the Big Ten an “amazing” foot massage when the Big Ten already has a boyfriend that’s in the next room, let’s look at some of this wooing to the conference under the guise of promoting a football game.

– There is the Harbaugh Khaki Bus above roaming the country making promotional appearances at various FOX events, studios, and sporting events. That’s real fabric on the bus which took 211 hours to apply to the bus. 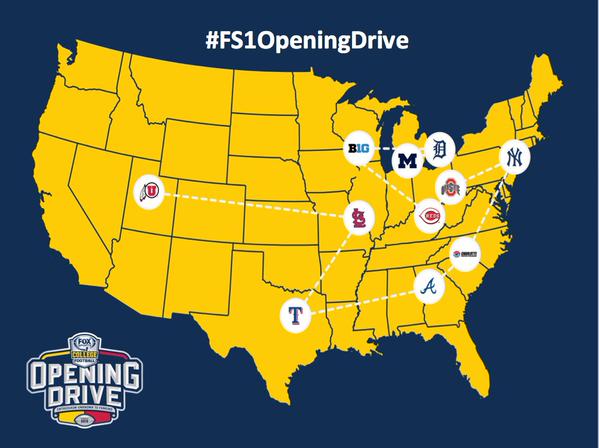 – In the bus are the “Harbros” pictured below who are quite helpful in turning heads wherever the bus goes. I implore you to check out their Twitter page because they’ve done way more shit in the past two weeks then you probably did this whole summer. Eddie Maisonet has done a great job chronicling the journey/providing adult supervision for Cleatus and the bros.

– Fox Sports Go will have 5 different feeds of tonight’s game including the ‘Khaki cam’, a continuous feed looking at Jim Harbaugh. Kind of creepy right? (Yes, but look how much attention this is getting by googling ‘khaki cam.’)

– Colin Cowherd makes his anticipated debut for Fox on location for the game.

Whether it’s been a bit much or just cashing in on the strong interest in Harbaugh’s resurfacing in trying to resurrect a downtrodden Michigan program, the reality is that it’s worked. The ratings will be very impressive and the Harbus tour has been a smashing success as they’ve been on countless Fox channels, shows, events, been highly visible on social as well as online, and even fooled the likes of MLB, SI, and USA Today as the Harbros appearance at a baseball game coupled with a complicit FS1 announcing team led to a viral piece of content.

But here is the thing. This game on FS1, because FS1/FOX splits the Pac 12 rights with ESPN. So because this game is at Utah and by chance Michigan is coming to town for Harbaugh’s first game, Fox and FS1 get to push all in on promoting Harbaugh and Michigan and by extension elevating the buzz around Big Ten, a conference that currently has a nearly a comprehensive relationship with ESPN that absorbs almost all the big time conference events with the Big Ten Network taking mostly leftovers and CBS taking a handful of basketball games a month. (Aside from the fact that Fox owns part of BTN, Fox television’s only real piece of the Big Ten is the football championship game which they’ve aired since its inception.)

Utah and the Pac 12 are really getting no love in this run-up to tonight’s game. They’re favored! They’re at home! They’re supposed to be featured right? The Pac 12 in general has rumored to be lukewarm on Fox thus far as a television partner and I imagine the obsession with Michigan and Harbaugh isn’t doing much to bolster that relationship.

But what it is doing is giving the Big Ten something to think about. Somewhat of an impromptu tryout of how Fox and FS1 differ from ESPN. ESPN is not going to spend 200+ hours putting fabric on a bus. ESPN is not going to have a team specific/personality specific designed bus roaming the country and they’re not going to find interns that kind of look like Jim Harbaugh to put on that bus. ESPN probably wouldn’t parachute Colin Cowherd in a splashy debut after a hiatus away from the airwaves. ESPN wouldn’t make one regular season game and one promotional campaign bleed into so many other channels, platforms, shows, and digital and social campaigns. ESPN is quite adept at promotions and marketing, but they just would not take one regular season game and push it to this extent. Neither would CBS or NBC. But that’s the famous Fox bravado. They can do things other networks wouldn’t dare even consider (although with a lot of mixed results).The more marketing Fox and FS1 does, the less the Big Ten has to spin wheels trying to get attention.

But why such an overt effort by Fox/FS1?

Up until now FOX and FS1’s talk of being in the same punching class as ESPN has been largely considered a pipe dream as many have pointed out ESPN2 often bests FS1 by a large margin ratings wise. If FS1 is going to get closer to ESPN in size rather than ESPN2 in this decade, it’s going to take a big boost of live rights and with all of the big ticket items off the table for the next handful of years minus the Big Ten and a sliver of Thursday Night football games, the clock is ticking for FS1 to achieve the relevance they hope achieve in the sports world.

Should Fox and FS1 miss out on the Big Ten and or Thursday Night Football (which the NFL goes back and forth on their plans on frequently) FS1 would be likely looking at a decade of slow incremental growth, a lot of which would come in the face of an era where we’ll continue to see the amount of cord cutters increase. In other words, it would be a slog. A long slog. An uphill one on a hot day heading right towards the sun with no shade and with no water. This doesn’t necessarily sound like the FUN FUN FUN the network was touting heavily early on.

But Big Ten television rights would make a HUGE difference. Not just the obvious boost on fall Saturdays but the basketball rights where the conference frequently brings in the highest rated college games of the year, which run during a lull in the sports calendar for FOX and FS1. (Let’s not get started on the numbers the Big East pulls in for FS1.) Many expansion theorists also believe Kansas and Oklahoma are possible candidates to join the conference down the road which is another data point in me saying if you wanted to build a sports television network around one deal, the programming shelf space the Big Ten takes up between football and basketball and the growing geographical footprint (Nebraska, Maryland, and NY/NJ recently added) might make the conference the ideal one to build around. The fact that ESPN and CBS have secured the SEC and the NBA is off the table along with the fact that FOX owns about half of the Big Ten Network only solidifies that this is the poker hand you put all your chips in and hope the river goes your way.

ESPN, facing a bevy of scrutiny given the momentum of cord-cutting apocalypse predictions, is rumored to be steadfast in maintaining their relationship with the conference. It’s just too large of a piece of a pie to give up. That’s where things get interesting. If you polled the most savvy sports media analysts, I think they’d tell you there was a 25% chance ESPN holds onto the package they have now. The conventional wisdom FOX/FS1 has about a 10% chance to take the bulky package ESPN holds now. Most believe we’re looking at likely FOX/ESPN split similar to what the Big 12 and the Pac 12 have now. There is a slim 1% chance or so you could see CBS or NBC do something bold, but I think that’s more wishful thinking for those who don’t fancy Fox or ESPN as options.

Proud to welcome the @FOXSports1 bus to BTN this morning. That's a good looking bus, isn't it? #FS1OpeningDrive http://t.co/2ilwjnH2nV

So the reality is the Big Ten is likely to have its cake and eat it too. In the past, it was rounds of golf, steak dinners, and drinks to try to warm up someone to the idea of doing business with you. FOX has instead opted to equip a bus with khakis, a clipboard, and a sharpie, and have a torrid pace of promotion along with a Jim Harbaugh stalker cam. It’s brilliant because just it’s under the charade of promoting a game much like that person lingering around your significant other at work being a good and fun “friend” when you know what he/she is really eying. FOX is sooooo Jim Halpert right now buying Pam all these cute and folksy Christmas gifts.

I have to imagine the conference and Michigan like the flattery. ESPN basically shit on the conference for a good chunk of the last decade although it should be noted FOX has opted to double down on Clay Travis while ESPN has pushed Mark May to the side. As the conference begins their negotiating process in the coming year, I think it’s likely the conference will look to steer the conversation to a place where FOX isn’t just an alternative or an option for ESPN to worry about, but rather a preferred and vetted partner that just needs to show them the money. Perhaps FOX can pull off a miracle in removing ESPN entirely which would be a rare “holy shit” turning point in the sports media world.

Regardless of what shakes out, FOX rolling out the  khaki carpet has been a shrewd way to warm up a conference whose fans haven’t been too pleased with their current television partner and who probably had some reservations about a drop in ratings and production quality leaving ESPN might have. If that indeed happens, who would have thought a khaki bus and five kids right around drinking age would be the ace in the hole that could break ESPN’s near monopoly on the sports media landscape.