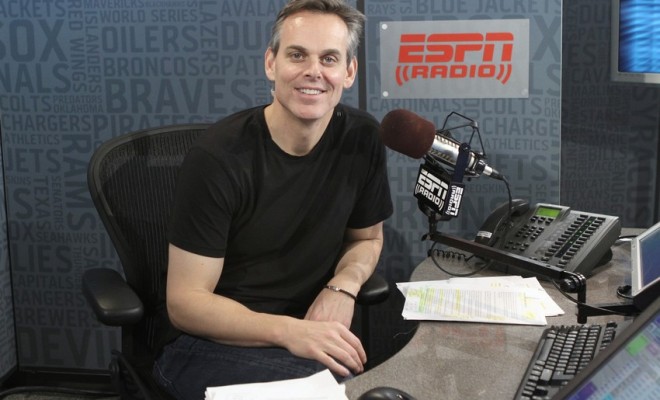 Picture yourself walking down a major American city on a fine late spring afternoon. Maybe you have your ear buds in listening to the hottest sports takes of the day to get the blood boiling.

Now picture walking past an otherwise anonymous man in a trench coat who opens the coat right in front of you, and each and every passerby, trying desperately to get attention from anyone who will stop to gawk in horror.

Colin Cowherd is the radio equivalent of that man—that is to say, his faux-radio caller straw man is that man—and it’s worth mentioning his brilliance, even if that runs the risk of exposing, if you pardon the pun, his entire gambit (video via SportsGrid).

The best thing about Cowherd’s straw man is that he makes just enough sense to draw you in without exposing himself to everyone. (In this analogy Skip Bayless is sprinting down the street without any clothes on screaming about Tim Tebow’s vaccinations.)

Cowherd’s comment Tuesday was about Ray McDonald and specifically how the NFL needs to stop trying to treat the “symptoms” of domestic violence and start looking at eliminating the “cause” of the problem.

In other words, Cowherd thinks the NFL needs a zero tolerance policy on domestic violence, but his straw man—the imaginary caller Cowherd has been going to for more than a decade to argue against himself—isn’t ready for that conversation, according to Cowherd.

How could a fake caller not be ready for a conversation, you ask? (Oh, crap, did I just do exactly what he di— Let’s move on.)

Domestic violence is a one-sided debate, so from a sports talk radio standpoint, it’s a horrible topic. There is no one on the planet—even Cowherd’s fake caller guy—who thinks those arrested for domestic violence should go unpunished, so the only viable conversation for those in the business of professional conversations is how severe a punishment players should get.

That’s honestly a little boring too, so Cowherd changed the conversation from one about domestic violence and the penalties the NFL should levy, to one about denying minorities the ability to make a living.

“Are we going to be comfortable with that,” Cowherd asked himself after bringing up his own point about a zero tolerance policy the NFL is on record stating it will not institute (more on that in a moment).

“Are we going to be comfortable with it? Because you better be ready to tackle that issue, of denying minorities in America jobs. That is a real issue. It will be met with great opposition, it will be incredibly uncomfortable.”

Denying minorities jobs is a real issue, but it’s not the real issue regarding McDonald or the any of the recent cases involving domestic violence in the NFL. It’s just that three hours a day is a long time to talk (trust me when I say that) and doing it like Cowherd with no co-host has the guy talking to himself constantly in a never-ending attempt to create viral content.

If you ignore the man, he wins because others aren’t going to ignore him. He is immensely popular, and this exact shtick is a big reason why.

If you point out his racket, he wins simply because you’re talking about him. He doesn’t even care if he gets exposed. In some cases, that’s the entire point.

“I guess for my business it will end up being a lot of good dramatic radio segments, but that’s the world we live in now.”

It’s the world Cowherd has lived in forever, from straw man conversations about John Wall to Roger Goodell being a father figure to black NFL players to whatever other “talking about race because it’s uncomfortable” conversation du jour he has with himself.

“Oh, Colin” he says over and over again, mimicking the caller that will absolutely call in at some point in his radio show to justify the argument he started with himself. That always leads to his acolytes undeniably calling to echo his original belief, justifying the point of both sides of his own personal argument.

It’s sports radio genius, and Cowherd does it better than anyone else. If you ignore him, he can say it’s because you are “uncomfortable” talking about real topics like race. If you engage, he’s already played both sides of the argument, so either way you want to go, he’s already gone. Long gone.

Unless he’s not. See, the issue with this particular straw man is that he’s using the universal opinion of zero tolerance to set up the “real” conversation of denying minorities jobs, when there is little chance of a zero tolerance policy being instituted in the NFL anytime soon.

From USA Today in October, Lisa Friel—a well-respected New York prosecutor who specialized in sex crimes and one of Goodell’s new czars—addressed the notion of zero tolerance, shooting holes in the idea:

A lot of people think the commissioner should impose a “zero-tolerance” policy. That terminology to an expert like me in this area means, if you do it once, you are out forever. Kicked out of the league, you never play again. That’s what zero-tolerance means to us experts. That is, we all think, bad idea as a policy. Because if you impose zero-tolerance, if you think things are under reported now, especially in the domestic violence area, if a wife or a girlfriend thinks that if they report an incident that this will be the end of her husband or boyfriend’s career, ever in the league, that is going to discourage reporting and it will not have the effect that we want.

In that interview, Friel explained that “no tolerance” is not the same as “zero tolerance” and the NFL has “no tolerance” for domestic violence, instituting a suspension of six games or more for a first offense, depending on the circumstances.

There is no zero tolerance policy in the NFL, and if you think there should be one, experts in this field disagree. (Note: this is actually an emerging philosophy in the space, and with a wife who has a PhD in criminology with colleagues who study both sex crimes and domestic assault cases similar to what has gone on in the NFL, expect a lot of literature to be published on this in the next few years.)

If Cowherd wanted to be progressive in the space, there’s merit to the debate of zero tolerance. The issue is, a lot of us (Cowherd included it’s safe to assume) have had that part of the conversation for months. That’s also kind of boring. So what else is new and fresh and topical?

Reading names of black NFL players and pointing out how uncomfortable that makes the straw man is new and fresh. And… topical.

And yet, the conversation that led to us taking away minority jobs in the NFL started with the notion of zero tolerance coming soon. This is the ultimate straw man gambit, in that it’s something Cowherd knows won’t happen—Roger Goodell has come out in the last few weeks and reiterated Friel’s thoughts on the matter—so Cowherd can go back to the well on both sides whenever he wants to, for as long as he needs to.

The next time a player is arrested for a case of domestic violence, Cowherd can play the “why don’t we have zero tolerance” at the same time he’s playing the “be careful of the slippery slope of zero tolerance” to those who support the original idea. And if you question him, it’s just because you’re uncomfortable talking about real topics.

He will do it again because that’s exactly what he did with McDonald’s situation. Timing and context don’t matter to the straw man. Someone else will always be walking down that street.