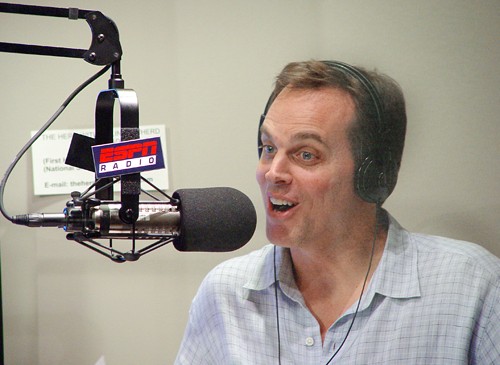 ESPN Radio’s Colin Cowherd has a long memory. And even though it’s been five years since he made a bet with his former producer who didn’t pay up, it doesn’t mean that Cowherd is ready to forgive.

Making an appearance on 710 ESPN in Seattle, Cowherd told the Danny, Dave and Moore show that he didn’t appreciate the fact that former producer Tom Wassell hasn’t paid $100 for a wager they made on the 2010 NFC Championship Game between the Chicago Bears and the Green Bay Packers. Wassell picked the Bears while Cowherd went with the Packers.

Cowherd told 710 ESPN, “He still owes me $100, which he’ll never pay me back. At this point I just like having that over him. I really do. It’s just nice, the guy owes me a-hundee.”

Despite the fact that co-host Dave Wyman, a former NFL linebacker offered to shake down Wassell on Cowherd’s behalf, the ESPN Radio host declined.

For his part, Wassell did donate $100 to charity in hopes that Cowherd will accept that as payment:

I just made a donation for $100 to the Leukemia & Lymphoma Society instead of paying @ESPN_Colin back. Call it even? pic.twitter.com/LK91wiDjab

No word on whether Cowherd has decided to accept the donation to call the bet even, but you can rest assured that he’s having fun holding the wager over his former producer’s head.