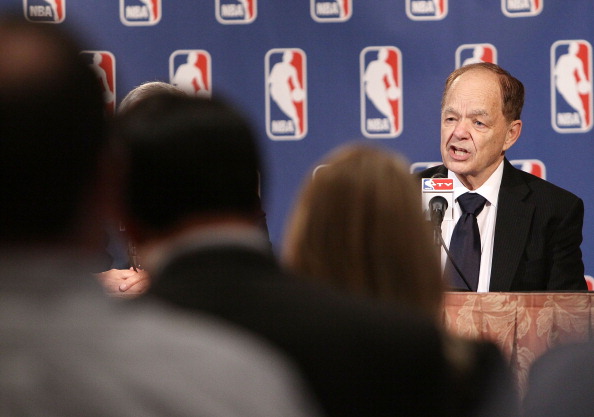 You’re a longtime NBA writer with your own independent website.  You have a good sized following on social media.  You have exclusive access to the NBA Draft lottery, one of the few events in the sport that draws players, management, and owners together for one night.  This is a great opportunity.  You have dozens of options for a profile piece including the star college players on hand for the event, Hall of Famers like Larry Bird, and current All-Stars like Russell Westbrook.  You have teams who tanked all season for this moment and teams hoping for that one more piece to the puzzle that can build a true contender.

So what do you choose to write about if you are Chris Sheridan?

None of that nonsense of course.  You choose to write an entire creepshow column dedicated to the “trophy wife” of Timberwolves owner Glen Taylor that might as well be entitled “Women are things.”

This is how Sheridan chose to begin his column entitled, “Inside the ping-pong ball room at NBA draft lottery.”

One year after Mallory Edens captivated us all at the NBA draft lottery, a new NBA rule deprived us of a close-up look at the trophy wife of Minnesota Timberwolves owner Glen Taylor.

Her name is Becky, she is fantastic looking, and she was supposed to have been onstage instead of the 74-year-old Mr. Taylor as the T-Wolves won the top pick in the 2015 NBA draft.

Unfortunately, the puritans at the NBA instituted a new “no family” rule for this year’s lottery, which also means we’ve seen the last of Nick Gilbert and his bow tie.

Yes, this is a shame. But the lottery is not about trophy wives or trophy daughters or even trophies — at least in the short term. It is about hope for the future, and the T-Wolves have a little more of that now with a young core that includes Rookie of the Year Andrew Wiggins, 2013 No. 1 overall pick Anthony Bennett (if he does not turn into LaRue Martin 2.0) and the Spaniard who is the Mallory Edens of young men, Ricky Rubio.

There is no inside scoop from the evening in those words aside from Sheridan’s uber-crush on Becky Mulvihill.  It’s as if the biggest story from this year’s draft lottery was the travesty of justice that Sheridan couldn’t gawk at her on-stage.  Yes, it’s a “shame” those “Puritans” at the NBA wouldn’t allow Sheridan and other media members another chance to ogle an attractive woman in public.

Last year was horrifying enough with the media falling over itself to see who could out-creep each other when 18 year old Mallory Edens represented the Milwaukee Bucks.  Here, Sheridan doubles down on that by envoking Edens and expressing his desire to create a sequel with Mulvihill stepping into the spotlight.

And that segue?  Yikes!  The best and most relevant storyline Sheridan could find out of Minnesota winning the draft lottery is connecting “trophy wives” and “trophy daughters” with actual NBA trophies.  In addition to the debasing attitude towards women, it’s one of the most anomalous openings to a column we’ve seen in some time.

Sheridan’s column only gets more strange from there.  After trying to talk about actual basketball implications coming out of the draft lottery, Sheridan continues to weave in his story arc chronicling his fixation with Mulvihill and creeptastic segues:

You want losers aside from those of us who have never gazed upon a live shot Glen Taylor’s wife, pictured above? That distinction belongs to the New York Knicks, who dropped to fourth in the lottery after finishing with the second-worst record in the NBA. They will get a talented consolation prize, and they have max cap room to work with this summer as well, but the allure of playing for Derek Fisher in the triangle offense with Jim Dolan watching from his courtside seat just a few feet away is about as alluring as the thought of sleeping alongside Glen Taylor, which is the price the former Becky Mulvihill must pay for marrying into all that money ($1.8 billion is Taylor’s net worth) eight years ago.

I’ll excuse you for a few moments if you need to bathe yourself in bleach after reading that.  How many NBA writers, let alone basketball fans or human beings in general, would think of connecting “NBA Draft Lottery” with “T’Wolves owner’s life in the bedroom.”  From reading this column, it’s almost as if Sheridan had planned to have a Darren Rovell-Kate Upton moment with Mulvihill on the draft lottery stage.  Gaaaahhhh.

Finally, Sheridan reaches his climax in bringing all this uncomfortableness into this neat and tidy one-line paragraph where he again links Edens and Mulvihill under the common refrain of “women are things.”  According to Sheridan, young Mallory Edens has the great fortune of growing up one day to be someone’s “trophy GF” and a possession to be objectified by him and his cohorts.

Taylor has his trophy wife. Edens will one day be somebody’s trophy GF.

If the column wasn’t enough, Sheridan tweeted about not seeing the “trophy wife” on stage last night, too.

Sheridan’s column has rightly been torn apart by even his own Twitter followers.  These are among the immediate replies to its posting last night: 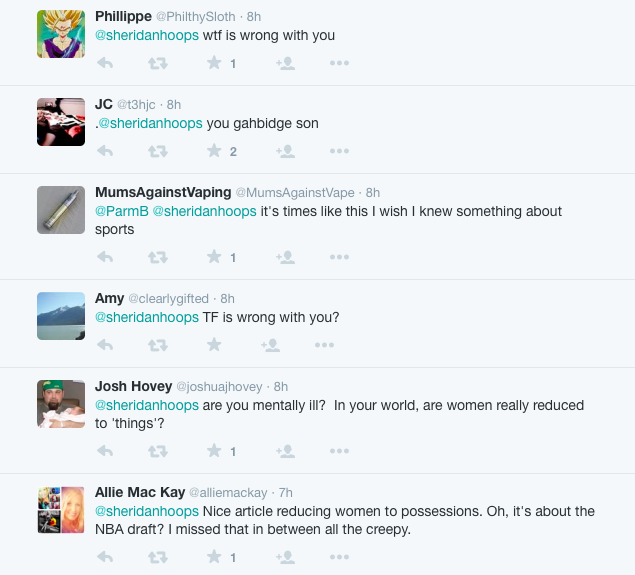 Aside from the disturbing DNA of this column as far as its objectification of women goes, it’s also an incredibly odd piece of sportswriting.  Again, Sheridan had fantastic access to the draft lottery, he even told readers what ping pong ball combination came up to give Minnesota the #1 pick and who was in the room representing the team. And yet, with so many potential great and informative storylines, he chose to lay bare his infatuation with Becky Mulvihill and Mallory Edens for all the world to see.

UPDATE: Edens called out Sheridan on Twitter over being labeled a “trophy daughter.”

Apologies for going overboard on irreverence. Did not intend to offend anyone. My bad.

UPDATE II: Sheridan again apologized and removed the article from his website:

I made a mistake in judgement. Truly did not mean to offend anyone. Article has been taken down. My sincerest apologies.