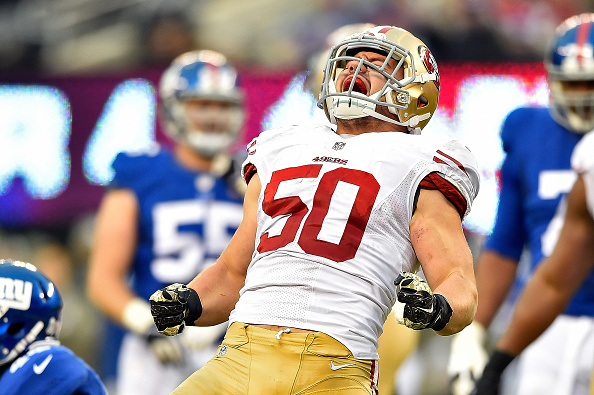 Chris Borland’s retirement has become the latest battleground in which to wage the ongoing fight over football’s future.  Although Borland isn’t the first NFL player to retire at a younger-than-normal age this offseason, his choice to step away from the game at age 24 due to concerns about concussions produced a flood of polarizing reactions from every different angle.  While many applauded Borland for making the very tough and very personal decision to walk away from the game and valuing his long-term health, others expressed disbelief or righteous anger.

First there was 49ers radio analyst Tim Ryan went as far as to say that he was “pissed off” about Borland’s decision and that Borland “quit” on the team.  But there were also prominent national voices, from Mike Florio to Adam Schefter, that voiced astonishment over Borland giving up on the money and fame that comes with being an NFL player.

Americans routinely assume far greater physical risks for far less money and fame than the risk/reward of playing in the NFL.

The anti-football agenda sees Chris Borland as a tipping point. There are still far more potential NFL players than there are NFL jobs.

Before we go any further, Borland’s decision to retire is his own.  If he doesn’t feel like the risk of potentially being diagnosed with CTE or suffering head trauma from playing another decade of football is worth the paycheck and the fame, then more power to him.  If he doesn’t want to take the risk of seeing his name alongside the likes of Junior Seau one day, that is his prerogative.  He doesn’t owe a darn thing to Tim Ryan or the 49ers or all the trolls on social media calling him every name in the book or questioning whether or not he really loved football.  It’s his life, his brain, his health, his future.  End of story.

There’s no doubt that seeing someone with such talent walk away at age 24, with the definitive reasoning being concussions, is jarring.  And in the coming days, the conversation will turn to whether his decision is a tipping point for football’s future and if more athletes will either retire at a younger age or abandon football altogether.  To answer that question, it’s worth examining the pitch on which the debate over concussions and football’s future will take place at this moment in time.

Forgetting the more incendiary remarks and “hot takery” for the time being, the reaction to Borland’s retirement focusing on the money he’s giving up and not the long-term health he’s protecting is unsettling.  As is the effort to try to dismiss Borland’s retirement by saying there are many lined up to take his job.  That was the message from Packers director of player personnel Eliot Wolf.

That was also the message from the NFL when they released a statement saying the game has never been safer.  That rings a little hollow if only for this reason – the NFL doesn’t feel the need to respond publicly to every player’s retirement.

It wasn’t all that long ago the debate was not about players retiring early, but playing football at all.  Mike Ditka, Troy Aikman, and Terry Bradshaw – three Hall of Famers currently covering the game for national networks – have all gone on record saying they wouldn’t want their sons playing football because of the health risks.  So have a litany of others ranging from Bob Costas to LeBron James to President Obama.  Nearly four in ten Americans agree and say they wouldn’t want their child playing football.  While that’s not a majority, it’s still a significant percentage.

We are just a year and a half removed from the Frontline League of Denial documentary that brought the NFL’s concussion crisis to the national stage.  The settlement over the massive concussion lawsuit that faced the league is still under scrutiny in federal court.  The NFL’s concussion crisis can’t be swept under the rug, no matter how much the NFL might like for it to be possible.  Because every time a former player is diagnosed with CTE or tragedy strikes or a professional athlete hangs up the cleats in the prime of his career, this issue will keep coming back time and again.

Seeing the central argument shift from “would you want your son playing football” to “how could you give up all that money to play a game” or “1,000 guys will be after his spot” neglects all the ground that has been covered in the last 18 months.  It neglects the fact that Borland was able to make an informed decision about the risks of continuing his professional career that those who came before him could not do.

In that sense, the current focus on Borland’s salary or all the players that would be glad to take his place seems like a step backwards from where we just were a year ago in the ongoing dialogue concerning the game.  Focusing the perspective on the glory of protecting the shield or the money that comes with it instead of the health of the players minimizes the impact of Borland’s decision.  It also minimizes just how jolting it is to see a potential Pro Bowl linebacker give up his dream of being an NFL player after just one season because he simply wants to live a long and happy life.

Chris Borland’s retirement must be a tipping point.  Because if it’s not, and we can just dismiss Borland by saying he’s ultimately replaceable, then why does the entire conversation regarding concussions even matter anymore?