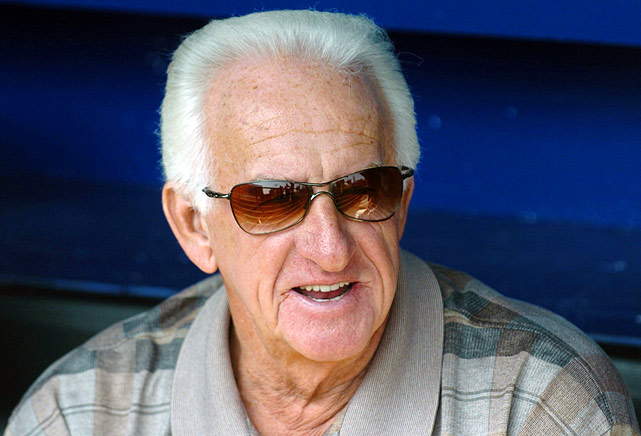 Brewers radio announcer and all-time great baseball voice and funnyman Bob Uecker was injured in a freak batting practice incident earlier this week.  Uecker was watching batting practice before Monday’s game against the Royals when a baseball bounced out of the cage and struck him in the head.

Uecker actually missed Tuesday’s game and spent a night in the hospital for observation after being diagnosed with a concussion.

Via the Milwaukee Journal-Sentinel:

Legendary Brewers radio broadcaster Bob Uecker sat out the game Tuesday night against Kansas City at Miller Park with a mild concussion he suffered when struck by a ball during batting practice the previous evening.

The good news was that Uecker otherwise was doing well and resting at home after spending a night in Froedtert Hospital for observation. Because Uecker was not scheduled to go on the Brewers’ trip to Kansas City and Colorado that begins Wednesday, the decision was made for him to rest and take advantage of the longer break to recover completely from the concussion.

Uecker, 81, suffered the concussion while standing behind the batting cage Monday when a line drive struck the protective screen in front of the batting practice pitcher and caromed back over the cage and struck him on the forehead. Uecker laughed about it at the time but began feeling out of sorts during his radio broadcast and left before the end of the game to be examined by team medical personnel.

Thankfully Uecker should be ok after the incident and be able to return to the broadcast booth soon.  It sounds like a fairly scary situation that could have been a lot worse.  Among people 80 and over, Bob Uecker is probably one of just a handful who could laugh off getting hit in the forehead with a baseball.  Knowing Uecker and his incredible sense of humor, when he does return to the mic he’ll probably have a few great one-liners about the entire episode.