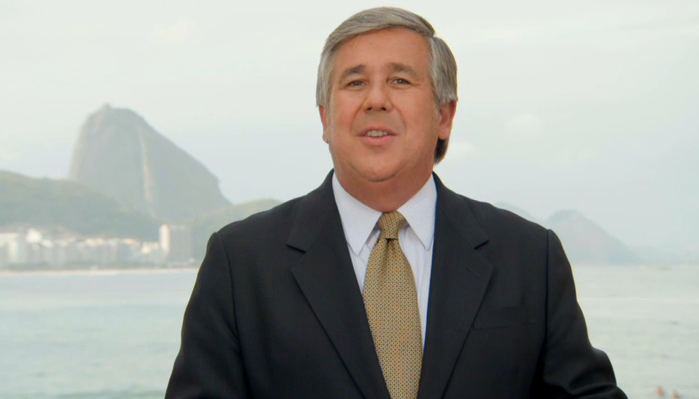 How good is Bob Ley?  On Tuesday during live coverage of Sepp Blatter’s announced resignation, his name was trending on Twitter.  It takes a special kind of talent to trend on Twitter for something good when you work in television.

Ley has been a shining star this week with his irreplacable coverage of the ongoing FIFA corruption schedule and resignation of Sepp Blatter.  And just as he was ushered on the air to anchor live afternoon coverage with ESPN’s impressive cast of soccer analysts and experts, ESPN announced a contract extension for The General.

Ley will remain as the host of Outside the Lines as it approaches its 25th anniversary as well as anchoring ESPN’s soccer coverage.  Although Bristol has lost out on the World Cup, ESPN still has international soccer coverage through the US National Teams and Euro 2016 which Ley will be the face of.

The announcement from ESPN:

Bob Ley, ESPN’s longest-serving commentator, has signed a long-term extension to remain with the network he joined as a SportsCenter anchor on its third day of operation (September 9, 1979).

The agreement comes as the award-winning Outside the Lines, which Ley has hosted since its inception in May 1990, celebrates its 25th anniversary.

“I am thrilled that Bob Ley will continue at ESPN — for the past 35 years he has set the standard for sports journalism and we and fans have been the beneficiary,” said ESPN President John Skipper. “At any significant news event we can count on Bob to be prepared, objective and keenly attuned to the issues and the search for informed truth. On the daily desk at Outside the Lines, at Town Hall meetings and SportsCenter specials, he has provided distinct and distinguished coverage of the most important news related to sports. No one in sports journalism stands taller in this era. We are proud to keep him in the ESPN family.”

Ley was most recently lauded for his hosting of ESPN’s day long coverage following the indictments of several senior FIFA officials, and the subsequent presidential election for soccer’s global governing body. ESPN capitalized on Ley’s life long passion for soccer which has seen him host the 2014 FIFA World Cup from Brazil and the 2011 Women’s World Cup from Germany, and serve as lead commentator for World Cup ’98 and host of ESPN’s on-site studio coverage of the 2010 FIFA World Cup from South Africa.

Ley will also remain host of Outside the Lines as it enters its second quarter century, (to be celebrated by a primetime anniversary special July 7 at 7 p.m. ET on ESPN). The award-winning OTL has evolved from periodic specials to a six-days-a-week series (Sunday – Friday) which has captured 11 Sports Emmy Awards and three CableACE Awards as cable’s top Sports Information Series. Ley and Outside the Lines have received the most coveted prizes in TV journalism; including a recent duPont Award and Peabody Award, as well as multiple Edward R. Murrow Awards while also being recognized with Northeastern’s 1995 Excellence in Sports Journalism Award and Lifetime Achievement honor in 2009 from the University’s Center for the Study of Sport in Society, together with the University’s School of Journalism.

“I’m very fortunate, each day, to continue to find the challenge in the stories and issues in our sporting culture, and equally lucky to have the time and the space to examine them, working with the most creative and dedicated staff in the business,” Ley said. “Between our reporting and analysis on Outside the Lines, and the opportunities with our soccer coverage across the planet, I’m looking forward to our best work yet.”

Ley is an ESPN lifer and the heart and soul of the network.  Whenever a major story breaks, Ley is usually the person who ESPN wants on air.  And that’s not just for the soccer world, Ley’s live coverage of the Boston Marathon bombing alongside Jeremy Schaap was some of ESPN’s finest work in the last decade.

In sports terminology, Bob Ley is the person ESPN wants taking the last shot.  And he’s going to do that for many more years to come.

But more than that, he is one of the most respected and admired individuals working in the sports media today.  And in fact, one could easily make the case that in a world where distrust in the sports and news media is on the rise, Ley has risen to being one of the most trusted people working in all of television.  His work in the past week has been some of the best in his career as he’s held down coverage for hours at a time, mixing in his journalistic bonafides, incisive questions, and a cutting sense of humor.  His re-signing is fantastic news for ESPN, fantastic news for soccer fans, and fantastic news for the importance of sports journalism at the self-proclaimed worldwide leader.

In fact, the only bad news in this is that Ley now won’t be able to run for FIFA President.