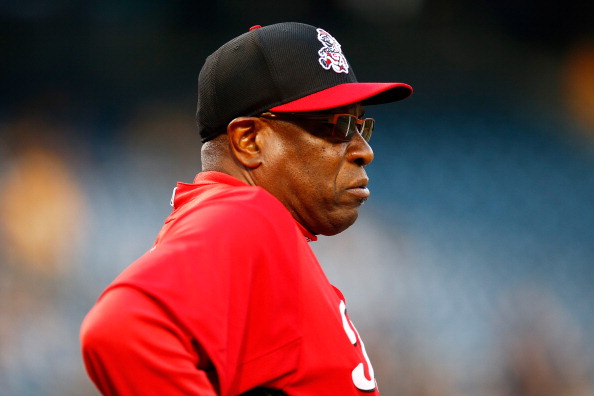 Dusty Baker is returning to baseball, and he’s again doing so in a broadcasting role. Baker’s well-known for his playing career (with the Braves, Dodgers, Giants and A’s from 1968-86) and his managerial career (with the Giants from 1993-2002, the Cubs from 2003-06 and the Reds from 2008-13), but he also was a broadcaster for ESPN during the 2006 playoffs and the 2007 season. Now, he’s taking up the microphone again as a TBS analyst, teaming with Pedro Martinez and Gary Sheffield as well as host Casey Stern for pre- and post-game studio shows during TBS’ National League playoff coverage, as well as pre-game shows for the final Sunday MLB on TBS regular-season games on Sept. 27 and Aug. 4. Baker spoke to Awful Announcing this week about his new role, the perspective he brings, the Mets’ usage of Matt Harvey, and how baseball has changed since his previous stint in broadcasting. Here’s the transcript of our conversation:

AA: Why’d you decide to take this job with TBS?

DB: They kind of came at me and asked if I’d be interested. The length of time, the excitement of the playoffs, the excitement of the people I’m working with, Pedro and Sheffield who I’ve known for years and years since when they first came into this league. I also liked what Turner kind of represented. I’ve watched Barkley and Shaq and Kenny Smith and Ernie [Johnson] and I think they do a great job. They’re kind of open to do what they feel and really be themselves, and that attracted me.

AA: What’s it going to be like working with guys you’ve known for a long while, like Pedro and Gary Sheffield?

DB: Well, we’ll see. I’ve never worked with them before, but I don’t anticipate any problems. These guys are straightforward, honest guys. They’re going to tell you what they feel. It’s easy to be around people like that. I have a tremendous amount of respect for them and I think they have a certain amount of respect for me. It should be easy and fun. It’s work, but it’s fun. I think we’re going to have a great time. You know, I follow baseball; I don’t watch it from the first inning to the ninth, but I watch it every day almost, because I like baseball and I like following the pennant races.

AA: I know you did some baseball commentary work with ESPN a while ago. How’d that go? How’d you enjoy the commentary role?

DB: I enjoyed it a lot, actually. I enjoyed commentary more than I did studio, I could interject things during the course of a game that the average person may not see. I enjoyed it. They bent over backwards to make it comfortable for me. I could do some studio from Sacramento, I didn’t have to go back all the time, but I enjoyed it when I was back there, I enjoyed the people there. At the time, my wife and I, I was in between jobs in baseball, but it kept me in baseball and it let people see a different person than they saw on the baseball field, because, you know, it’s hard to really translate how you are as a person, how you feel down on the field. You’re playing kind of mental dodgeball, verbal dodgeball every day. You know, in the booth, it was great for the time. My dad was sick at the time and ended up dying shortly after, so it gave me time to be home with my father, and I was building a new house, so, you know, any time you’re at a crossroads and you’re still doing pretty well and enjoying what you’re doing, that makes life better.

AA: Do you think that previous TV experience is going to help you in this new role?

DB: Well, it certainly can’t hurt. The thing about it was, I was on TV every day as it was, you know? So, it was no big deal for me to be on TV, because it was like this everyday thing. Yeah, I’m going to enjoy it.

AA: Do you think baseball’s changed significantly since your last TV stint, or are you going to approach this one the same?

DB: Yeah, it’s changed. It’s changed a lot, with the overall philosophy of how the game should be run, with the sabermetrics, the changing of the guard so to speak, and those that are in charge. There’s less baseball people in charge and more businessmen in charge. But there’s still a spot for guys that played the game. If you didn’t play the game, you may know the game, but you don’t see things in advance like we see things. The whole thing about being prepared is you can be prepared, but you also have to have forethought and anticipation and feelings on what you feel may happen. I remember Hank Aaron telling me when I was a kid, “You’ll never be a great player until you learn to trust your feelings.” And the feelings part of the game has been kind of taken out of the game. And there’s a spot for it. There’s a spot for sabermetrics, there always was, it just wasn’t called sabermetrics, know what I mean? It was called matchups or whatever. You play the count. Now they’ve got a name for almost every situation.

DB: I bring both, because I remember playing, and I remember coaching, and I remember managing. I still remember how hard the game is to play. These guys, they make it look easy, and sometimes I think we get a little too critical of people because they make it look easy, but the game is difficult. And both sides are getting paid to beat each other. Your side’s not going to win all the time and mine’s not going to lose all the time. You’re playing against the best players in the world, and then it boils down to who’s the smartest, who’s going to react the quickest, and apply it upon demand.

AA: Have you been following the big controversy with the Mets and Matt Harvey and how they planned to use him?

DB: Yep, I’ve been following it, and I was kind of surprised on how it transpired with no warning, kind of. Maybe the organization had warning and didn’t share it or whatever. It just kind of surprised me. I understand it, I understand it, but I hope they can try to work it out some way because the team needs him and the team’s depending on him. That’s a tough situation for him to be in, a young guy, a team that hasn’t won in years and years, for the city of New York, and for his teammates and for him. Talk about being between a rock and a hard spot, man, that’s it!

AA: How do you think that is for the team and the manager, having to address how much they’re going to use him over the course of the playoffs?

DB: Well, and is he going to be sharp when he gets there? Because, you know, players rust out as well as wear out. If he’s not pitching, I don’t see him being as sharp even if he’s rested.

AA: So do you think they’re taking the correct approach? How do you see it?