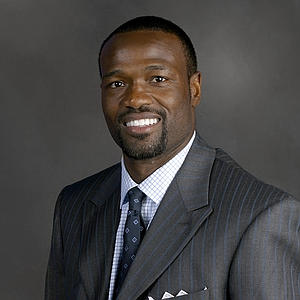 With televised sports being such a crowded marketplace, people have to take on personalities to try to stand out from their peers and be noticed.  Skip Bayless gains new life as the biggest, ugliest bridge-dwelling troll in sports.  Ron Jaworski and Trent Dilfer talk seriously about the NATIONAL… FOOTBALL…. (dramatic pause)… LEAGUE.  Mark May is that guy that hates Ohio State.  Merril Hoge is still trying his darndest to make "factor back" into a thing.

Developing a distinguishable personality offers a risk-reward proposition, though.  While one might break out from the pack of bland, vanilla, generic television personalities, it sometimes comes with a price.  To get noticed, one often takes on controversial viewpoints and becomes a polarizing figure.  One risks losing all transparency and becoming a contrived character actor instead of a real person with dynamic thoughts.  Furthermore, that person also runs the risk of being cemented into a certain typeset, unable to break free from a given reputation or position and known for the remainder of time as "the ____ guy."  No matter what Skip Bayless does for the rest of his life in sports, he'll always be the Tebow guy.  It's a choice he made.  It brought him fame and derision and mockery and probably a whole lot of money too.  But along with that, Bayless will never be able to change that perception, he'll never be able to offer something that's different and legitimate, he'll always be confined to that very small-minded space when it's all said and done.

In the last year, Harold Reynolds has become the "old school guy" on MLB Network in his debates with "new school guy" Brian Kenny.  HR is a long way removed from the most infamous hug in the history of sports and is generally regarded as fairly likable.  He's always had a gift in front of the camera going back to his earliest days at ESPN.

But as far as being a baseball analyst goes, he's become reviled in many circles as the representation of backwards thought as he clings to this "old school" philosophy.  Reynolds has become a personification of trying to drag baseball kicking and screaming back to the stone age.  A man who doesn't care about facts, or logic.  If this were a different time, Reynolds would be the one still be clinging to the notion that the sun revolved around the earth.  So much so that there are scores of individuals wishing to have Tim McCarver back as Reynolds (and Tom Verducci) are reported to be the new lead analysts for MLB on Fox for 2014.

Lana Berry retweeted many of these classic one-liners from the very funny Heard on MLB Tonight Twitter account showcasing the most bizarre Reynolds quotes that make him appear to be totally aloof to baseball in 2014.

I'm being straight up honest. I have no idea what run differential is. – Harold Reynolds

"You can talk about on-base percentage all you want, but I didn’t give [Votto] $225 million to put him on base.” – Harold Reynolds

"Maybe I don't know what I'm talking about." – Harold Reynolds

"Not bunting is like telling a NFL team they can't throw deep. The bunt is an offensive weapon." – Harold Reynolds (h/t @maxdank420)

With his reputation as the defender of the old guard, Reynolds has created a situation where by the nature of picking a side in a heated debate and sticking with that viewpoint, he's already alienated a large section of the very fans he will now be reaching out to.  When he has appeared out of his depths, or misspoke, or said things that were statistically inaccurate, it's caused critics to pounce.  Just take a look at the reaction to Reynolds' MLB Draft analysis.  It's like the internet was Mike Tyson and Reynolds was poor Marvis Frazier.

Perhaps Harold Reynolds will play just fine with casual fans who will tune in for the World Series with his well-spoken, affable demeanor.  Perhaps they won't be bothered by vague generalities and a disregard of advanced statistics.  Perhaps his chemistry with Joe Buck and Tom Verducci in the booth will be terrific and Fox's MLB coverage will receive the makeover it so desperately needs.

But there are also those that will reject Reynolds because of the "old school" persona he has established.  It's a no-win situation.  If Reynolds continues to dismiss progressive analysis, he'll deepen a still widening divide.  if he moves away from his "old school" persona and attempts to bring all baseball fans together in peace and harmony, it will appear inauthentic.

If Fox does indeed hire Harold Reynolds as their new lead analyst, the network will have already lost a significant portion of their dedicated baseball audience before he even steps into the broadcast booth next to Joe Buck for the first time.  That's the trouble with being "that guy."  You can't change, even if you wanted to.