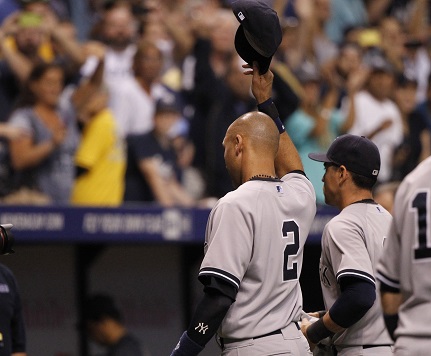 Have you heard of a fellow named Derek Jeter? If so, you may be aware that he is retiring from the sport of baseball at the end of this season. Given the way the Yankees have been playing, that will almost definitely be this Sunday. Now, we try to speak with both reverence toward the athlete that Jeter was and cynicism toward the public figure Jeter that the media swoons over and tends to over-cover.

That said, ESPN’s plans for (yeah) Jeets’ final week in the bigs sounds reverent and mostly earned, given Jeter’s impact on the sport. What’s strange is that, because of the Yankees’ lack of playoff contender status, very little will be done in terms of an actual game broadcast. In fact, ESPN Radio and not ESPN (MLB Network will air it on television) will broadcast Jeter’s final game in the Bronx on Thursday against Baltimore. The radio network will air special one-hour pre-game coverage starting at 6 p.m. ET.

The crux of ESPN’s Jeter Week coverage will come from SportsCenter and Baseball Tonight. Pedro Gomez will be live from Yankee Stadium on Thursday for the aforementioned final home game, while Jeremy Schaap will be live from Fenway Park on Sunday for the overall grand finale of Jeter’s career. Eduardo Perez, Doug Glanville and Mark Mulder will all discuss the proceedings on SportsCenter, while Baseball Tonight will have twice-a-night coverage and conversation on Jeter all week.

SportsCenter will then give Jeter the rare solo athlete special edition treatment. SportsCenter Special: Derek Jeter airs Friday at 7:30 p.m. ET. Will it include that legendary baseball diamond of Jeter’s exes?

Elsewhere, Outside the Lines will feature a story from Chris Connelly on life in the Bronx without Derek. ESPN’s digital machine will have feature stories from Buster Olney, Jayson Stark, Jim Caple and Darren Rovell, local content and social content. SportsNation will do a ranking of his top 10 career plays.

Consider it Jetes Week on ESPN. Honestly, this mostly seems like it’s earned and a reasonable amount of coverage for this event. Jeter was the most famous athlete in baseball for two decades, might as well send him off as such. At least it’s not as bad as TebowMania.