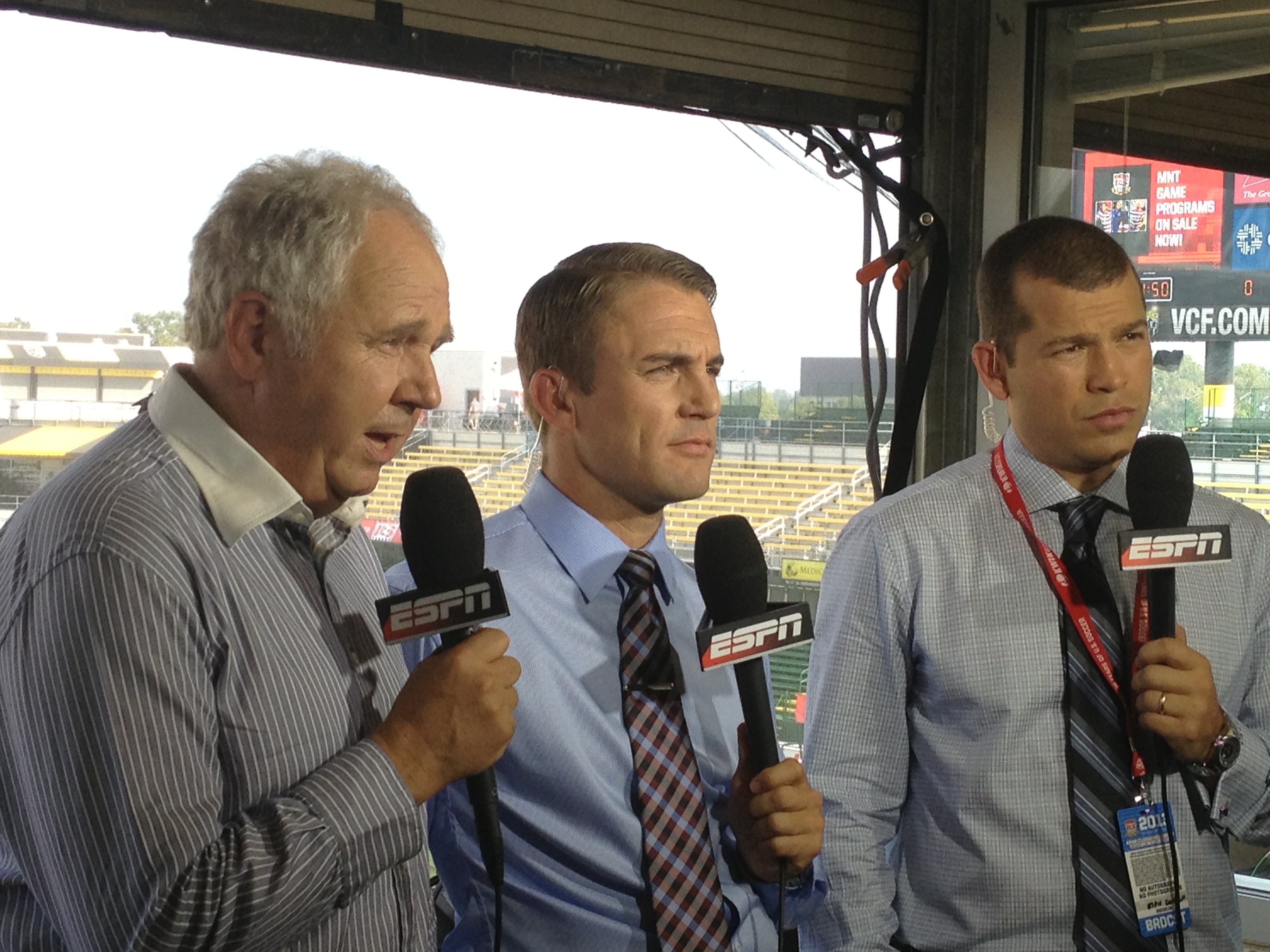 Brazil and Croatia kick off the 2014 World Cup a week from today.  To help us get ready for the globe’s greatest quadrennial tournament, it’s time once again to collect some of the best minds from around the internet for a broadcast fantasy draft. You might recall our NFL and college football versions from the last couple years. This time, we turn our attention to the beautiful game.

Welcome to our World Cup Broadcaster Draft. Joining yours truly…

Each draftee was tasked with filling 9 slots for their fantasy World Cup broadcasting lineup. Any active, English language broadcaster was available to be drafted. Each person acted as the GM of their own network as if they were ESPN staffing their ideal broadcast crew for the 2014 World Cup from Brazil.

Here’s how they were drafted… 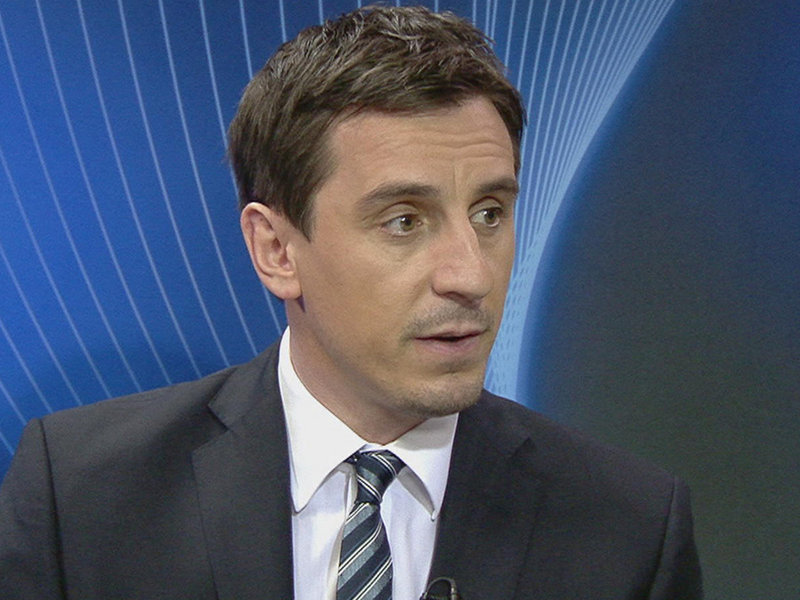 There aren’t many athletes who could leave the game, walk right into the television booth and not only succeed, but be so picture perfect for a role that he’d go first in a draft like this, but Neville’s work the last two years puts him as the leader in that category.

Frankly, I think his studio work is better than what he does in-game—when given time to prepare, his ability to break down a play is second to none—but I can’t think of anyone I’d rather have in my Saturday, Sunday or Monday night booth.

The choice between Ian Darke and Martin Tyler is excruciatingly difficult as both are among the best announcers not just in soccer, but in world sport period.  However, Darke proved in 2010 that he has a way of connecting directly with the audience that won over American sports fans.  He’s continued to build on “Go Go USA” in the four years since to be one of this country’s best announcers and the choice for me with Pick #2.

This pick comes with the disclaimer that I don’t think he’d accept the offer to take the role, mainly because he’s still playing for the Los Angeles Galaxy. And obviously, if for some reason he gets called back into the national team as an injury replacement, he’s even more unavailable. But I would have been on the phone with his agent as soon as Jurgen Klinsmann made his final roster cuts.

Donovan has done some TV work on Fox’s Champions League studio shows, so he has experience being on camera. So I’d have him on for some spot analysis after national team games, and whenever else I can fit him in. And if the U.S. should happen to crash out in the group stage, I’d offer Donovan the opportunity to provide a bookend to Klinsmann’s stinging analysis of the U.S. – including Donovan specifically – after the loss to Ghana four years ago.

Sure, it would be plenty controversial, and Donovan isn’t one to stir the pot. But if he said yes, it would get a ton of buzz and be a ratings winner. So I have to take the chance, and I have to take it before anyone else does.

In 2009, we were raving about Rebecca Lowe for her appearances on US television via the niche Setanta Sports network. Since then, we’ve seen her evolve from her appearances on ESPN and ESPN UK to her current role as the Premier League presenter for NBC Sports. She is the complete package. She’s incredibly knowledgeable about the sport. She is an excellent communicator. She’s quick on her feet, and her elegant appearance doesn’t hurt either. She’s a role model in a mostly male-dominated industry. Her success with NBC Sports was so influential that ESPN decided to hire Lynsey Hipgrave as the “next Rebecca Lowe” for its World Cup 2014 coverage on US TV.

If Gus Johnson ever wanted to learn a lesson about how to commentate, Derek Rae would be the go-to person. Rae has an attention to detail that far surpasses that of even many of the top commentators. His voice is filled with passion and excitement without the need to shout at viewers. Listening to Rae is like hearing a fantastic page-turner read out loud to you. Once you hear him, you’re hooked.

While US viewers don’t get a chance to hear Rae as often as we used to on Champions League broadcasts when they were on ESPN, Rae will be returning to US airwaves on a regular basis this summer for World Cup 2014. 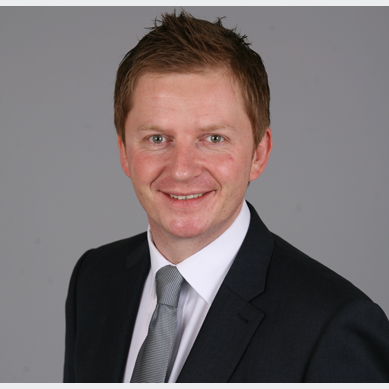 We’re only in the second round and I’m already getting nervous about whether certain people will still be on the board. I figured Arlo would be gone by now, but I’ll happily pick him for my crew. He needs no introduction to Americans at this point, thanks to his stellar work calling Premier League and Major League Soccer games on NBC’s networks.

It’s one thing to be a good broadcaster with a British accent. It’s another to mix that with the genuine understanding of American culture that Arlo has. That’s why he’s one of the few voices in the game who’s almost universally well-liked across the American soccer community.

The one English language voice across the world that is synonymous with football. I will gladly take the legendary Tyler to pair with Ian Darke and give my broadcast team the same fantastic problem that ESPN had in 2010 in having to choose between the pair who my lead play by play man will be. I had hopes of nabbing White or Phil Schoen as my second match caller, but Tyler is just too good to pass up in this spot especially considering play by play announcers are most valuable in soccer above any other sport.

I am not surprised Rebecca Lowe went first for studio hosts, and I agree with everything said about her, but if I had to pick someone to anchor my studio coverage for a month there is really no other choice than ESPN’s Bob Ley. He adds a level of gravitas to any event, and the respect within the industry is second to none. His career covering the beautiful game in America goes back decades, giving him the credibility to handle any story, on or off the field.

I don’t know if Ley would be my pick for a weekly domestic pre-game show, as his stature perhaps supersedes that role at this point in his career, but for a big event like a World Cup, there is nobody I’d rather have.