It's not too often that a relatively successful Twitter account with 20,000 followers disappears from existence, but that's exactly what happened to the @NFLInsiders account.  The account was not affiliated with the ESPN show of the same name, rather it appeared on the surface to be associated with the league itself.  @NFLInsiders mostly tweeted out links from NFL.com, but also retweeted various other accounts.  Here you can see a list of manual retweets that survive showing the account linking to NFL.com stories: 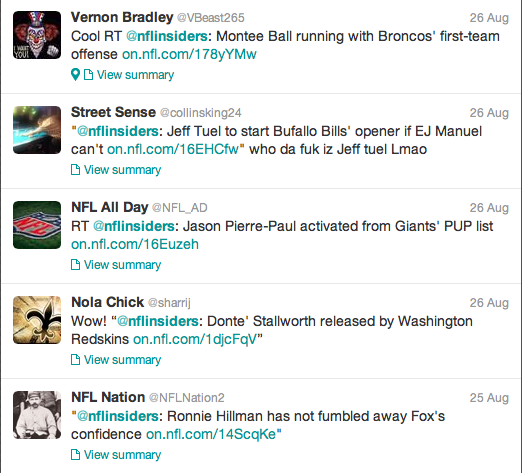 Some time on October 20th, the account mysteriously vanished from Twitter, but not before it took part in a scheme that would make Sarah Phillips proud.

While Twitter is an incredible source of news and instant feedback, it can also be an uncontrolled universe of rogue accounts, spambots, impersonators, and scammers.  Compared to the rest of the media world, much of Twitter is anonymous and vastly unregulated.  This Twitter underworld presented one of the most fascinating subplots of the Sarah Phillips scandal last year.  Phillips and her cohorts tried to subvert and/or take over popular parody accounts with hundreds of thousands of followers including @OhWonka.  The value in these popular (mostly legitimate) parody accounts come in their very large audiences, where links and traffic can represent serious sources of revenue.

The @NFLInsiders account took part in much of the same activity, trying to take control of more popular accounts in search of followers and revenue.  Enter @NFL_Memes, a successful parody account of over 150,000 Twitter followers and almost 700,000 Facebook likes.  The Insiders account tried to subvert NFL Memes, but this story is unique in this regard – they tried to impersonate the NFL to do it.

@NFLInsiders reached out to multiple Twitter accounts including @NFL_Memes, @NotSportsCenter, and others posing as an official league account.  In trying to get accounts with many more followers to sign up for a fake internship, @NFLInsiders was hoping to phish passwords and then steal these more popular accounts for their own use.

You can view the entire e-mail exchange between @NFLInsiders and @NFL_Memes that shows the extent of the scheme at this link.

In the e-mails, Insiders posed as "A National Football League Property" and offered @NFL_Memes control of their account with the potential for becoming an intern for the league if all went well.  The fake account tried to sell NFL Memes on the idea that @NFLInsiders would become a mixture of official league content and more non-traditional material.  If the people behind NFL Memes were able to make NFL Insiders a success, it could lead to a potential job with the league, certainly an attractive prospect.  Insiders even provided a name and title for the NFL employee behind the account to add legitimacy: Dean Soloman, Director of Human Resources – New Media.

The NFL confirmed in a statement to Awful Announcing that @NFLInsiders was not affiliated with the NFL and there is no Dean Soloman that works for the league.

The @NFLInsiders scheme quickly fell apart once @NFL_Memes figured out it was a scam.  To be honest, it wasn't quite a plot dripping with genius from the beginning.  Anyone could merely google "Dean Soloman NFL Director of Human Resources" and realize no such person existed.

It seems like a rudimentary plan, but keep in mind that @NFLInsiders had grown to 20,000 followers and was continually tweeting links from NFL.com.  On Twitter, followers equals legitimacy and in the world of anonymous accounts, many times follower counts are all that the individuals behind them have to go on in making decisions.  Who was really behind the @NFLInsiders account?  Was it a rogue indiviual looking for a quick buck and some cheap entertainment or someone with a network of popular accounts looking to exploit the NFL to secure another foothold in the space to increase revenue?  It's impossible to prove at this point.

Trying to steal entire Twitter accounts is far from the only issue in this largely anonymous realm of the Twitterverse.  In the massive network of imitation and parody accounts, various material including entire tweets, jokes, memes, and pictures are stolen from one another at an alarming rate.  There are many accounts and individuals that are doing this anonymous work on their own to entertain and are doing so above board.  However, there are some that see an opportunity in this realm to use and corrupt the system to their advantage and cross ethical boundaries.  There are some that strive to do what humankind has done for centuries – build some kind of empire.

The nature of Twitter allows for terrific content at nearly every level of consumption imaginable.  The inherent nature of the social media platform also allows for stories like this, moderately successful accounts portraying a relationship with the NFL, phishing for passwords to control other users, and then mysteriously vanishing without a trace, to happen much more frequently.