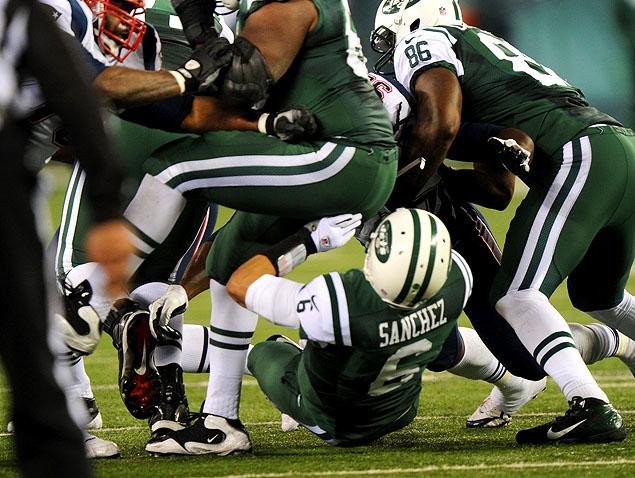 The sucktitude of the New York Jets is officially driving everyone insane.  The way this three ring circus of a professional football team holds everyone captive with its crappiness is one of the most wondrous things in all of sports.  Our collective obsession with the Jets is one thing, but now it's beginning to have an effect on the sanity of people other than Rex Ryan.

First it was Governor Chris Christie engaging in a grade school name calling contest with the New York Daily News and beat writer Manish Mehta.  Now it's Jason La Canfora of CBS in a feisty Twitter War with Bart Hubbuch of the New York Post over the state of the local New York media.

Neither of these NFL scribes are strangers to skirmishes in social media.  Hubbuch likes to mix it up on Twitter, especially with Jaguars fans for some reason.  La Canfora has traded barbs with Mike Florio and others in the past as well.  These two stepping into the squared circle against each other was, to borrow a phrase, always going to be a slobberknocker.

It all started with a La Canfora column about the controversy surrounding Mark Sanchez getting hurt last week and the New York media's preseason thirst for Rex Ryan's blood.  La Canfora blasted the local media for their faux outrage over Sanchez's minor injury and suddenly believing he was the answer to all the Jets' woes after being the problem for so long.

After drawing straws in the break room at the Jets complex, the job fell to Hubbuch to defend the honor of the New York media against La Canfora in a Gotham street fight.  Get your popcorn ready, let's play the feud!

CAN'T WE GIVE PEACE A CHANCE!

If only Fireman Ed could come back to lead us in a singing of kumbayah and stop the madness.

That was delightfully catty.  There's nothing like a Twitter fight between sportswriters when the term "tough guy" is thrown around pejoratively.  This closely resembles the fight I saw on Total Divas this week come to think of it.

The fight centers around one thing – a local writer defending his turf against the national guy.  Hubbuch has every right to do so and he starts ironically enough by throwing Mehta under the bus (although he's probably used to that by now).  He then starts lobbing grenades at La Canfora's ethics and bringing up the CBS man's reporting misfires.  Hubbuch accuses him of trying to get in the GM's good graces and playing the good cop to the scary local media's bad cop.

Not to be outdone, La Canfora landed the best shot of the fracas with his "Papa Murdoch" line and went after not just Hubbuch, but the entirety of the New York Post and its tabloid journalism.  And that quip about "graduating to the back page"?  Cold.  That led to the fantastic exchange of La Canfora and Hubbuch calling each other unprofessional in a Twitter fight for all the world to see.  We're just dripping with irony at this stage, folks.

I also enjoyed La Canfora's "time to slap you around some more" haymaker.  Too often ego gets in the way and a huge miscalculation is made by accusing the opponent of being immature and childish while forgetting that you're in a silly Twitter War.  (After all, that's what cost Michael Kay in his loss versus some random kid.)  Here, La Canfora embraces the ridiculousness of it all and asks for more like he's hulking up before ending the fight on his terms.

Without a definitive knockout blow, this one's going to the scorecards.  Hubbuch landed some decent shots, but La Canfora was the one on the front foot more often.  Even though Hubbuch started this fight, La Canfora was more aggressive and effectively finished it.  Your winner by a unanimous decision – Jason La Canfora.  Now he gets to level up and face Rich Cimini.