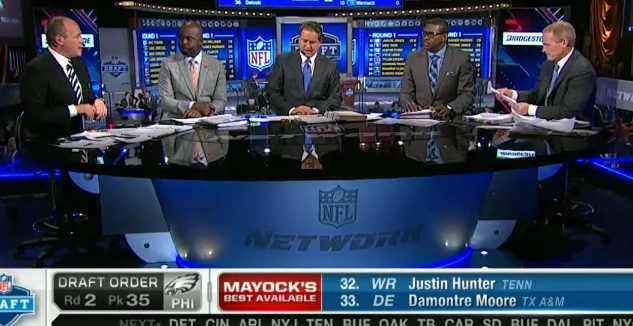 Mayock's analysis has always been top-notch, but he seems to be getting better at prognosticating the picks every year. He was predicting everything Thursday night, with the highlight coming when everyone figured the Vikings had jumped back into Round 1 to take Manti Te'o. Mayock was pretty damn certain Minnesota's pick would be Cordarrelle Patterson, and he nailed it. Mayock just blows everyone else at that desk away and continues to show why he's now the most trusted NFL Draft expert.

Eisen is one of the best sports hosts in the country, period. He's not in his element as much during the draft, because it's really the Mike Mayock Show and he can't be the star of the set, but he accepts that and still does an exceptional job year after year. He makes some of the same lame, goofy observations that Chris Berman makes, but he somehow pulls them off in a way that doesn't cause me to shake my head. On Thursday night, he was on the ball as always with his sharp observations about things that don't matter, such as the "run on DJs" we had with the 11th and 12th pick and the fact the Texans "got a DeAndre to go with their Andre." He was again smooth, funny and insightful, and he was rarely annoying. Can't ask for much more than that from a host.

Faulk's logical and he's good at summing things up and finding the key points to cover. While Michael Irvin is usually lost, Faulk is often on the ball. I don't know how well he knows the players, but he knows the NFL teams so well that he's able to connect dots quickly. He's also becoming more comfortable making big statements. His analysis of the Jets' Dee Milliner pick was the best moment of his night. Faulk suggested that bringing in Milliner right after trading Darrelle Revis could be a move that could severely damage Milliner's career. He also checks his ego at the door and is very likable on camera.

I watched carefully as Jeremiah sat at the main anchor desk up until 7 p.m. ET, because it's his first draft since leaving the scouting world and joining NFL.com and NFL Network and I was very impressed. The guy just knows his stuff when it comes to both the teams and the players. Nobody has the overall knowledge he does, save for Mayock. Then he was relegated to the insider desk in the pit with Ian Rapoport and we heard him say about 12 words during the actual draft. I can't even tell you how much better the broadcast could be with Jeremiah sitting in Irvin's chair. I don't understand how the network execs don't see that. Hopefully he gets moved to the main set soon.

As I mentioned above, they barely go to that insider desk in the pit. The fact that they're not tipping picks anymore has rendered guys like Rapoport and Adam Schefter pretty much useless on draft night. But I've got no problem with Rapoport on air, which is why he gets a slightly above average grade.

Mooch continues to be everyone's favorite football-analyzing uncle. He's goofy but has the ability to make you laugh once in a while. His analysis is decent enough, but he takes a back seat to everyone on set except Irvin. I hate to say this, because I do like Mariucci, but Brian Billick is much better. Too bad he doesn't have the seniority, or whatever, because he was booted off the anchor desk at 7 p.m. ET, never to be seen again for the remainder of the night.

I can actually tolerate Sanders in the "reporter" role because it's pure fluff. He doesn't have to convince us that he's done any preparation because it isn't required. He just stands there and sucks up to a bunch of guys he wishes he could still be like, asking different variations of the world-famous "How does it feel?" cliché. I tend to ignore those bravado-riddled interviews anyway, but I will give Deion credit for doing a good job with E.J. Manuel when Manuel became extremely emotional. He also did a good job getting to the point and handling Luke Joeckel and Eric Fisher at the same time in the green room just prior to the start of the draft.

Where do I begin? Underprepared. Not well spoken. Settles into clichés constantly. As far as sports television goes, Irvin is an undrafted free agent and Mayock is a first-round pick. It's sad to see them sitting next to each other. You forget he's there until he suddenly seems to realize he's not adding anything to the conversation and pipes in with the sort of generic statement that your aunt could have made 30 seconds prior at home. It's funny, because Mayock treats him like a child. They came back from break just before the eighth pick and Mayock went out of his way to give Irvin a chance to elaborate on a point he made while they were at commercial. Irvin responded by stumbling over himself, never getting around to the actual point before deferring back to Mayock, who had no time to clarify before they had to throw it to the commissioner for the next pick. If not for his half-decent ability to break down receivers and make comparisons to guys who played for the Cowboys in the 1990s, Irvin would add absolutely nothing to the draft broadcast.

ESPN is still better than NFL Network at the fancy non-football stuff. NFLN sent Flanagan to Hawaii, where she stood on some rocky cliff-like thing overlooking the ocean and kept telling us that Manti Te'o was at a secret location. You're telling me you traveled 2,500 miles from Los Angeles to Hawaii and couldn't manage to finagle your way into that family draft party? Then there was the cheesy, over the top feature story on Te'o, which did absolutely nothing to add to an already overexposed storyline. Nothing original, nothing off the beaten path. Where's the special access? Where's the ROI on a trip halfway across the Pacific? ESPN has the personnel for assignments like those, but NFLN doesn't.

Where the hell was he?

Overall, NFL Network continues to do a fantastic job with the draft. I think a lot of people watch ESPN out of habit, but there's no doubt that these guys have better hosts and analysts. Eisen and Mayock in particular are clearly the best at what they do. As a whole, NFL Network was on their game last night, with few awkward moments and mistakes.