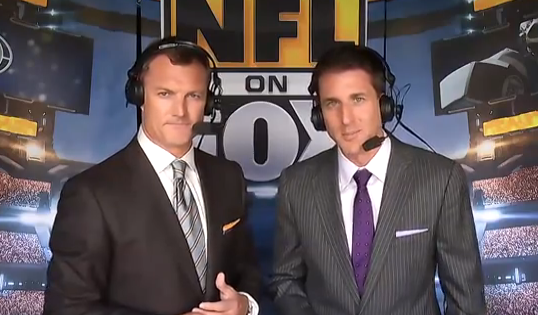 Just days before he calls what will certainly be the most-watched game of his broadcasting career, rookie NFL on Fox play-by-play man Kevin Burkhardt admits he's a little stressed out. But the stress isn't nerve-related. It's sinus-related.

Burkhardt says he's not nervous at all to call Saturday's divisional playoff game between the New Orleans Saints and the Seattle Seahawks. He has a routine now — one that involves meticulous preparation, 5-Hour Energy and pregame fist-bumps with broadcast partner John Lynch — which is why he isn't concerned about anything beyond butterflies in the nerve department.

"It's just experience," Burkhardt told Awful Announcing on Tuesday. "The more you do, the more calm you get."

But Burkhardt woke up Sunday with a cold and is now fighting a sinus infection.

"I woke up Sunday and I couldn't breathe," he said. "I was like, 'C'mon, not this week!' I'm trying not to talk too much, and the doctor got me some good stuff. I'll be fine by then, but that's the last thing I wanted to feel when I woke up on Sunday, believe me."

Awful Announcing first reported in December that Burkhardt, Lynch and Erin Andrews would work their first playoff game as — basically — a playoff "B crew." Joe Buck, Troy Aikman and Pam Oliver still lead the pack, but Fox has tinkered with that second divisional playoff crew of late. Kenny Albert, Daryl Johnston and Tony Siragusa were benched last year in favor of Thom Brennaman and Brian Billick — Johnston told us in February he was "not happy" with that decision — but now they've really broken from the presumed hierarchy by giving Burkhardt and Lynch a shot.

A year ago, Burkhardt had never called an NFL game on network television and wasn't known nationally. A decade ago, he was working as a car salesman. Now, he's only a slot removed from Buck. How'd it happen?

It was simple, really. Fox Sports executive producer John Entz and vice president of production Jacob Ullman called the crew up and told them they had earned the chance.

"You guys have had a good year, you guys have been a good listen," Burkhardt was told. "You guys are having fun and I think it comes across. Keep doing what you're doing."

"We get compliments and critiques every week," Burkhardt said. "They're good about that. They kind of have people watch the games and they tell you what they thought worked and what they thought didn't, and it's very helpful."

You also have to wonder if the 39-year-old's humility and his willingness to listen to the critics has helped him rise up. He admits he reads what people like us write about him — not all of it, but some of it — and that might have helped him evolve quickly as a broadcaster.

"I think people don't want to admit they see it," he said, "but they see it. I think everyone wants to be liked. But at the same time, if somebody doesn't like me there's nothing I can do about that. That's gonna come with the territory."

Burkhardt said that came in handy when he was calling an Arizona Cardinals-San Francisco 49ers game in the Bay Area in October. He checked his Twitter during a commercial break and noticed that locals were taking umbrage with the fact he was referring to their city as "San Fran." He adjusted on the fly and stopped using that short form.

This game will also be unique for Burkhardt because it'll be the first non-Sunday game of his career at Fox. He says he's routine-oriented and has to cram more work into a smaller window this week. When we spoke with him, he had been at his computer studying since he woke up and planned to stay there until the wee hours of the night, save for some breaks to spend time with his 7-year-old son.

The good news is he should be well prepared regardless. Burkhardt did three Seattle games and two New Orleans games this season and he says he's watched several more. So long as his sinuses are clear and there isn't a 5-Hour Energy shortage in Seattle, expect another smooth broadcast Saturday afternoon as the rising broadcast voice introduces himself to his biggest audience yet.