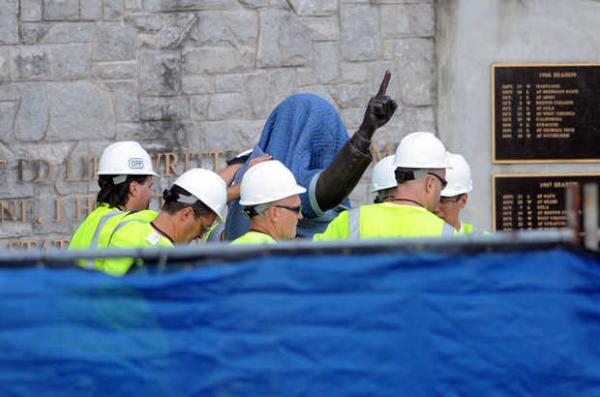 The Associated Press' annual poll of U.S. editors and news directors on the top 10 sports stories of 2012 was released this week, and as in the  2011 edition, Penn State tops the results. Here's the full list:

What's perhaps most remarkable is that not only did the AP poll voters choose the same top story for 2012 as they did for 2011 (the first time that's happened dating back to the poll's 1990 inception), but also that it's almost impossible to dispute their choice: the Jerry Sandusky scandal at Penn State. The story hasn't actually dominated the news cycle for two complete years, as it broke nationwide in November 2011 and faded a little following Sandusky's conviction in June 2012, but it clearly was the most wide-reaching sports story in both 2011 and 2012, and its implications are still being felt.

Consider Sports Illustrated's December cover story by Gary Smith on how speaking out about the sexual abuse they suffered affected R.A. Dickey and Kayla Harrison; neither's a football player and neither had Penn State ties, but Smith mentions the Sandusky case and its impact on how we think about sexual abuse in his fifth paragraph, and later in the story, includes how the Sandusky saga impacted Dickey and Harrison. For both, it played an important role in their decision to share their story with a wide audience, and they're only a few of the athletes who have come forward in the wake of the Sandusky scandal.

That's only one element of the story, too; the Penn State story also carried major implications for how we think about revering coaches, and it had significant on-field consquences given the NCAA sanctions and many players' decisions to transfer.  The Penn State/Sandusky saga had a huge impact in the media realm in 2012 as well, from CBS' errant report of Joe Paterno's death to the questions about Joe Posnanski's book on Paterno to ESPN's questionable decision to have Matt Millen featured front and centre in their coverage of the Freeh Report. It wasn't an easy story for media outlets to cover, but it was clearly the most important sports story of 2012.

What else the voters got right:

The picks of NFL bounties and football concussions at #3 and #4 seem particularly strong. Both of those stories have been ongoing throughout the year and have so many different elements involved. The amount of concussion litigation that's popped up this year, with thousands of former players suing the NFL, is particularly notable; concussions are only going to become an even larger part of the sports discussion going forward. BountyGate itself didn't necessarily have to become a huge deal, especially given the amount of hyperbole in the initial details and coverage, but the NFL's overreaching response, the bizarre side stories (Warren Sapp and snitches! Mickey Loomis and wiretapping probes!), the impact of the suspensions handed out, the questions raised about commissioner Roger Goodell's handling of the situation, and former commissioner Paul Tagliabue's eventual decision to vacate the penalties handed out to players made this a year-long story that was covered everywhere and deserving of plenty of coverage. Another nice inclusion here is Tennessee women's basketball coach Pat Summitt's retirement; #9 seems about right, as NCAA women's basketball is far from top of mind for most, but Summitt's impact on women's sports as a whole was incredible and her decision to take her struggle with Alzheimer's public was worthy of plenty of attention.

Putting the shift to a college football playoff system at #6 seems too low from this corner. This is a seismic change in the college football landscape, one that's been lobbied for unceasingly for years and one that's not only fueled plenty of past conference realignment (the #4 story in this poll last year), but is still causing conference upheaval and will be likely doing so for years to come. Moreover, it's been an ongoing story: from the controversial LSU-Alabama rematch in the January title game to the continuing debate about just how playoff teams will be selected and if the playoffs will stop at four teams or inevitably expand down the road. Yes, college football isn't huge in every market, but on a national scale, it's very significant and this is a story that's going to alter it forever.

Ranking the NFL's replacement refs at #7 also seems low. Coverage of the league's dispute with the officials' union started long before the season and the eventual debacle in Seattle not only led to ESPN's most-watched SportsCenter ever (despite it airing from 12-1:30 a.m. Eastern!), but also produced one of the most significant losses for the NFL in a negotiation in decades. The replacement refs saga shows that "The Shield" is no longer as invulnerable or as unquestionably dominant as it once was, and that football fans won't just meekly take whatever the NFL decides to give them. That's bigger than a #7 story.

Yes, it's notable that Lance Armstrong finally gave up his fight against the USADA's doping charges, but is that really the second-biggest story of 2012? Most of the important news about Armstrong happened long before this year, and while this decision led to his seven Tour de France titles being officially stripped, it probably didn't actually change many minds on the question of whether he's a hero, a villain or somewhere in between. The Armstrong story's also in a sport that's barely on the North American radar these days, and while it received plenty of coverage when it happened, the coverage didn't last all that long. The Armstrong story deserves to be on this list, but not this high. The stories ranked three through six (NFL bounties, football concussions, the Olympics and the college football playoffs) all received both more peak coverage and longer-lasting coverage, and deservingly so.

There aren't too many big stories missed here. One that comes to mind is the NHL lockout, but although that has a huge impact in some areas, ESPN executive Vince Doria's easily-mockable May comments that the NHL "doesn’t transfer much to…a national discussion" in the U.S. aren't entirely wrong. Just look at Bill Simmons' tweets to see how little national play much of the U.S. hockey coverage gets. (It's obviously rather different in Canada, where the lockout topped The Canadian Press' similar poll of the top 10 stories.) You can make a case that the lockout should bump one of the lower stories here, but although it may be more significant for many, it's hard to argue that the NHL lockout's been more notable across the U.S. than even the state of Peyton Manning's neck.