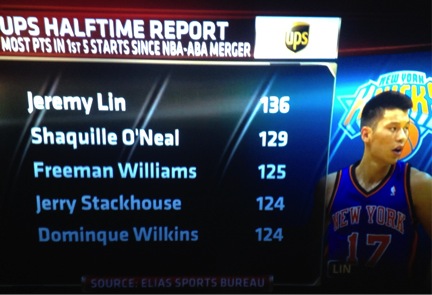 Since the NBA/ABA merger, no player has had a better beginning to his NBA career as a starter than Jeremy Lin.

Subtract out his ethnicity, the fact the Knicks are undefeated in that stretch with a depleted team, that he wasn’t offered a scholarship out of high school, that he went to to Harvard, and was as fringe as you could be in the NBA. Even without all those crazy storylines, the fact Lin sits atop that list is insane. (I’m not even going to grab the low hanging fruit of calling it Linsane.)

Even if Lin was the top pick of the draft, his run would be a major story and last night’s better than Hollywood ending only perpetuates what continues to be one the most remarkable sports stories in recent history.

Regardless, there is a bit of an ominous feeling in the air as skepticism, disbelief, and enthusiastic dissenters of anything and everything seem to be waiting for the bubble to pop.

ESPN and others have covered the initial shock of Linsanity well, but looking to feed the wide spectrum of ESPN platforms with fodder sure to drive up page views, ratings, and fan interest, Lin has now become the target of ESPN producers as the topic du jour. Lin is on SportsCenter, Mike & Mike, SportsNation, First Take, The Herd, ESPNEWS, Numbers Never Lie, PTI, Around The Horn, and everywhere in between. ESPN’s well orchestrated content farm is such overkill to many fans that it may turn people against Linsanity within the next two weeks. Just examine all the “tired of Linsanity” tweets already emerging. 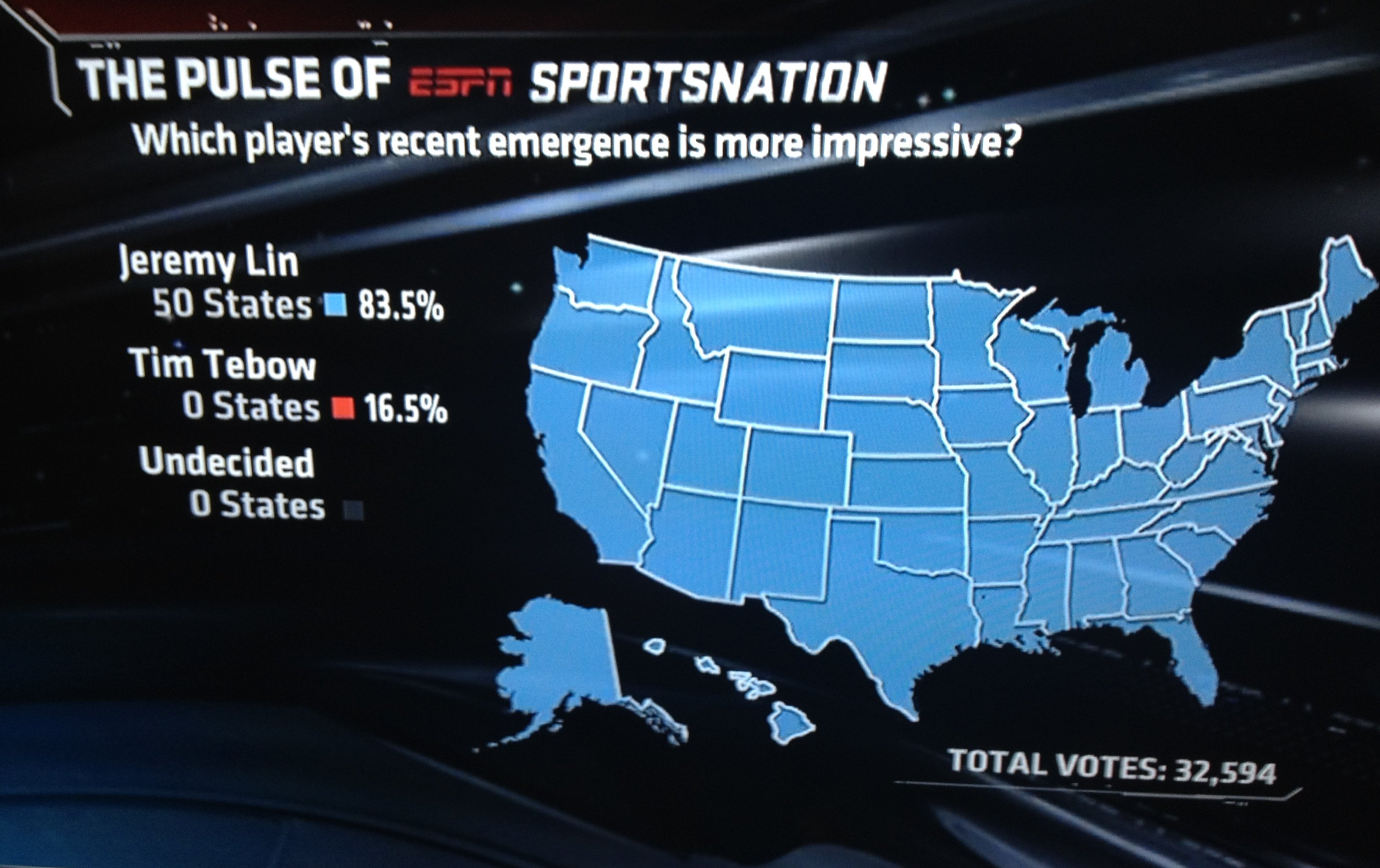 This ESPN poll is one of hundreds of ways of framing a conversation, debate, or opinion on Jeremy Lin by somehow bending logic and connecting him to Tim Tebow. Per the SportsNation poll, there isn’t a state dumb enough in this country that thinks Tebow’s emergence is more impressive than Lin’s. Even Colorado and Florida fell in line and the ratio across the board was 5:1.

Lin has more points as a starter five games in than any player at any position in the NBA in the last 35+ years. Tim Tebow ranked 28th in paser rating… last year. The continued attachment of Jeremy Lin to Tim Tebow is just self serving hype and debate fluff. They are nowhere close to being the same story as Matt said earlier this week. It’s not exactly comparing apples to apples but more like an apple to an Apple iPhone.

If you could put a dollar number in terms of how much ESPN gained from the endless cycle of Tebow hype, debate, skeptical take-downs, rinse and repeat, who knows what the shiny number would be. For months on end and even still, ESPN puts this played out song on repeat as the offseason gives them a nice “To Be Continued” drama to continue the 24/7 talk.

With Linsanity spreading exponentially, there are plenty of fans thinking “here we go again” in terms of another story you will eventually want to run and hide from. After being drained by Tebowmania and all the false hype associated with it, there are already large numbers of people who want to ignore the Lin story or discredit it. Lin’s gaudy numbers can likely only go down long-term, but I don’t think it’s a stretch to say that he very well may have a long, successful NBA career averaging around 15 points and 7 or so assists per game. But, the only thing more enjoyable to the media than building up the mythical nature of Jeremy Lin will be tearing him down when he takes his first missteps. Soon, we’ll be waiting for him to fail and believing that the endless talk of Linsanity was always more hype than substance.

If ESPN and others want to fully run with the remarkableness of this story, the puppeteers of false hype and manufactured debate would be wise to just ease off the gas on this topic. Whether that be attaching Lin’s name to Tebow, asking if he’s the best point guard in the NBA right now, or if he’ll win the league’s MVP and win not one, not two, not three… championships. Those are the examples of crazy debate topics and frivolous questions flooding the sports media that will cause a great story to turn sour quickly.

When dealing with Lin’s rise from obscurity, the quote that comes to mind is one from the movie Friday Night Lights when the star player, Boobie Miles, is asked if he believes the hype.

He answers by saying “What Hype?” to which the reporter responds “The Hype About Boobie Miles?”

Miles replies, “Now hype is something that’s not for real. I’m all real,” and puts the conversation to an end.

The modest Lin would never say a such thing. To this point though, he seems to be all real and hopefully the 24/7 media cycle won’t turn Jeremy Lin into merely “The Hype About Jeremy Lin.”