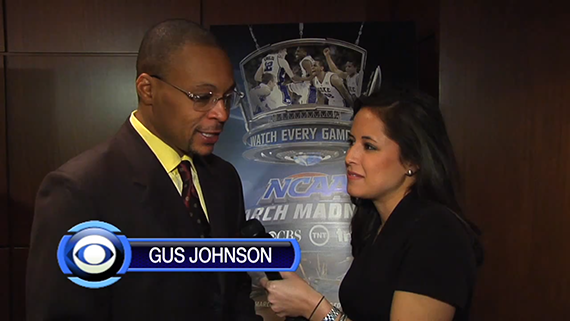 I’m guessing many of you were too busy “celebrating” St. Patrick’s day or perhaps having a stroke rooting on your alma mater in the tournament to notice that a lot of the chatter on the web and on Twitter in regards to the tournament was Gus Johnson related.

Other than a new record amount of Schadenfreude due to Duke’s unexpected loss, the next most universal topic was various commentary about the Madness without Johnson. Since his move to Fox, there has been a lot of back and forth on if he was overrated or perhaps undervalued as CBS didn’t seem to blink twice in letting him leave.

Unfortunately, Fox seemed to skimp on giving him NFL assignments on top of his full slate of college football games. Although there are some perks to Johnson’s new role at Fox, for many sports fans he has disappeared as college basketball telecasts on network television and regular NFL assignments are no longer part of Johnson’s scope at Fox.

In many ways, the backlash at Johnson felt like the cool kids hopping off the now popular bandwagon as liking something mainstream is just a mortal sin in being super duper cool. That said, Johnson does certainly have a schtick and is an acquired taste so a lot of the criticism is genuine and well thought out.

All that said, March Madness without him felt wrong. One of my sporting favorite events, one that really sells itself, I didn’t think I’d suffer from Gus Johnson withdrawal. CBS and Turner have a solid arsenal of announcers and I just didn’t think the tourney needed the additional Gus Johnson sizzle to make it pop.

As the first two rounds of games wound down (notice how I don’t count four play-in games where 85% of the tournament field doesn’t participate as the “first round”), I found myself like many others sobered at the reality of the Madness without Johnson’s flair.

When you’re watching two teams you really don’t know well, don’t have a rooting interest in (no fantasy college basketball for most), and are iffy on your commitment to watch what will be one of many, many games in a day and weekend, Johnson’s compelling narrative has the transcending ability to command fan’s attention. He brings an intense sense of importance and significance to any competitive game winding down to an exciting finish.

The other announcing crews certainly do good work and at times have their moments, but I didn’t really find myself ever feeling as locked in to any game regardless of the situation. Essentially after every good game, I would say to myself “mmmm…. I’ve had better” and that seems to be the prevailing sentiment most fans had…

This led to a lot of discussion in various places including our Facebook page (that you should totally like), on how and when Johnson could return to CBS or Turner. While there are some long-shot scenarios that could lead to this, unfortunately as much as viewers want it, it’s just not in the cards anytime soon.

To understand why, you need to have a good understanding of why the two parties divorced last year. I took a shot in the dark as to what I thought was going on behind the scenes last year. If you don’t want to read that post, here is a summary of what my best guess is as to the discourse that led to the breakup.

Gus’s Agent:  So Gus’s contract as you know is up now. We’re looking for a nice raise and a bigger role within CBS Sports.

CBS: We LOVE Gus. More money is probably doable. A bigger role though? Not sure how much more we can throw at Gus right now.

Gus’s Agent:  Listen. Gus is the voice of Madden. He does the BW3 commercials. You see anyone else with their own soundboard, ring-tones, or Youtube compilation videos? He’s been patient, you can’t keep burying him over there. His following alone should dictate he climb the ladder now.

CBS: We get that but he needs to wait more. Nantz is and will always be our number one guy. Lundquist is a statesman, a fan favorite, and indispensable. Ian Eagle is a real pro’s pro and a good guy. He’s next in line for the big time, but we’re not there yet.

Gus’s Agent: Lundquist is getting old and Nantz doesn’t even really sink his teeth into college basketball. We’re going to look around. You should reconsider.

Gus’s Agent: We have a good offer from a competing network. We’re inclined to take it unless you can make some commitment to Gus for more meaningful assignments.

CBS: Has to be Fox as they’re just terrible right? Shit……… Unfortunately we can’t budge on this. I hope you reconsider. As I said we can certainly match the deal in terms of money.

Gus’s Agent: You’re making a mistake. You know you’re weaker without him. You really want to do this?

CBS: You’re the one walking away. It’s just the way it is. Please reconsider. We DO value him but our hands are tied.

The point of this conjecture and simplified breakup is that the way the breakup occurred almost guarantees that CBS and Johnson won’t reconcile, even as an annual rental for the tournament.

For Johnson, CBS is the entity that didn’t value him. Despite always being lower on the announcing totem pole there and building a feverish group of fans, CBS in the end didn’t really think it was significant enough to change their pecking order. All of the Gus Johnson hysteria was essentially dismissed as “good for you!” rather than used as datapoints to carve him out a bigger role.

CBS certainly does have a wealth of announcing talent and taking away major assignments from big time personalities has historically been messier than a frat house the morning after a party. They had a tough decision to make and they let Johnson walk away even though they wanted him and they knew viewers would miss him.

For CBS, Johnson is a guy they put on the map and helped put him in a place to get his gigs with BTN, BW3, and Madden. They gave him MMA and Boxing assignments on Showtime and didn’t check his unique style at any time. They wanted loyalty and patience and likely thought they had earned it and could have “bought” with a nice raise.

At the end of the day, both parties can say whatever the want but the breakup hurt and both need to move forward in classic “Just trying to move on” mode.

The idea that CBS will admit to Johnson, “We were wrong and we need you…. at least as a rental for March Madness”, just doesn’t jibe with how this unraveled. Even if they did, would Johnson take them up on it? Would Fox allow their big talent acquisition to appear on a signature event of a rival network?

At some point someone has to be the bigger man or someone has to play peacemaker. Both seem unlikely given the freshness of the wounds. Hopefully time will heal the damage and basketball fans will get the return of Gus to the NCAA Tournament in some way, but it’s not something that can be counted on.

Fow now and the foreseeable future, a best case scenario is Johnson doing the tourney on the radio with DialGlobal/Westwood One. Until then, we’ll leave you with this: