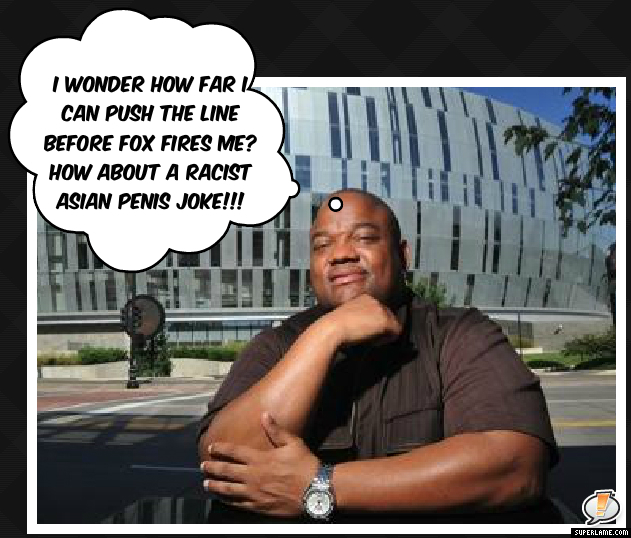 Update:  Whitlock has issued an apology after the Asian American Journalist Association called for one. Credit to Whitlock for not ignoring the controversy he created although we still don’t know what corporate politics, pr backlack, and pressure was potentially exerted to get this apology or if Whitlock was truly remorseful enough to backpedal.

Linsanity is a damn good story. You know the basics by now.

Jeremy Lin, a Bay Area product, California player of the year, and state champion, is not offered an athletic scholarship by a single program out of high school. He takes his game across the country to Harvard where he thrives for four straight years setting school and Ivy League records. He graduates with a degree in Economics with a 3.1 GPA.

Undrafted, Lin finds a home with his local team, the Warriors. He scores 76 points all of last season, a total he’s surpassed in just his last three games.

He’s waived by the Warriors before this season and not too long after, waived by the Rockets. The Knicks send him a lifeline but shortly thereafter send him down to the D-League where he impresses scoring a triple double. With a bevy of injuries that include Carmelo Anthony, Amare Stoudemire, and Baron Davis, Lin gets his shot. A month and a half after being without an employer, and a couple weeks removed from being in the D-League, he delivers with four massive games and four wins in a row.

Small sample size be damned, Lin’s four game average as a starter is 28.5 points per game and 8 assists. Did I mention the fact his four starts were all wins and they were without Melo and Stoudemire?

The media’s reaction to “Linsanity” has been one of mainly disbelief and support. Coming off the heels of Tebowmania, an endless cycle of analysis, debate, late game heroics, and flurries of horrific play, Linsanity has been a story of a different nature.

He’s not a Heisman winner or a first round draft pick who has had his merits debated endlessly for months. Linsanity is built purely upon the fact that he’s a true underdog and phenomenon. He’s an undrafted Asian-American perimeter player who hails from an Ivy League School and scored 38 points on national television against Kobe and the Lakers.

The clock hasn’t struck midnight yet and four games in, Linsanity is in full force. Fans and the media are eating up the story. Unlike Tebow, where the level of play was front and center for endless debate, Lin’s explosion on the NBA scene has been something that can’t be ignored, discounted, twisted, or even disliked. That is of course unless you are Jason Whitlock…

It’s just a joke and a tweet, but it goes out to nearly 120,000 people and its sender is one of the biggest personalities at Fox Sports.

I am also guessing that given the Knicks have a game tomorrow… in Minnesota, Lin won’t exactly be trolling the bar scene looking for a layup. I thought the whole point of the Lin story was that we liked him because he isn’t the typical jock?

I’m half Asian and honestly don’t really take anything too seriously in regards to off color remarks (although I wished Whitlock would have went with something involving slanted eyes or bad driving rather than attacking his manhood). I find almost anything funny and I can admit there is a sliver of humor here. However, it is not only racially insensitive but also unnecessary and not relevant.

How you go from a feel good story to this massive fail of a joke is bewildering to me. What’s the thought process here for Whitlock…

No apology yet from Whitlock, Fox Sports hasn’t replied to us or made a comment, and Lin hasn’t shared his thoughts on the matter either.

Why does Whitlock have to interject himself into what was a great story free of controversy, no less with a comment that is obviously going to cause a firestorm? He didn’t add to the story, he created a controversy rooted in insensitivity and racism that has quickly overshadowed what was one of the most universally easy stories to enjoy thus far in 2012.

People have been fired for far less and I have to say that I don’t think other media companies would blink twice at what to do here. However, this is Fox and they seem to have a history of longer leashes for their talent and more ambiguous editorial boundaries comparative to everyone else.

We’ll see what the fallout is but if Twitter is any indicator, it seems public opinion is that Whitlock needs to go… 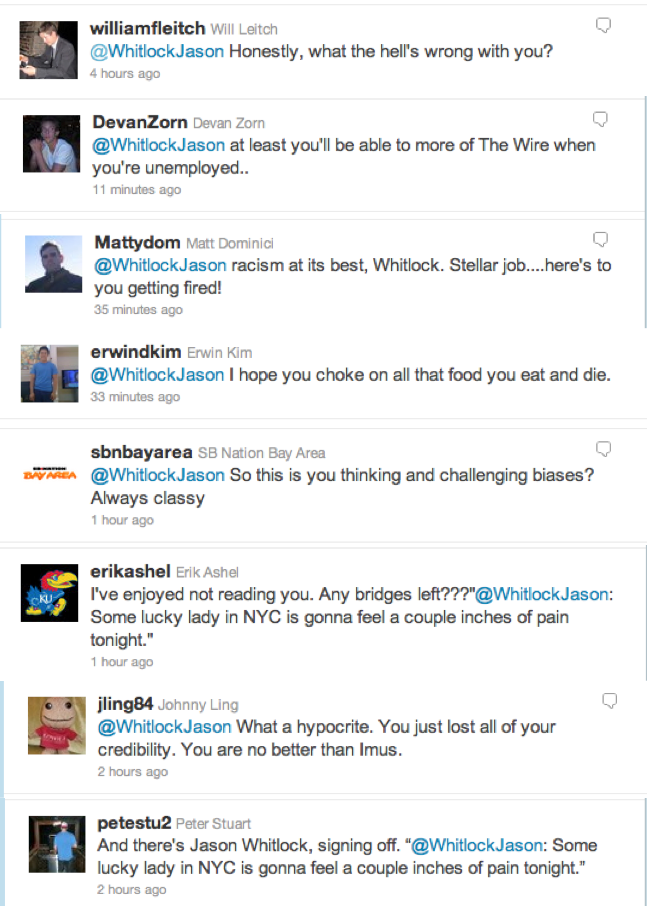 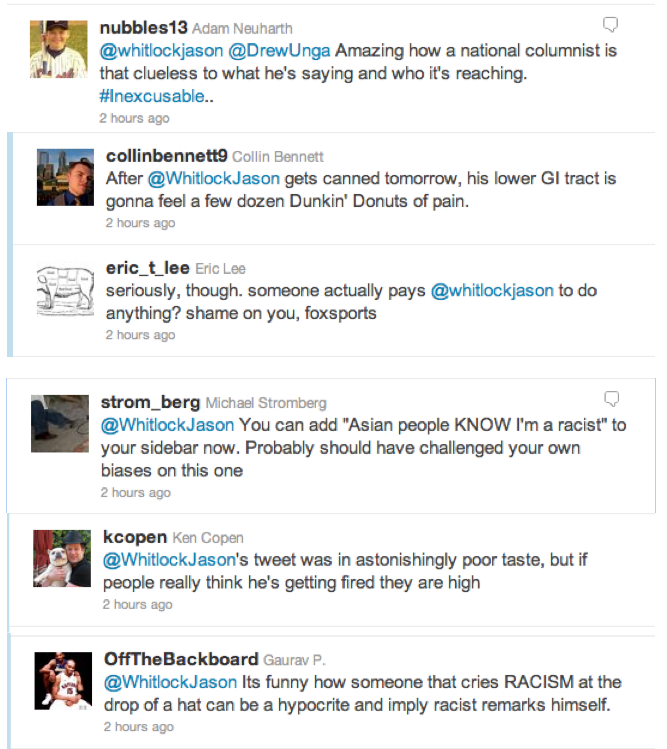 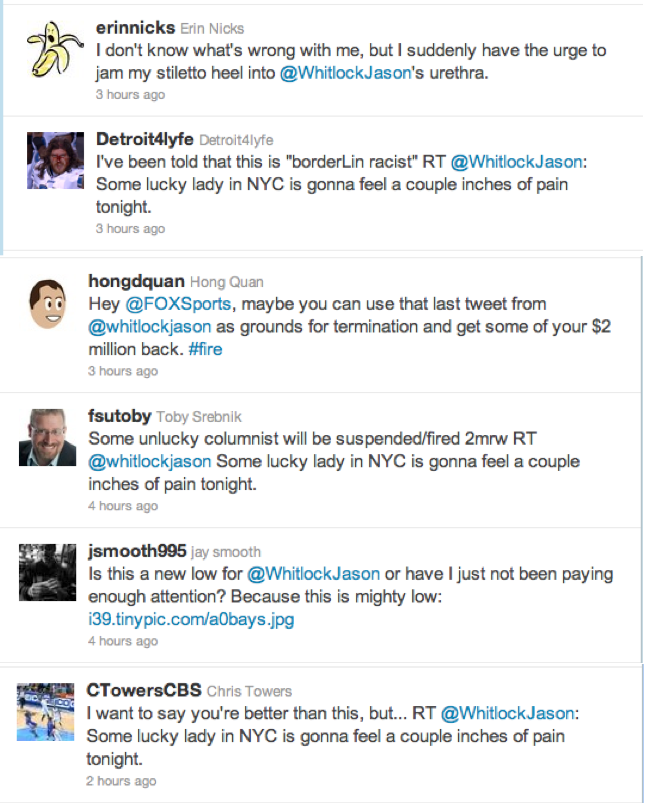 Will Fox go the Rush Limbaugh route and cut ties with Whitlock? My first thought is that they’ll likely try to quell the outrage with some canned PR statement and make Whitlock apologize. Will that be enough though?

Historically these things get complicated when activist groups get involved and decide to make something a cause – calls to action to the employer and their advertisers. At a certain point when the bottom line is being impacted and the media entity in question realizes the issue won’t go away and people are beginning to hold a grudge, the bait is cut and everyone in question can move on.

Given how much pride Asians are taking in Lin and how rare a story like this is in the community, I can foresee a long drawn out PR battle for Whitlock’s job.

Whitlock should go and go fast before this really spirals into a bigger story. My opinion is only partially due to the racial insensitivity and more based on the fact that Whitlock has become someone who craves being the center of the story and any media company worth a damn should realize he’s beginning to take extreme measures to make sure he is. When that happens, there really isn’t much you can do except say goodbye.