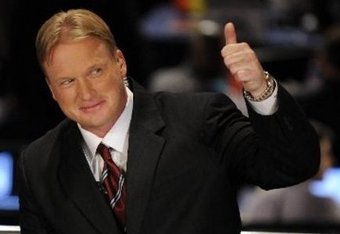 ESPN hired Jon Gruden in 2009 to replace Tony Kornheiser in the Monday Night Football booth.  Since that time, Bristol has stood behind Chucky as their next superstar analyst in a big way.  This year, Gruden's former partner Ron Jaworski was nudged back to the studio to make MNF Gruden's booth.  The former Raiders and Bucs coach has also called bowl games, appeared on the high-profile NFL Draft set, and hosted several of his own QB specials.  ESPN has invested more in Jon Gruden than arguably anyone else at the network in the past couple years, including Erin Andrews and Michelle Beadle, who both left this year.

A year ago, ESPN announced Jon Gruden was staying with the network and not returning to coaching for the next five years thanks to an exclusive contract extension:

Monday Night Football analyst Jon Gruden has agreed to an exclusive agreement with ESPN that will keep him on sports television’s signature series and out of coaching for the next five years. The new contract begins in September 2012.

In a recent interview with Real Sports though, Gruden sounds much less certain than his employer over that agreement saying while he's turned down several opportunities to get back into coaching, he would return under the right circumstances.  When pressed by Bryant Gumbel, Gruden said he would come back for the right opportunity via Tampa Bay Online:

"I don't know,'' Gruden said. "I'm trying to figure out where I'm going. If the right opportunity presents itself, I will come back.''

At the very least, there seems to be some murkiness regarding the fine details of Gruden's exclusive contract with ESPN and his desire and/or ability to return to coaching.  Coaching rumors have followed Gruden around non-stop since his arrival in the booth.  We asked ESPN about Gruden's Real Sports quote and the details of his contract situation.  While ESPN wouldn't comment on contract specifics, they did say Gruden has "made a long-term commitment to ESPN and we expect him to be a part of Monday Night Football for many years."

While Gruden isn't universally loved, I've thought highly of his work – especially at the draft and on his QB specials.  Gruden still has untapped potential in the booth and perhaps going solo on Monday Night Football will realize it more fully.  Chucky's long-term commitment to ESPN will always fall under question as long as there are jobs to be had and Gruden himself states his interest in returning to coaching.  Whatever this guy's future holds, let's just hope something like this doesn't happen again with another former coach turned ESPN analyst.