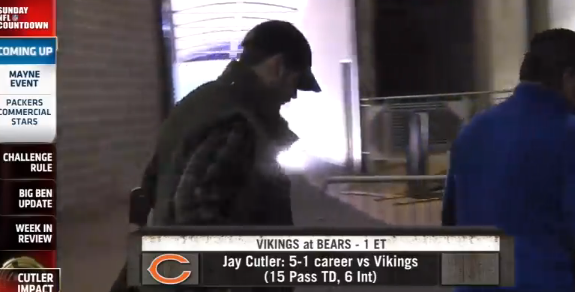 "It doesn't mean anything, it's just something."

Those were the actual words NFL Countdown's Tom Jackson used to describe his displeasure with Chicago Bears quarterback Jay Cutler walking into Soldier Field Sunday morning without appearing to talk to someone within ESPN's camera shot.  Jay Cutler has been criticized for a galaxy's worth of things in his career as an NFL quarterback, perhaps more than anyone else who has played the position in recent years.  But even for Cutler, being bashed for something as normal as silently walking into the stadium is new ground.

It was a throwaway shot.  A nothing moment.  And yet, Tom Jackson took six seconds of footage of Jay Cutler walking through the bowels of Soldier Field completely out of context to make a negative insinuation about his character.  Well, then again, Tom Jackson didn't really make any point at all as shown in the quote above.  The footage obviously didn't mean anything, except it meant something to Jackson.  Not even Confucius could attempt to rationalize that statement into a coherent thought.

How many times has ESPN used a player walking into a stadium as a screen filler on their pregame show?  Hundreds, if not thousands.  And yet, how many times has that moment been used as the impetus for criticism?  By my count one – Tom Jackson's incredulous disbelief of Jay Cutler not asking the security guard how his Thanksgiving dinner turned out.

Jackson's commentary was also a throwaway moment, but it brings to light a much larger point that needs to be made about the power of narrative.  As the 24/7 media cycle has taken hold in the last decade, "the narrative" has become its most significant force.

A simple narrative changes when you add the fancy quotes around it.  A narrative is merely telling a story about someone.  "The narrative" is the conventional wisdom about a person or entity that once established, cannot be changed.  Once "the narrative" attaches itself to you, whatever you do must fit that conception of you.  David Eckstein is scrappy.  DeMarcus Cousins is a loose cannon.  John Kerry is a flip flopper.  Etcetera and etcetera.

But what "the narrative" often produces is a narrative fallacy or illusory correlation, where we create our own story to fit around certain events.  (It's a Monday after a four day holiday weekend, so we might as well do some learning!)  In a sense, we see what we expect to see with this phenomenon.  Regardless of the actual facts, we place events into our predisposed judgment about that person whether those events truthfully fit or not.

This is what happened with Tom Jackson and Jay Cutler.

After sitting in the 2010 NFC Championship Game with a knee injury and frowning on the sidelines, "the narrative" took hold.  Just how powerful is the story attached to Jay Cutler?  Fox admitted to making up phony headlines last year to question Cutler's toughness.  Think about how low that is.  Earlier this year Cutler was destroyed for getting in the face of teammate J'Marcus Webb.  USA Today said Cutler "has been known to throw a tantrum or two and get a little whiny at times."  Please.  Had that been Tom Brady or Peyton Manning, he would have been showered with praise for showing tough love and leadership.  A camera shot catches Cutler swearing or sulking and he's immediately criticized because it fits the narrative of Cutler as a pouter.  A random quarterback with a more favorable narrative doing the exact same things at the exact same times would be cheered for showing his emotions on his sleeves.

"The narrative" on Jay Cutler is that he's a horrible person and teammate and lacks toughness.  The facts don't necessarily play that out.  Nevertheless, you're much more likely to see a ridiculous Cutler meme develop or jokes about his celebrity relationship instead of stories about his charity work in Kenya or what he actually means to the Bears.

So yesterday, it really wasn't a surprise to see Tom Jackson take advantage of a miniscule opening to rip Cutler for simply walking into a stadium without acting like he's running for public office.  It fit the Cutler narrative.  In truth, the power of "the narrative" needs to be held in check because it feeds on stereotypes, groupthink, and fallacies far too often.  Relying on narratives takes the easy way out instead of seeking truthful and fresh insights.  Relying on narratives leads someone to criticize a person for not walking into a stadium the right way.

I wonder if Tom Jackson caught Cutler tying Webb's shoe during Sunday's game.  Maybe that was just something that didn't mean anything too.