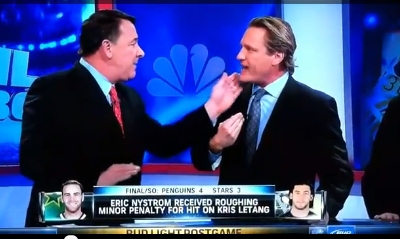 In what will likely set a new record of NHL related posts in a week, tonight’s totally awkward yet equally awesome on air argument between Jeremy Roenick and Mike Milbury is certainly an instant classic of sports media clips. Certainly not Hall of Fame worthy like Boom Goes The Dynamite, Joe Namath on the sauce, Jim Rome and Chris Jim Everett wrestling, and Brian Kenny destroying Floyd Mayweather, but it’s certainly a juicy war of words that seemed dangerously close to turning physical.

The contentious and lengthy argument revolves around Eric Nystrom’s really rough hit on Kris Letang seen below in a slowed down GIF courtesy of The Pens Blog. Letang would not return and is one of Pittsburgh’s best players.

This violent hit seems to have stirred a lively debate in the hockey world as Puck Daddy describes below:

“Some felt the Dallas Stars forward’s check was suspension-worthy and others felt he either didn’t hit Letang in the head or that Letang put himself in a prone position.“

When reached for comment, fellow Pittsburgh athlete and notorious hitter, James Harrison, offered up these comments through a representative.

All kidding aside, when NBC Sports Network pow wowed on the severity and repercussions of the hit, needless to say things got a bit heated as seen below.

When you see guys getting this emotional on live television disagreeing, you usually have a cool down period where you laugh off the tension or a third party quells the mood and moves the conversation forward and elsewhere. Not the case here.

Public sentiment thus far seems to favor Milbury over Roenick in this showdown, but what remains to be seen is if this type of attention is actually good for NBC Sports Network. Some bloggers were embarrassed that the discourse deteriorated to this level of machismo and name calling while others enjoyed the candid and spirited war of words between the two.

Competitive banter and overdone arguments certainly has become a staple over at ESPN and a successful one at that, but thus far it’s not really been something NBC has embraced as they’ve seem to want to differentiate away from ESPN’s go to ratings stimulant.

NBC, who has been pleading with the ratings gods for rain, now find themselves as a top story across the web. At the end of the day, it’s hard to tell that when the dust settles if the suits at NBC will smile or shake their heads at the contentious squabble.

I’m a bit torn here but ultimately think NBC and their hockey coverage probably benefit from the added pub. That said, the clip above doesn’t really scream on air chemistry and mutual respect, usually a key pillar in a top notch studio show.

I’ll leave it to you readers of AA: Good or bad for NBC? Thoughts on the hit? Should NBC revisit their on air talent lineup in the off-season?