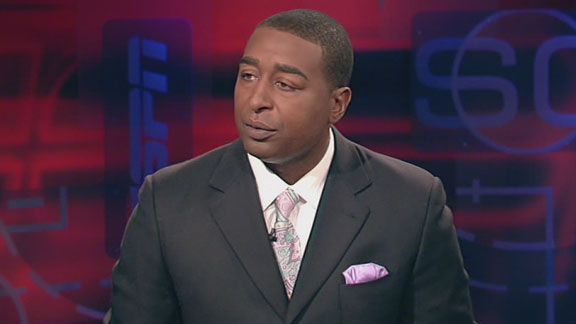 One day, I hope the word “bounties” will leave the headlines.  That day may not come for a long, long time though.  Saints players are appealing their suspensions and saying they are not guilty of what the league has charged.  Pressure has now turned to Roger Goodell and the NFL to show tangible proof of the bounty probe (better late than never I suppose).  And, former players and talking heads are still debating bounties.

One of those former players, ESPN’s Cris Carter, made a surprising admission on ESPN Radio’s nightime show Hill & Schlereth.  After swearing earlier in the day on Mike & Mike, CC must have felt like now was the time to be completely frank with the radio audience.  Out of the blue, Carter admitted to placing bounties on opposing players in his career.  Here’s the transcript via PFT…

“Protect me. . . .  Protect me from him. . . .  Especially if he’s playing a different position where I can’t protect myself,” Carter said.  “I’d tell one of them guards, ‘Hey man, this dude is after me, man.  Bill Romanowski.’  He told me he’s gonna me out before the game, in warmups.  No problem.  ‘I’m gonna end your career, Carter.’  No problem.  I put a little change on his head before the game.  Protect myself, protect my family.  That’s the league that I grew up in.”

You don’t hear too much about offensive players placing bounties, but if you believe it’s as big a part of the NFL culture as it seems, then it can’t come as a shocking revelation.  Carter’s words only serve to further prove the point that bounties may go well and beyond New Orleans and throughout the history of the league.  The question for Cris Carter is the timing and nature of his revelation.  To add to the intrigue and interesting timing of Carter’s admission, Romanowski said earlier today on the Dan Patrick Show that Carter made up the story of Romanowski saying he’d end his career during warmups.  Truly bizarre.

To be honest, a lot of the grandstanding and shock and horror over the fact that bounties existed in a violent sport since the story broke two months ago has been sensationalized.  And now, we have former players admitting to placing bounties while the current players being punished for it are suddenly protesting their innocence.  As the story has dragged on for months, it takes more headscratching turns where it’s getting harder to tell fiction from fact.