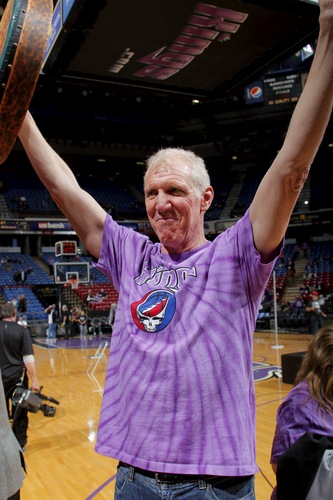 Bill Walton is one of my absolute favorite color commentators.  I know not everyone will share that opinion, but the big redhead’s presence in the booth is something to behold.  I always enjoyed his pairing way back in the day with Steve “Snapper” Jones and even watched him broadcast Clipper games with Ralph Lawler (and that was well before Blake Griffin).  Walton has had some very serious back and health problems the last couple years that have taken him away from national television, but thankfully he appears to be back in relatively good health.

Walton’s way with words are unique as they still have that tinge of the seventies, tie-dye t-shirts, and the Grateful Dead.  It’s always a Long, Strange Trip when you watch a Bill Walton broadcast.  There are things Bill says that make you shake your head, scratch your head, nod your head, and burst out laughing.  My favorite is the DRAMATICALLY EPIC OVERSTATEMENT said with just enough of a dry sarcasm that Bill knows he’s in on the joke.  All in all, it’s just fun to listen to Bill Walton do a basketball game.

So, when I heard Bill Walton was making an appearance in the Sacramento Kings TV booth alongside play by play man Grant Napear, I knew I had to tune in to enlighten the nation and the world with the wisdom of one Bill Walton…

One of my favorite Walton traits.  Throw random word combinations together like Jackson Pollack splashing paint on the canvas.  You know Bill Walton would crush you in Words With Friends.

via sharapovasthigh “NBA basketball is the ultimate celebration of health.”

This is coming from a man who has undergone at least 36 orthopedic surgeries and attended at least 650 Grateful Dead concerts.  Think about that.

“The best part about basketball competition is the mental and emotional aspects.  The physical levels are relatively equal… to be a champion, you’ve got to be the smartest guys on the floor.”

What other analyst in sports would talk about the mental and emotional aspects of the game?  The scariest part about this quote though is Bill was referencing mental virtuoso DeMarcus Cousins.

“If you just came back from the Mars Hotel and looked at Big Baby you’d say there’s no way this guy can be a successful player, but with his balance, ingenuity, his tenacity and his willingness to mix it up physically… he reminded me when he first joined the league of Charles Barkley, but he doesn’t have that lift that Barkley had.  Barkley was such a remarkable physical specimen, power, finesse and touch and anger and explosiveness.”

1) Rise up fellow Deadheads for the Mars Hotel reference!  2) I’ve never once thought of Big Baby and ingenuity in the same sentence, unless we’re talking about his arts and crafts collection.  3) Walton refers to Charles Barkley as a remarkable physical specimen, hard for anyone to fathom if you’ve seen this.

“The previous possession was a thing of beauty.  Picasso.  Monet.”

This was describing a Jason Thompson layup.  Really.

Bill just lost Tim McCarver with that one.

This quote came after Bill was informed of the Broncos defeating the Steelers in overtime.  Jimmer scored 2 points in 14 minutes, so I suppose if we’re talking about Week 17 Tebow this is an apt comparison.  And in fairness to Bill, they are indeed both players.

“You might want to tell Hedo Turkoglu that Tyreke Evans is righthanded and will continue to be so throughout the rest of this game at least.”

I stood and applauded at this quote.

“DeMarcus Cousins head to head here with Dwight Howard in the closing moments where legends are maintained or the course of history is changed!”

This is the greatest analysis in the history of western civilization!!  These Bill Walton quotes will change your life forever for the better!!  Throw it down big man, throw it down!!