Earlier this week we ran through the first half of our 10 sports media questions related to this upcoming football season. Below is the second half of various things we’re curious about as we slowly inch closer to the fall…

5) Will ESPN GamePlan Get An Overhaul?

Not too long ago ESPN GamePlan was a must for college football fans. Often you’d get stuck with lackluster games due to your geographic location while a clash of the titans took place forcing you to pay up for the package. However over the years, the package has lost almost all of its value.

The Big Ten Network, Fox, and now the Pac 12 Networks have entered the fray and have removed a lot of the surplus of games. Meanwhile, ESPNU and ESPN3 have become more prominent to consumers in addition to ESPN’s Goal Line package, which bounces around from game to game that you may be missing.

The package is still not offered in HD (IT’S 2012 DAMNIT!) so the games themselves look like a Youtube video circa 2005 on a big screen television. Many of the games are individually available as PPV options in addition to ESPN3.com and random channels thanks to syndication through Raycom.

I labeled the package as worthless back in September and there were some comments from former subscribers who also communicated that they no longer saw the need for it.

The demand for additional college football is certainly there. However with no HD, a drying up surplus of games, and no real tier one or tier two games on the package anymore, you have to wonder if ESPN will totally repackage this product as it has very little value and nowhere near where they price it at currently.

4) What To Expect From Pac 12 Network’s Rookie Campaign?

Rewind back to Big Ten Network’s launch in 2007. Thought to be a high risk/high reward venture, the network launched with little distribution to the dismay of Big Ten fans. Cable operators commented that nobody wanted to watch crappy games like Michigan vs. Appalachian State (the network’s first live game along with one other).

The Appalachian State upset along with improving lineups of games and solid production quality helped get the network over the hump. The rookie year was rough with the network stuck in carriage purgatory even through basketball season, but when the fall rolled around again, BTN was solidified as a long term viable entity and moneymaker.

Other conferences have used used the tactic of bluffing their own network over the years to leverage better television deals, but nobody has pulled the trigger on their own network until now. The Pac 12 will launch one national network and 6 regional networks, which a lot of folks are very suspect on as they’ll lack substantial sports content. In a way, it’s the next evolutionary step from BTN with the regionals providing that same risk/reward proposition.

The national network is already in a good place having worked out agreements with Time Warner, Comcast, Bright House, and Cox that will get them in 40 million households. That said, there has been little chatter on if DirectTV, Dish, Charter, and others will also offer the channel.

Carriage issues are to be expected, but more intrigue lies in who will be the on air talent for the networks? What original programming will they offer? What will the quality of the games be throughout the season and how accessible will highlights be?

Thus far the Pac 12 has shrewdly maneuvered to this point, so a lot of media folks are curious as to what to expect when the fall rolls around from their startup networks.

3) How Will MNF’S New Two Man Booth Go Over With Fans? 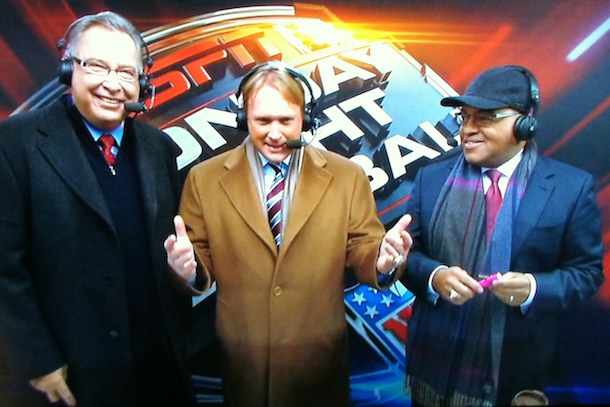 I can’t recall any sports property having as much discourse about its on air talent than Monday Night Football. I liked the Jaws, Gruden, Tirico booth but know many found it a bit too much. Jaws has now been moved to the studio, leaving Tirico and Gruden a whole lot of extra time to banter between plays.

I feel the subtraction of Jaws is a downgrade as both him and Gruden would keep their spirited tangents concise knowing that they had to split the blurbs of analysis between the two of them. Tirico did a good job keeping them from not straying too far.

Gruden is now going to be allowed to dive deeper into his musings (which may or may not be a good thing) and we’ll see Tirico expand his scope in the booth as well. While I think Tirico is a very polished and knowledgeable play by play guy, I think I’d much rather have Jaws in an overcrowded booth rather than giving Tirico and Gruden more room to verbally spread out.

That’s just my initial take as it’s quite possible the transition will be smooth and possibly an upgrade. Frankly, I’m more concerned about the quality of games the NFL is putting on Monday Night Football opposed to the broadcast talent.

2) How Will ESPN React To Playing Second Fiddle On Thursday Nights?

ESPN has perfected the art of promoting games they broadcast while also subtly ignoring or downplaying games that air on other networks. The NHL, UFC, SEC games on CBS, Big Ten Championship (both football and basketball), and The Cotton Bowl are all good examples of ESPN playing down any discussion of those properties on outlets like SportsCenter, Around The Horn, and PTI. But can and will ESPN give the same treatment to the NFL?

In previous years, there were only a handful of Thursday nights where both NFL Network and ESPN had a Thursday night game.  With ESPN being in 100 million households and NFL Network only being in 65 million, the ratings gap was usually pretty modest.

This year though, NFL Network could break 80 million households if the cards fall the right way and now they’ll be going head to head on almost twice the amount of Thursday nights.

This is kind of a new position for ESPN as they’ll be playing second fiddle to NFL Network. Their college football games on Thursday night will now match up with NFL games throughout the fall. Will the worldwide leader up the coy promotional activities for their college games while slowing down the touting of the NFL’s Thursday games? I am guessing ESPN won’t play favorites too much given the NFL beats all… but if a very weak NFL game falls on a night where they have a strong college game, you may see some promotional sorcery for the ages.

1) How Much Of A Changing Of The Guard Will We See With ESPN’s Core College Football Talent?

Are we at a changing of the guard for ESPN in regards to college football talent? Erin Andrews’ contract is up in the coming weeks with still no sign of her staying or going. Gameday’s Lee Corso isn’t getting any younger and neither is Lou Holtz, who is shall we say a very acquired taste as an analyst. Then there is Mark May and Matt Millen, who are as likely as anybody to take Craig James’ mantle of the analyst nobody seems to like. Speaking of The Pony, Craig James has already been shown the door opted to pursue his political ambitions, freeing us of his domineering presence this fall.

While some of these folks aren’t going anywhere this year, you have to wonder if this is the beginning of the end for this generation of talent. There is a pool of talent waiting in the wings and you’d think that Fox and the Pac 12 Networks may poach some talent leading to further turnover at ESPN.

We’re not talking a total Colts-like rebuild of course, but you may begin to see ESPN make some big changes this year or shortly after the season. We’ve given a big thumbs up to Jets third string QB, Greg McElroy, who has been tied to Bristol as a possible target. However, his awaited media career won’t begin until he’s done holding clipboards for Mark Sanchez and Tim Tebow.

Corso, Holtz, Andrews, and May are big time personalities with a lot of visibility and wouldn’t be easy to replace. ESPN does have Jenn Brown waiting in the wings should Andrews depart for greener pastures, but the depth in talent on the studio analyst side may be lacking. Should ESPN need to shuffle their talent lineup eventually, it would be interesting to see who gets promoted within or brought in from the outside to fill the void.

ESPN made a big splash with Urban Meyer’s hiring in 2011, but was burned badly when his tenure ended awkwardly as he had to deny the world’s worst kept secret with his hiring at Ohio State. Does ESPN learn from that situation or seek to add another big name this offseason to their college football coverage? Bristol could also move over one or two from their plethora of NFL analysts to fill a potential void as well.

Perhaps this changing of the guard is a couple years away, but with all of the moving parts, we may begin to see it in 2012 or shortly thereafter.

Thanks for stopping by as we pass the time until football season. Let us know your thoughts on the questions above and in part one of our series and share what other questions you may have.