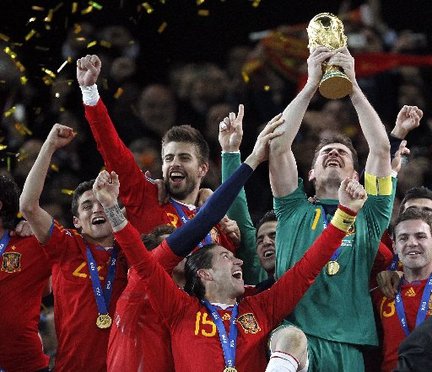 The next big TV rights deal on the horizon is for the 2018 and 2022 World Cups (you may remember them as the ones the USA got bribed beat out of hosting by Russia and Qatar) and other FIFA tournaments from 2015-2022.  Three networks – ESPN, Fox, and NBC are going to Zurich next week to FIFA headquarters to make bids for the package.  John Ourand of Sports Business Journal has more details:

“Given the growing popularity of soccer in the U.S., plus the skyrocketing cost of live sports, any new bid should see a healthy increase.  Once bids are submitted Oct. 19, FIFA is expected to decide whether to accept one of the bids later that week. FIFA could either accept one of the bids or go back to the networks if the bids are too close. ESPN, which has carried World Cup games in some fashion since ‘82, will be represented in Zurich by Exec VP/Content John Skipper and Senior VP/Programming & Global X Scott Guglielmino. Fox Sports is sending a small group led by Fox Soccer Exec VP & GM David Nathanson. NBC will send a delegation, but it’s not known who will be in it.”

Skipper is one of ESPN’s top executives and the driving force behind the comittment to the 2010 World Cup and ESPN’s overall growth in televised soccer.  One only has to look at the tripleheader of soccer yesterday to see ESPN’s continued focus.  Earlier this year, NBC snatched MLS and USA soccer rights from Fox to make their entry into the game.

Fox has started televising EPL games opposite NFL windows this fall and the numbers have been impressive, even on tape delay.  They took the Champions League away from ESPN as well, although their overall coverage on Fox and Fox Soccer lacks the depth and quality of ESPN.  NBC is still an unknown entity in the soccer field, but they obviously are very motivated to start acquiring games.  This FIFA package isn’t just the two World Cups, but Women’s WCs and plenty of live programming for an all sports network desperate for just that.  Other hypotheticals would certianly come into play including announcers Fox or NBC may tab if they win these rights.

I’d favor ESPN with about a 50% chance, NBC around 30% and Fox at 20%.  As a fan of soccer, part of me is keen to see ESPN hold onto World Cup rights and continue the growth in their coverage and in the sport as a whole.  ESPN’s decision to go all-in with their soccer coverage is possibly the best thing to happen for the sport in this country in the last decade.  With how much ESPN has poured into soccer over the last few years, it would be a major surprise to see them outbid for these tournaments, but I would expect both Fox and NBC to not go down without a fight.