Looking to continue the success of ESPN’s acclaimed “30 For 30” series, the WWL has released a Fall schedule of seven additional documentaries from ESPN Films.  If you’re anything like me, there were some “30 For 30” docs that you knew right away were must-see tv (Pony Express, The U), while some were just suspect (Marion Jones, Fernando Nation, etc).  The same looks to be true with the announcement of ESPN’s latest set of original documentaries.  Hey, if there’s anything I’m alright with making a premature judgement on, it’s movies and documentaries.  Let’s take a totally subjective look at the new “30 For 30” documentaries and gauge the watchability of each based on what we know so far… 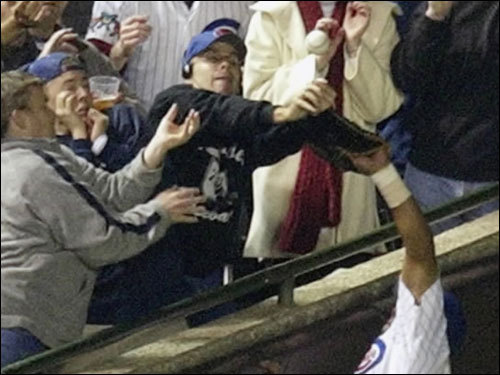 -The story of Steve Bartman and his fateful night in 2003 finally takes the small screen after many had suspected it would be part of the original 30 For 30.  Full disclosure, I am a Cubs fan, so I was very much looking forward to examining Bartman’s role in the famous Cubs collapse and how Cubs fans have treated him in the years since.  It seemed like the doc would be a healing experience for Cubs fans, examining their own shortcomings and exploring the unique connection between fan and team.

That is, until I read that director Alex Gibney was going to use part of the documentary to examine his own anger against Bill Buckner as a Red Sox fan.  GAG!  Typical ESPN to have a tie-in to one of their darling teams, the Red Sox.  I will be extremely disappointed if the Sawx take over this Cubs documentary.  If the Buckner aspect is minimized and well done, it could certainly add to the Bartman story, but knowing ESPN, I won’t hold my breath.

(2) Renee – Oct. 4
-This documentary examines the story of Renee Richards, a transgender tennis player in the 1970’s. Personally, this story just doesn’t appeal to me.  I’m certain ESPN will handle the matter gracefully and with care, but I’m just not that interested.  There’s way too much controversial subject matter for me to even attempt a lame joke at this stage, so let’s just move on, shall we?

Watchability Scale: Be my guest

(3) The Dotted Line – Oct. 11
-Director Morgan Spurlock of “Super Size Me” fame takes a look at two professional sports agents (Peter Greenberg and Eugene Lee).  Now, if I’d ever heard of the two agents being profiled, maybe I’d be more interested.  The only hook for me would be the intrepid Spurlock, or if he actually catches the agents breaking NCAA rules on camera.

(4) Unguarded – Oct. 18
-Chris Herren, a former high-school All-American, college basketball star, and NBA player, opens up about the affect alcohol and drugs has had on his life and career.  In fact, Bloguin’s own Aaron Torres had a podcast with Herren just a few weeks ago to discuss his book “Basketball Junkie.”  Also, ESPN’s “30 For 30” has seen success in looking at a similar situation with Len Bias’s tragic death.  Based on Herren’s candor and his new book, this doc could be quite the riveting experience.

Watchability Scale: Sure, has good potential 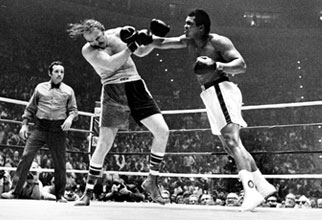 -Personally, I think this doc could be the sleeper of the bunch.  “The Real Rocky” will chronicle the profile Chuck Wepner, a boxer whose grit and determination actually inspired Sly Stallone to write Rocky after seeing “The Bayonne Bleeder” go 15 rounds with Muhammad Ali at the height of his prowess.  I can even remember seeing highlights of this fight years ago on ESPN Classic and being captivated by Wepner’s toughness and fortitude (although he also was rabbit-punching Ali for most of the fight).  Wepner’s later years haven’t exactly been storybook stuff though, he was arrested by the FBI in 2002 for forgery and has had drug problems.  If the whole story is told, this doc could rank with the best of the “30 For 30” series.

(6) Charismatic – Nov. 1
-This may be another surprise on the Fall schedule because “Charismatic” deals with the former sport of kings, horse racing.  Since Affirmed in 1978, there have been 11 horses who’ve come up short in the Belmont Stakes when seeking the Triple Crown.  One of the most dramatic near misses came in 1999, when Charismatic finished 3rd after pulling up lame near the finish line, ending his racing career.  If the doc goes more into the other near misses in the 33-year drought and takes a more global look at horse racing, then it could be a real winner.  If the focus is too narrow on Charismatic (although a great story with troubled jockey Chris Antley) it may fall short of its full potential.

-The title says it all, examining the blood rivalry between Auburn and Alabama in college football.  However, how this documentary views the rivalry can take many forms.  Will the director completely pull the curtains back on the ugliest rivalry in sports?  Will the darker side of impassioned college football fanatics be exposed?  What about the Toomer’s Corner incident?  What about Clay Travis getting death threats from Alabama fans after his reporting of a potential scandal?  If the doc seeks to expose the true nature of how caustic this rivalry and college football fans in general have become, then it could be a classic.  But, if ESPN seeks to glorify the rivalry or hide behind the SEC on ESPN banner, then it could be a self-indulgent piece of garbage… Roll Tide.

Watchability Scale: Give it a chance