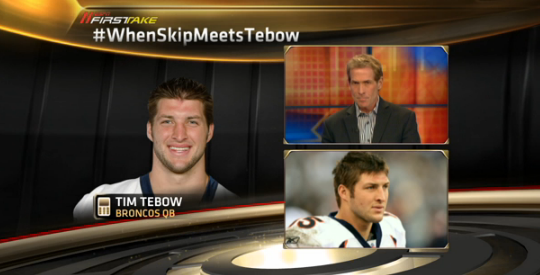 The build-up to Skip Bayless interviewing Tim Tebow yesterday on ESPN2’s First Take was the most nauseating thing I’ve seen on television since Donovan McNabb blew chunks in the Super Bowl.  I’ve said my share on First Take and Tebow here before so there’s no sense rehashing in any great detail.  I’m a fan of Tebow the person.  Tebow the quarterback I really don’t care much about.  He can be decent if given a chance, I suppose (see, not everyone has to live and die with their opinion on Tim Tebow).  However, it’s what the media has done in obsessing about Tebow that is just gross.  First Take is proudly the chief offender.  Each and every day there is a new topic (or topics, God forbid) for Skip Bayless to pantomime fear/shock/ecstasy in defending Tebow against evil hoardes of apocalyptic monsters.  Wash.  Rinse.  Repeat.

Sure, it’s fun to mock First Take and TebowMania (especialy when the first attempt at the Tebow interview failed epically yesterday), but it really is maddening to believe ESPN plays along with this each and every day.  What’s also maddening was the drama surrounding the Tebow interview by Skip.  It was even given its own hashtag – #WhenSkipMeetsTebow.  Jay Crawford trumpeted Skip Bayless and First Take trending on Twitter yesterday morning (notice he conveniently didn’t tell you why).  The hoopla surrounding the interview was that it was billed as the “first meeting” between Tebow and his biggest cheerleader, Bayless.

Supposedly, Skip had refused to meet Tebow to keep his journalistic integrity.  (I’ll give you a second to stop laughing.)  He admitted as much before the interview regarding the chance of an encounter earlier this year:

“To keep my objectivity, I’m going to politely say no.”

Which leads to the video below.  Yesterday morning was not the first “meeting” between Tim Tebow and Skip Bayless.  First Take, ESPN, Bayless, and everyone else was misleading you in incessantly hyping this thing in such a way.  Hard to believe for a show with such an pristine reputation, I know.  This is the same program SI’s Richard Deitsch referred to as “the morning equivalent of hell.”  The amazing aspect of this facade is that Skip’s previous meeting with Tebow happened… on FIRST TAKE ITSELF… IN JUNE OF THIS YEAR!!  Watch!

What’s even more hilarious is that Bayless actually referenced their prior meeting on First Take in yesterday’s segment!  You’ve got to be kidding, right?  No, he did!

“Back in June you did call me out about my clutch gene on the golf course so you owe me a golf date Tim Tebow and you will pay for that comment.”

So how can #WhenSkipMeetsTebow be their first meeting when we have this shot from the show in June of them talking to each other!  (Never mind the mental images of a Skip & Tim “golf date.”) 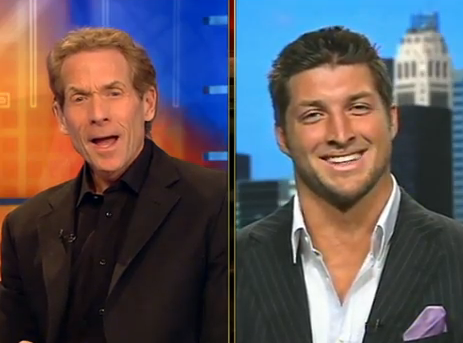 That happened!  I’m just so disappointed in ESPN and First Take that they would try to fudge their endless promotion machine in desperately making Skip Bayless a part of the story.  I can’t believe their clever Twitter hashtag wasn’t really all it was made out to be.  Why… if First Take is willing to stretch the truth to this extent… what can I believe as a sports fan anymore.  I think I’m gonna freak out.