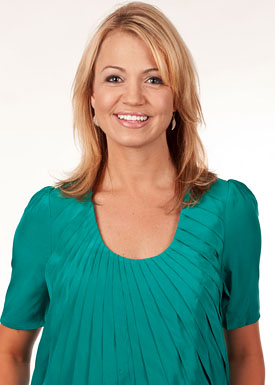 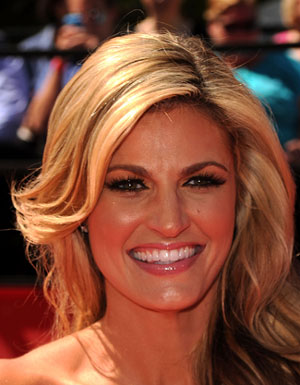 Throughout the summer months, the rumblings of a feud between attractive, blonde ESPN superstar Erin Andrews and attractive, blonde ESPN superstar Michelle Beadle has sent the internet, and 18-35 year old males particularly, into a frenzy.  It all started when Beadle admitted in the ESPN Book that she watched the infamous Erin Andrews peephole tape and more or less stated that a congenial relationship between the two was non-existent.

Then came the rumors and reports pitting Beadle and Andrews against one another in some sort of cosmic tug of war over who was the fair-haired favorite inside Bristol headquarters.  Andrews is the wholesome celebrity figure who is as recognizable on Dancing With The Stars or Good Morning America as she is on College Gameday.  Conversely, Beadle is the upstart guys’ girl who has burst onto the scene the last couple years on SportsNation and other outlets.  (Hey, I would look a lot better too sitting next to Cowherd five days a week.)

Well, wouldn’t you know that rumors of the “feud” intensified when Beadle took on a starring role in the lead-up to this year’s ESPY awards.  Deadspin, who has emerged as one of the go-to places for BeadleMania, went to her directly to refute rumors that Beadle was trying her best to relive the sex and drug filled early days of ESPN in Los Angeles after the ESPYs.  Beadle firmly denied the whispers going around the block that she had been involved with Packers stars Aaron Rodgers or Clay Matthews.

Then, a Youtube video came out of Beadle and Matthews… WALKING TOGETHER!!!!  Because you know, when people walk together, there’s bound to be something bigger and much more salacious going on.  But the intriguing aspect to the whole Beadle/Packer/ESPY story was that some naughty, nosey person was sneaking around ESPN mongering up all these rumors to begin with.  Beadle expressed her displeasure on Twitter yesterday…

ESPN_Michelle Remember kids: when you spread lies and rumors, it comes back to bite ya in the arse. And ask yourself why you’re so unhappy 🙂 Happy Wed!

So as you can imagine, the “story” has taken on its predictable next step.  The sports gossip site TerezOwens.com has a source that says it was of course Erin Andrews that snitched to ESPN brass about Beadle’s supposed escapades.  Sigh.

So what do we have here.  Someone at ESPN tried to tattle on Beadle’s alleged raunchy behavior at the ESPYs.  Beadle defended herself to Deadspin.  (Which is a great move on Deadspin’s part, and a bit subtler of a way to get a leg up on their rivalry with ESPN.  You think Bristol is happy to see Beadle opening up and giving info to Deadspin?)  And an unconfirmed, random rumor from a self-proclaimed sports gossip blog that says it was EA who snitched on Beadle (one that is barely believable and has deservedly been given no credibility thus far).

So in the grand struggle of Beadle vs Andrews… who cares?  That was the sentiment of the vast majority of the folks that responded on Twitter to us this afternoon (outside the predictable male chauvinist crowd that wants to see this “feud” settled in mud).  Beadle and Andrews are adult enough to live their own lives (I think) and it doesn’t matter to 99.9% of sports fans what either one does in their personal lives, who’s telling on who, and which flavor of the month ESPN’s hierarchy favors.  The entire Beadle/Andrews narrative has smelled of tabloid sports journalism from the beginning and I just want it to stop at this point.  Hopefully this “feud” doesn’t get anymore legitimate play in the blogosphere, or else we might as well all send in our resumes to the National Enquirer.