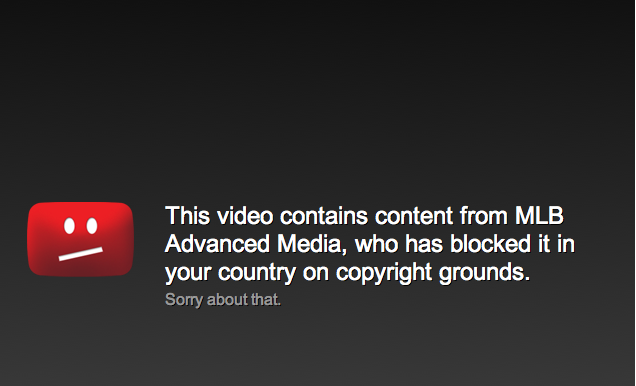 What an awesome game that was.

A game, a series, and a moment to be remembered and celebrated no doubt.

To the surprise of many, Joe Buck gave the moment a nice touch by giving the walk-off home run a call that paid tribute to his dad’s call in a World Series game with similar circumstances almost 20 years ago to the day. Some didn’t like the call, but most seemed to think the beleaguered Buck rose to the occasion for this historic baseball moment.

The blogosphere and Twitter exploded with glee as baseball had a crescendo moment in what has been a postseason that has been played under the ominous cloud cover of terrible television ratings and in particular the continued aging of the baseball’s post season audience. This postseason, MLB’s average viewer is reported to be somewhere around 53-55 years old and has been the subject of endless banter on sports radio as that number has continued to climb at an alarming rate over the last decade. The bottom line, older people continue to watch the World Series but younger people haven’t tuned in to keep the stat at a healthy median age.

Enter David Freese’s home run which popped up on endless websites including this one. You can find articles just like ours in addition to the Sporting News, Larry Brown Sports, Sports Grid, Cards Diaspora, Big Lead Sports, Midwest Sports Fans and thousands of other publishers as well as social network accounts.  With the general web and many of these sites in particular skewing towards a younger audience (well below median age of the World Series viewer), you would think that hundreds of thousands if not millions of people sharing this moment across the web would be a good thing. 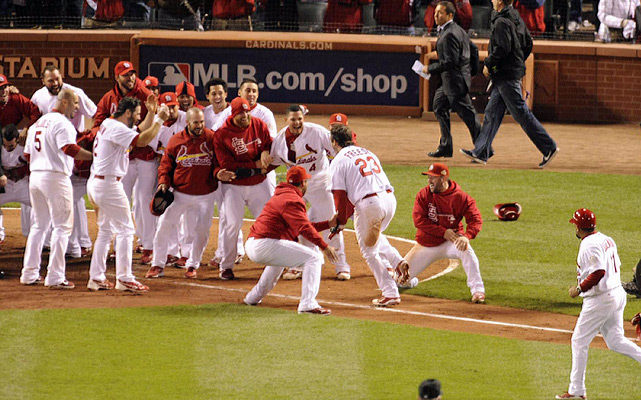 MLB Advanced Media stepped in with their ridiculous policy to not only make the clip only viewable on MLB.com (no embedding although they recently started making some non-baseball clips embeddable after substantial grumblings from the web), but also relentlessly working to rip the clip down wherever spotted. The end result is COUNTLESS articles, links, tweets, etc pointing to places without the highlight people want to see.

Within hours, the clip is already hard to find unless you intuitively make the journey to mlb.com where you’ll get a healthy dose of advertising and help pad their stats.

That’s not a bad thing really though. It’s their clip, they’re making money, and you can’t argue with that right?

I hate to be that smart-ass who goes on these preachy rants, but this is incredibly moronic.

The bump MLB gets in terms of revenue and measurable benefits by the added traffic is just a drop in the bucket for them. Let’s say that perhaps they get a half million plays of the video and they’re able to make a $5 cpm, meaning $250,000 in ad revenue. Let’s say just getting a lot more new visitors to the site is worth something too (because it is) and maybe you put a price-tag on that “marketing” value at some other sexy amount. Very respectable, but still that PALES in comparison at the opportunity spoiled of tapping into a younger audience with that clip.

This is a sport that should be DESPERATELY courting younger people to become interested in the sport. Those within sports media circles talk about this at length and nobody really seems to have a good idea or prediction on how and when MLB’s aging and declining audience problem will bottom out. It’s believed to be a serious long term problem by most and not just a decade long “fad”…

Last night’s game and ending was something that captures people’s attention and builds excitement for tonight’s big game. It will be the most talked about thing this morning regardless of age and it will spill over to tonight. 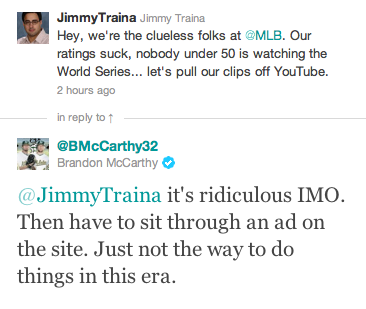 But MLB pulled the plug on some of that much needed buzz because there is a “policy.” The other leagues have their own policies, but nobody hunts down video like MLB. I’m sure having a video gestapo costs them money too.

It’s just ridiculously odd that boxing and MMA PPV events that you pay large amounts of money for are easier to find right after they happened than a baseball game.  That’s how inaccessible MLB makes the game from the casual younger fan who might have seen the clip on his or her Facebook news feed, Twitter timeline, or favorite blog.

I feel like I am watching someone with lung cancer smoking a pack a cigarettes as MLB marketing group only compounds their morbid outlook. I would say I am shocked, but then again, this is the same group who brought us Written In The Stars Squirrel Edition, thinking it was a good idea. MLB Advanced Media is also the super social media savvy group who started a twitter account, made a nice background, and then protected their tweets from the public.

MLB has a lot of issues and there isn’t a silver bullet to fixing them all at once. However, here is a start. Let people celebrate your sport all over the web and not just under your strict supervision on mlb.com.