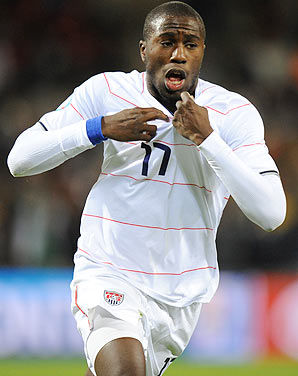 Last week we told you World Cup TV rights in 2018 and 2022 were up for grabs as ESPN was in competition with Fox and NBC.  ESPN was seen as a firm favorite to retain the World Cup rights given the success the event has brought the network, the deep pockets in Bristol, and the passion ESPN #2 John Skipper has for the sport.  However, in an upset the likes of Senegal over France, Fox has come from nowhere to win the rights for all FIFA events from 2015-2022 including those World Cups.  Here’s the report from John Ourand at SBJ…

The FIFA World Cup will have a new U.S. TV partner in ’18 and ’22, with several sources saying that Fox will pick up the English-language rights. FIFA has informed the bidders and is planning to announce the winners at some point today or early next week. The decision to award the rights to Fox is a shocking development, since incumbent ESPN was widely believed to be the front-runner to retain the World Cup rights.

I only pegged Fox at 20% last week, so this is definitely a surprise.  Fox has been agressive in going all-in with soccer the last couple years.  They got the Champions League away from ESPN, have rebranded and put money into updated sets and graphics for Fox Soccer, and have even gone as far as putting taped EPL games from Sunday mornings on Sunday afternoons in an NFL window.

I am frankly shocked ESPN let the World Cup go considering all the factors above.  This is a company that hates losing more than it loves winning.  It’ll be a bitter pill to swallow seeing how they have helped to build the World Cup into must see television here in the states.  Now, Fox will get to profit off ESPN’s investment into the World Cup and the sport of soccer.  ESPN sent along this statement to AA regarding the news…

“We made a disciplined bid that would have been both valuable to FIFA and profitable for our company, while continuing to grow our unprecedented coverage of the World Cup and Women’s World Cup events. We were aggressive while remaining prudent from a business perspective.  ESPN remains committed to presenting the sport of soccer at the highest level across our platforms with coverage of the UEFA European Football Championship, English Premier League, La Liga, MLS and other top leagues and tournaments, including the 2014 World Cup in Brazil.”

It’s unclear at this time how much Fox broke the bank for these World Cup rights and where ESPN’s cutoff point was in the bidding process.  While the effects of this bid won’t be felt until after the 2014 World Cup in Brazil, this is a landmark moment for the course of televised soccer and the sport in general in the United States.  Let’s try to make sense of what the World Cup’s move from ESPN to Fox may mean for all the parties involved…

What a coup for Fox Sports.  If soccer continues its trend upwards in this country, the 2018 and 2022 World Cups will be ratings bonanzas.  While ESPN has been getting all the credit for their soccer coverage, Fox is slowly building a soccer empire.  They will now have the EPL, the Champions League Final, and the men’s and women’s World Cups all on broadcast network television.  Even five years ago, this would have seemed preposterous, but that’s the kind of growth top-notch international soccer on television is experiencing in this country.

But here’s the rub.  Fox Sports has been atrocious in televising major soccer events.  Not so much in the commentary department (more on that in a second), but in how they present the sport.  Does anyone remember this nightmare?

If Fox treats viewers of the World Cup with the same ignorance and stupidity, then this will be an atrocity that will make the BCS on Fox look like Citizen Kane.  Seriously Fox, it’s on you to rid yourselves of the gimmicks and the dumbed down soccer broadcasts.  No robots.  No infrared cameras.  No “football vs futbol.”  Give World Cup viewers at least a shred of respect that they know what sport they’re watching and that soccer is a legitimate American sport.

As for announcers, Fox is likely to transplant Sky Sports announcers from the UK as a Newscorp company.  In fact, Fox has used the Sky feed for their Champions League games on Fox and Fox Soccer so far.  In the UK, Sky Sports isn’t actually allowed to broadcast the World Cup Finals as it must be broadcast on free-to-air television – BBC and ITV have shared WC rights since 1966.  The announcing landscape for 2018 is too foggy to really analyze though, considering top names like Martin Tyler and Ian Darke may not be around in seven years time.  I’d expect Fox to go the ESPN route and hire a few names that will work for the network full-time and import some of Sky’s top play by play men when the time comes around.  Joe Buck or Gus Johnson are not announcing the FIFA World Cup Final.  Although we can secretly hope for Gus shouting “GOOOOAAAALLLL!!!!”

As important as the deal is for Fox, it may be even more important for Fox Soccer.  Imagine the type of pull that network will have moving forward if they are televising live men’s and women’s World Cup games.  Granted, Qatar and Russia aren’t the kindest locations for live sports events. (Unless you want to wake up at 6 AM on the east coast that is – it’s an 8 hour time difference from Moscow to New York, seven from Doha.)  But the under the radar factor in this deal is Fox gets all FIFA rights from 2015-2022 including the age limited tournaments.  That’s hundreds of hours of games Fox Soccer didn’t have just hours ago.  Fox Soccer must continue to professionalize its coverage though.  They already upgraded their studio and graphics significantly, but the channel must get rid of some of the local accessy technical difficulties and get higher quality production.  If that happens, and more top television personalities are brought into the fold, the channel has a chance to become mainstream.

ESPN’s soccer lifeblood was the World Cup.  I’ve continually said World Cup 2010 in South Africa was the pinnacle of ESPN’s abilities.  ESPN, or any other network, has simply never covered an event better.  ESPN finally gave soccer fans and sports fans the intelligent, in-depth coverage that was worthy of one of the world’s biggest sporting events.  For ESPN to lose an event they have become so synonymous with is a major blow.

Where does ESPN go from here?  As long as Senior VP John Skipper is in charge, soccer will continue to be a mainstay in Bristol.  Nothing will change in the next few years regarding ESPN’s superior soccer coverage with the EPL, MLS, US National Team, and 2014 World Cup.  However, afterwards I would expect ESPN to more fervently pursue the European club game and make an even bigger commitment to the EPL and others.  Getting back the Champions League from Fox would soothe the pain of losing the World Cup ever so slightly.  ESPN can build heavily on those yearround leagues as “the best soccer in the world,” which is true.  Nevertheless, not televising the men’s and women’s World Cups is a massive loss for ESPN.

The Peacock, as too often has been the case in the last year, is left out in the cold.  What now to make of their commitment to MLS and the US National team?  NBC just gave MLS a lifeline with a ton of games on what will be NBC Sports Net next year and broadcast network time.  But, the agreement is only for three years.  With the bigger prize of the World Cup out of the picture, how much does NBC put into MLS?  Do they feel some foothold in the growing soccer landscape is better than none?  Both NBC and MLS are hoping their agreement does for the league what NBC’s arrangement with the NHL did, but it puts more pressure on both to have this be a success right away.  Otherwise, NBC will move on and MLS will be looking once again for a new, dedicated TV partner.

Here’s the tough news.  Given Fox’s track record, this is a bad day for soccer fans.  ESPN’s World Cup coverage has been the gold standard.  Fox’s international soccer coverage has resembled something you would see on Nick Jr.  Additionally, with soccer seemingly spread out across several networks now, it may be harder for viewers to find that go-to place soccer can call home.  It is encouraging to see so many networks pursue more soccer, but the games and leagues are spread thinly across ESPN, NBC, and Fox.  In the end, Fox is challenged with surpassing ESPN’s presentation, coverage, production, and announcing.  Considering what we’ve seen in the past, it’s going to take monumental improvement to do so.  Until Fox shows soccer fans otherwise, I have my doubts.

On the bright side, at least there are no bands at soccer games.