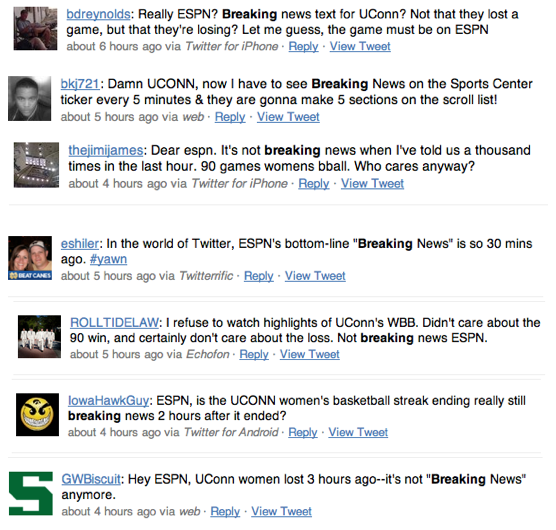 Maybe a little bit nit picky, but I’ve heard a lot of people complaining about this over the past couple of weeks.

News organizations like CNN, ESPN, Fox News, CNBC all use scrolling tickers to inform the public of what’s going on in their particular niche (world news, sports news, financial news, etc). Typically you’ll ignore the scrolling bar of information if you’re engaged with the program currently on, but often keeping a watchful eye out can inform you of a story or some nugget of information that might have slipped through the cracks of your day. 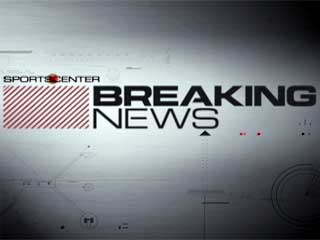 But what can really grab your eye is the flashing graphic of “Breaking News”. Depending on the channel you’re on, it can be an assassination, a company declaring bankruptcy, or Brett Favre getting fined nothing for being a dirt-bag.

Lately, though, ESPN seems to have taken extreme liberty with their Breaking News alerts on the bottom ticker. It’s been something I’ve seen complaints about in the past, but today was a perfect example.

Midway through the second quarter of the Holiday Bowl, ESPN cut away from the game to show the conclusion of the UCONN and Stanford game in which UCONN’s record win streak came to an end. Husker Nation was NOT happy and you don’t want really want to mess with Husker Nation. That’s another debate as ESPN was giving lots of game updates through out the night, utilizing the ticker with the Breaking News effect, and it was on an ESPN channel so you could have watched it if you really wanted to.

ESPN finished up the first half repetitively showing long winded scrolls labeled as Breaking News and led their halftime show with a recap of the historic game.

The Breaking News flashes continued through halftime and almost the entirety of the second half. I stepped away to dominate some friends in a board game which sounds really nerdy and didn’t note at what time ESPN stopped vigorously pumping the story as Breaking News.

I want to be frank that I’d feel the same way if it was a men’s sport. It’s not that it’s not important if extremely newsworthy, it’s just that at a certain point it’s not Breaking News. Especially if you’ve shown a large part of your audience the game itself, highlights during halftime, and multiple cutaways to studios to comment on the news.

At one point it was breaking news, but at a certain point we’ve comprehended the story and nothing new has really occurred. Details aren’t still coming in.

UConn Lost. They haven’t for a really long time. The streak is historic on many levels and now it has ended. But in the 3 hour span the news was labeled as breaking I could have driven to Maples Pavilion (where the game took place) and back 6 different times from my residence a bit south of Palo Alto.

Stop distracting me from watching something by making me think there is a new, extremely fresh, big story that is actually breaking/unfolding/happening right now this very minute. I think the best tweet is from Eshiler, who says “In the world of Twitter, ESPN’s bottom-line “Breaking News” is so 30 mins ago. #yawn.” It’s true and, as the “Breaking” News gets more stale, the annoyance and distraction levels of it only increases.

What are your thoughts? Am I too neurotic on this one or is this really annoying to you, too? Leave a comment and vote in the poll on the side-rail with your opinion.