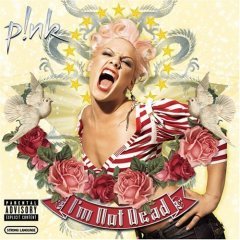 I’ve waited a little while to comment on this….but I truly wasn’t aware Pink was still alive. Now we are all aware that music choice for games and intros is always suspect (I feel like my father is in the board meeting, and he’s insisting on Three Dog Night as the opening act), but seriously since when have Pink and P-Diddy been relevant?

I’m not as much “up on the times” as I used to be, but I consider myself a pretty knowledgeable authority on Pop music. So I have a few questions/statements for NBC….you never know who’s reading right?

1. In the funny, but true category…..I looked up Pink’s last album and it was entitled “I’m Not Dead”…how about that for coincidence. But seriously NBC…..when someone has to name their album that…..you might not want to hire them (even if they do come at a discount).

2. Pink called out Britney and Christina in her “Stupid Girls” video (interestingly right before she fell off the face of the earth). Do you know how many albums Pink has sold since her Album debuted in April? 475,570….not bad right? Mrs. Aguilera had 346,000…..in her first week!!! Damn, she IS stupid.

3. The only reason anyone knows who P-Diddy is anymore is because of that Making the Band show on MTV….which is HORRIBLE! Are you trying to revive people’s careers now?

4. (Unfortunately) I know a little bit about Country Music (I equate that to living in Virginia). The Rascal Flats are huge…..actually gigantic. “Me and My Gang” came out the same month as Pink’s album and is 2x Platinum. There’s one song from the album that they play across all radio stations in Virginia….you’ve probably heard it. It’s that sappy “What Huuuuuurts the Mooooost……was beeeeeeing sooooooo clooooooose.” Well is that the song NBC has them play??? Nope….another good choice.

5. F-you NBC for making me do 30 minutes of Billboard Research on Christina Aguilera, Pink, P-Diddy, and The Rascal Flats.
______

(As much as it pains me to say this) I feel a little like Bill Simmons here, but can we get some advisors or something to do these intros and musical montages? I mean 9 times out of 10 it’s U2 anyways……just hire me for that one time.

Ahh, what am I saying?…..I’d probably personally sabotage the montage by playing “Lips of an Angel” by Hinder, during a Tom Brady Piece, within the Week 3 Broncos/Patriots matchup. Screw it NBC stick with Pink (as you can see below…..SHE ROCKS!)