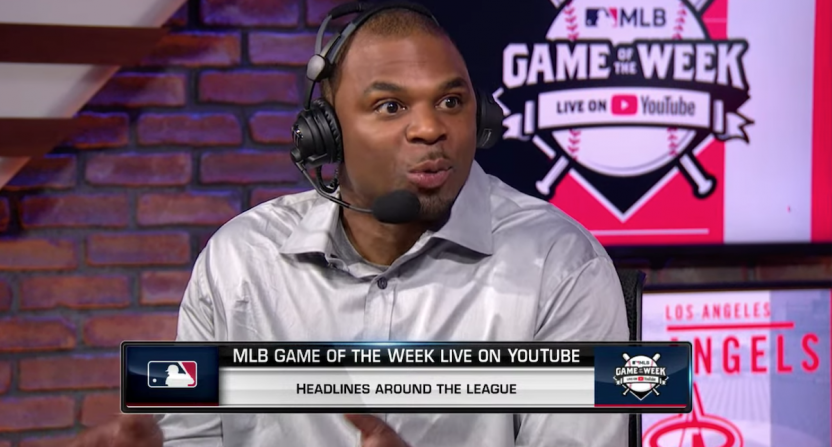 Broadcasting is not easy. Maybe that’s a mixed message coming from a site called “Awful Announcing.” But though we like to poke fun, most of us know how difficult talking into a microphone and looking into a camera, clearly conveying coherent thoughts with a smooth delivery can be. Especially for those who haven’t done so before.

So when we point out that former major-league outfielder Rajai Davis had a rough debut as an analyst on YouTube’s MLB Game of the Week broadcast Thursday night, it’s done with sympathy. But even the most compassionate, objective viewer would have noticed that one of the announcers calling the Detroit Tigers-Los Angeles Angels broadcast wasn’t doing so as comfortably as the other two.

Davis was paired with play-by-play announcer Matt Vasgersian in an MLB Network studio with Mark Gubicza on-site at Angel Stadium. Vasgersian and Gubicza are the Angels’ regular TV broadcast team, so they already have a familiar partnership. It was bound to be a bit awkward with Davis working in.

Perhaps the most obvious example of Davis’s broadcast inexperience came in the third inning while Angels superstar Mike Trout was being interviewed in the dugout. When it was Davis’s turn to ask a question, he lost his train of thought and blanked on what he wanted to say.

Put kindly, that was excruciating. Everyone involved was patient with Davis as he tried to collect his thoughts. Trout himself broke the tension by joking that Davis had “a good start” when Vasgersian explained that this was the analyst’s first game as a broadcaster.

We don’t know what Davis may have been dealing with on the production end. And if he didn’t do so, you could say that he should’ve had questions prepared beforehand. (Maybe he did and he misplaced those notes. We just don’t know.)

Once Davis remembered his question, however, what he asked about Shohei Ohtani (the Angels’ starting pitcher Thursday and the sensation of the 2021 MLB season) could be viewed as trivial at best and racially insensitive at worst.

Rajai Davis to Mike Trout on Shohei Ohtani: “Does he speak English?” pic.twitter.com/sa23iEdgm5

The guess is that Davis didn’t intend to ask Trout if Ohtani speaks English, but maybe that thought popped into his head as he was trying to compose his question. Wondering whether Ohtani can directly communicate with his teammates, rather than through a translator, is a valid question but it certainly could’ve been phrased better.

Davis seemed to be moving toward insight on Ohtani’s personality before he blurted out the question about speaking English. So he ended up asking about a possible language barrier interfering with how Ohtani gets along with everyone in the Angels’ clubhouse.

Of course, plenty of viewers noticed Davis’s struggles during the telecast and shared their opinions on Twitter. Maybe even more than usual since the Tigers-Angels game was broadcast exclusively on YouTube, so the audience was already online. Here’s a small sample:

I never comment on baseball commentators, but Rajai Davis. Yikes! ?

Rajai Davis forgot what he was gonna say mid-sentence, went dead silent, then all 3 guys talked at once

Rajai Davis on this Youtube broadcast is pretty tough to listen to, which is sad to say. He seems like a great dude, just not a fantastic fit in the booth :/

Was the plan for Davis to eventually take part in one of the exclusive YouTube MLB broadcasts or was this decision made more impulsively, putting Davis in a position for which he may not have been entirely prepared? Perhaps more will be revealed and we’ll try to get some clarification if we can.

Davis took a position with MLB earlier this year as Senior Director of On-Field Operations, working on rules changes, amateur baseball, and mentoring of minority players. But maybe someone in the MLB offices thought Davis and a wonderful personality that’s endeared him to everyone he’s worked with would be good for broadcasting. Maybe Davis wanted to take a shot at it himself, viewing it as a possible future career option. As a 14-year MLB veteran, he has plenty to share.

We don’t know the circumstances, other than acknowledging that the YouTube telecasts are a good platform for experimentation. And MLB has tried to create more relaxed, conversational broadcasts this season, notably with its “Clubhouse Edition” telecasts.

Pairing Davis with a personable, conversational broadcaster like Vasgersian who could lead him toward analysis or storytelling was a good idea. He’s had similar experience with novice analysts like Alex Rodriguez. And Gubicza could fill in with more traditional analysis when necessary, especially since he’s familiar with the Angels. Davis was in a safe place.

Most professionals who put on the headset to announce sporting events might make it appear and sound easy because of their experience. But fans and critics who think they could do a better job, who believe they’d do well because they talk sports with their friends, would likely be surprised to turn on a mic, hear producers in your ear, look at monitors and soundboards, and realize that thoughts may not go from your brain to your mouth so easily.

If Davis does another broadcast, perhaps he’ll do better on his second try. There is certainly plenty of room for improvement. You can watch the game for yourself on YouTube and draw your own conclusions.