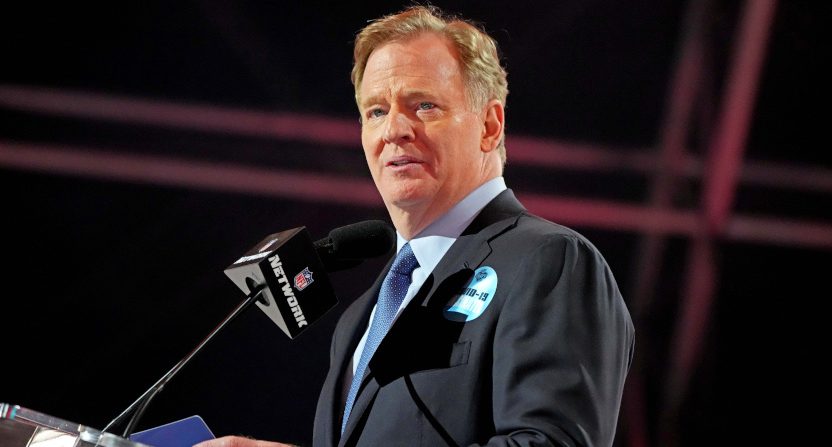 The deal announced Thursday for Google to take over the NFL Sunday Ticket package for upwards of $2 billion a year (a reported $2 billion annual base, with potential extra fees at benchmarks and then extra revenue from the to-be-sold commercial package) is a huge one for the league. That package of out-of-market games and whiparound service RedZone is set to be available both through virtual multichannel video provider YouTube TV and standalone through YouTube Premium Channels. Neither of those prices has been announced yet, and many questions remain about specifics of this deal. But it looks like a win for the league on both overall revenue and diversity of partners, and it adds to the media empire the NFL has built.

On the revenue front alone, the new Sunday Ticket deal sees the NFL get significantly more than the $1.5 billion a year DirecTV was paying. And it sees them get that from seemingly the last bidder standing after Apple backed out of talks, Amazon didn’t make a comparable offer, and Disney/ESPN didn’t even enter the final bidding (despite earlier reports). That’s impressive enough in its own right, especially as the math looks tough for Google from the outside (although a lot remains to be seen on pricing, including if single-team/single-game options are included). And that is ultimately the biggest takeaway here; one of the largest media companies in the world has paid a high price to enter into a partnership with the NFL.

NFL rights were once restricted to broadcast television, but over the past decade the NFL has exponentially expanded its media empire and relationships with a diverse number of traditional and streaming media partners. Following this deal with Google, the NFL now has domestic broadcasting partnerships with the #3 (Google parent Alphabet), #4 (Amazon), #40 (ABC/ESPN parent Disney), and #45 (NBC parent Comcast) U.S.-based companies by market capitalization. Their deals with the other broadcast networks, CBS and Fox, are with U.S. companies with the #401 (Fox) and #519 (CBS parent Paramount Global) market caps. Those are most of the largest and most powerful companies in the world with a media dimension, with #1 Apple and #318 Warner Bros. Discovery really being the only major U.S.-based companies with a sports broadcasting presence who don’t currently have NFL deals.

And the shift here from DirecTV (70 percent owned by AT&T, #54 in market cap) to Google is a significant gain in terms of  who the NFL is in business with. That’s especially true with many bearish on the future of DirecTV as cord-cutting increases. The NFL has non-broadcasting partnerships with many other big companies, too, including #2 Microsoft (for tablets) and #1 Apple (for the Super Bowl halftime show). Of course, the broadcasting side alone could look even better on the market cap front if they’d landed with #1 Apple ($2.01 trillion vs Alphabet’s $1.13 trillion). But Google was reportedly willing to pay more, and that matters as well.

There are further advantages to the NFL in shifting Sunday Ticket from DirecTV to Google, too. For one, this will now be available to anyone with high-speed internet, as long as they’re willing to pay for it as a YouTubeTV add-on or buy it separately through YouTube Premium Channels. High-speed internet access isn’t universally available, of course (a 2021 FCC report estimated 19 million people out of the U.S. population of 331 million don’t have access to high-speed internet). But it’s more available than satellite TV, which comes with all sorts of limiting factors from location to surrounding trees to landlord/homeowner approval. Yes, DirecTV has been phasing out its satellites and shifting towards streaming itself, and the “DirecTV” unit includes Uverse (cable) and DirecTV Stream. But YouTube TV still appears easier to get than satellite DirecTV, and Sunday Ticket itself was only available for streaming under specific and limited circumstances under the old DirecTV deal.

That doesn’t necessarily mean it’s assured more people will subscribe to Sunday Ticket in this new era. The to-be-revealed pricing options will impact this. And YouTube TV’s current subscriber base of around 5 million isn’t huge; DirecTV had around 13 million, and only around two million subscribed to Sunday Ticket. So if the percentage of those with the MVPD who buy Sunday Ticket on top remains equal, that’s going to be a notable drop. But there is also going to be the standalone YouTube Premium Channels option, and there will likely be people who switch to full YouTube TV just for this. And there do seem to be some lower access barriers here, although much of that depends on the price. The NFL is certainly working with a larger and more powerful company, and a company who is much more bullish on its future than its previous partner.

This new Sunday Ticket deal also helps get the league get closer to its annual revenue goals. Back in 2011, it was reported that NFL commissioner Roger Goodell (seen above at the 2021 NFL Draft) wanted to reach $25 billion in annual revenue by 2027. While at the time that may have seem like an out-of-this-world number, in broadcasting revenues alone the league is now set to get $10 billion a year from CBS/Fox/NBC/Disney/Amazon beginning in 2023 with another $2 billion at least from Google. Those immense numbers go a long ways towards getting them to that goal. And the added boost from working with Google may help further.

The NFL having domestic broadcasting deals with six major companies is unprecedented. Most major North American leagues have two to three domestic broadcast partners, including streaming. College football as a whole has more, but that’s because its deals are conference-by-conference. And it doesn’t currently have Apple or Amazon involved, although that may change. The NFL has these six deals, which are with many of the world’s most powerful media companies. And it also has its new owned-and-operated NFL+ over-the-top service for streaming to phones and tablets with live audio, NFL Network shows, NFL Films content, and more.

The numbers of NFL broadcasting deals, how much they’re for, and who they’re with are all important. All those factors show how much value broadcasting companies (or, in the cases of Amazon and Google, tech companies with a broadcasting/streaming element) continue to place on NFL content. And that makes some sense, considering the audiences the league continues to command despite the challenges much of the traditional TV environment is facing. The NFL is clearly a league these massive companies want to be in business with, and the companies are willing to pay handsomely for that privilege. And that helps the league on both a revenue side and a partnership side, and further bolsters their media empire.