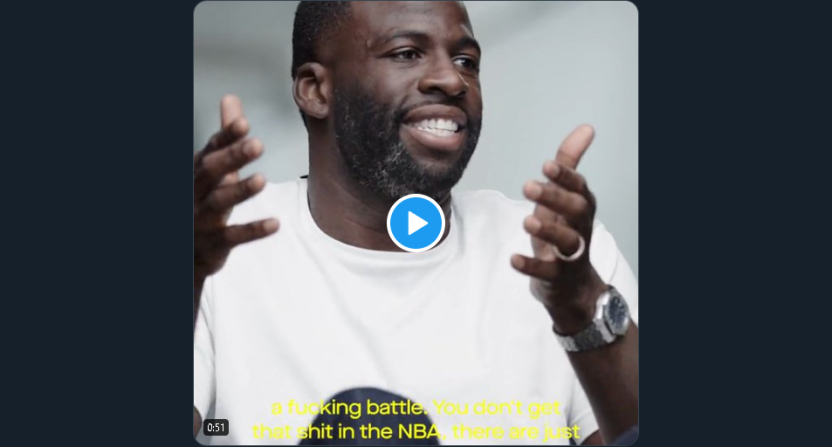 Prominent “new media” advocate Draymond Green has been providing no media of any kind since initial reports Wednesday of him hitting Golden State Warriors’ teammate Jordan Poole in practice, which were followed by the release of that disturbing video Friday. Green is often known for his criticism of NBA and media figures on Twitter and on his podcast, and for his shunning of “old media” members to go talk on his podcast (when he’s not having testy interactions with those media members). But Green’s last tweet was Tuesday, about an upcoming podcast with Patrick Beverley that was set for Thursday:

Just wrapped the interview for this week with @patbev21 for the Draymond Green Show and WOW ????????. Check it out Thursday https://t.co/3ttAzgGRtq

First guest back on the show, possibly the best one yet ???

That podcast did finally come out Friday, after lots of discussion of its delay. But, as it was recorded Tuesday, it doesn’t address Wednesday’s incident. And Green hasn’t broken his Twitter silence to discuss it. However, something else with a quote from Green showed up on Twitter Friday.

That would be an episode of Uninterrupted’s The Shop that dropped Friday on YouTube. And the particular on-screen text they showed of Green talking about the “f***ing battle” of the Michigan State-Michigan rivalry and how “you don’t get that s**t in the NBA”  was an interesting choice considering the news about his physical altercation in a NBA practice this week (with a player, Poole, who played college basketball at Michigan):

There’s nothing like a college sports rivalry. ? @money23green shares why he wouldn’t go back and change anything about his four-year career with @MSU_Basketball on a new episode of #TheShop. Out now on our YouTube. ?

There’s some logic to Uninterrupted still posting this episode as planned. This is a shot-in-advance show, with the episode description noting it was “filmed in front of a live audience at the LeBron James Innovation Center on the campus of Nike’s World Headquarters in Beaverton, Oregon.” And it doesn’t just feature Green (if it did, this might presumably have been bumped), but also Lisa Leslie, P.J. Tucker, Paul Rivera, Maverick Carter, and James himself. And there hasn’t yet been any punishment for Green from the Warriors or the NBA.

But with all that said, the promotional choice of featuring Green in a tweet about this was certainly a choice. Especially with all those currently-less-controversial other people who could have been featured. And an even more unusual choice was not only choosing a particular clip with Green talking about the “f***ing battle” of a college rivalry (and how “you don’t get that s**t in the NBA”), but choosing to put that particular part in the on-screen text.

That’s certainly going to lead to some more attention and engagement than normal for this Uninterrupted tweet. And it might even lead to more people watching that clip or even that full episode. But it’s definitely an odd thing to see about Green amidst the current, very different discussion around him. And it’s an odd thing to see with him being so quiet himself about what happened this week. If athletes like Green are determined to be the “new media” and get their stories out without a filter, radio silence isn’t necessarily going to do that.